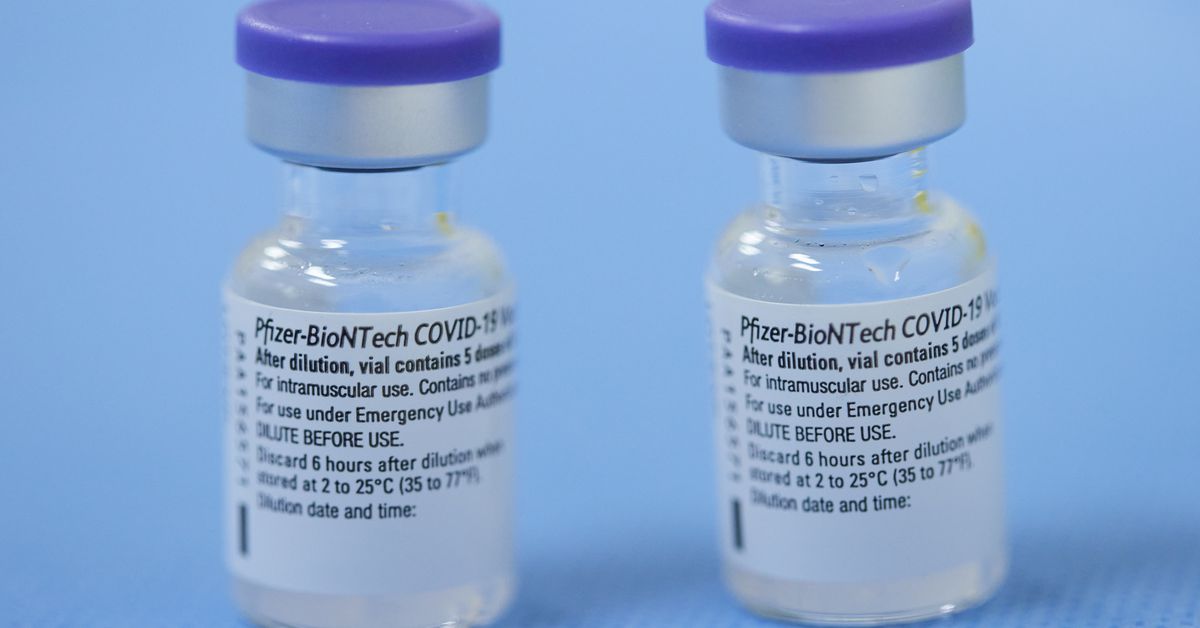 Vials of the Pfizer-BioNTech vaccine are pictured in a vaccination centre in Geneva, Switzerland, February 3, 2021. REUTERS/Denis Balibouse/File Photo/File Photo

Britain will buy 60 million more doses of Pfizer/BioNTech’s (PFE.N), COVID-19 vaccine, health minister Matt Hancock said, in a deal that more than doubles the country’s supply of the shot ahead of a booster programme later this year.

Britain has now ordered a total of 100 million doses of the Pfizer vaccine, one of three COVID-19 shots being rolled out in the country.

Hancock said the shots had been secured to support a COVID-19 booster vaccination programme starting in the autumn, adding that the biggest risk to Britain’s rollout so far was a new variant of the coronavirus.

“We’re working on our plans for booster shots,” Hancock said.

“These further 60 million doses will be used, alongside others, as part of our booster programme from later this year, so we can protect the progress that we’ve all made.”

Earlier on Wednesday, Public Health England said the details of any booster programme were still being worked out, and it would be designed primarily with new variants in mind.

England’s Deputy Chief Medic Jonathan Van-Tam said that by mid to late-summer, millions of people would have had two shots of either the AstraZeneca or Pfizer vaccines, and the question then would be whether to give a different vaccine as a booster.

A study starting in June should provide answers, he said.

“We’ll get an idea then of which gives you the highest boost, which perhaps gives you the broadest boost against a range of coronavirus variants, and indeed what the timings look like,” he told a press conference.

“That is another reason why the vaccines taskforce has invested in contracts with not just one or two manufacturers, but six or seven so that we have that optionality.”

Britain has administered 47.5 million vaccine doses so far, nearly 34 million of which are first shots.

While the country is second only to Israel in terms of the proportion of the population who have received a first dose, which stands at around 50%, it has suffered 127,000 deaths from COVID-19, the fifth-highest total globally.

Britain, which has a population of 67 million, has deals for 517 million doses of eight different COVID-19 vaccines, some of which remain under development.