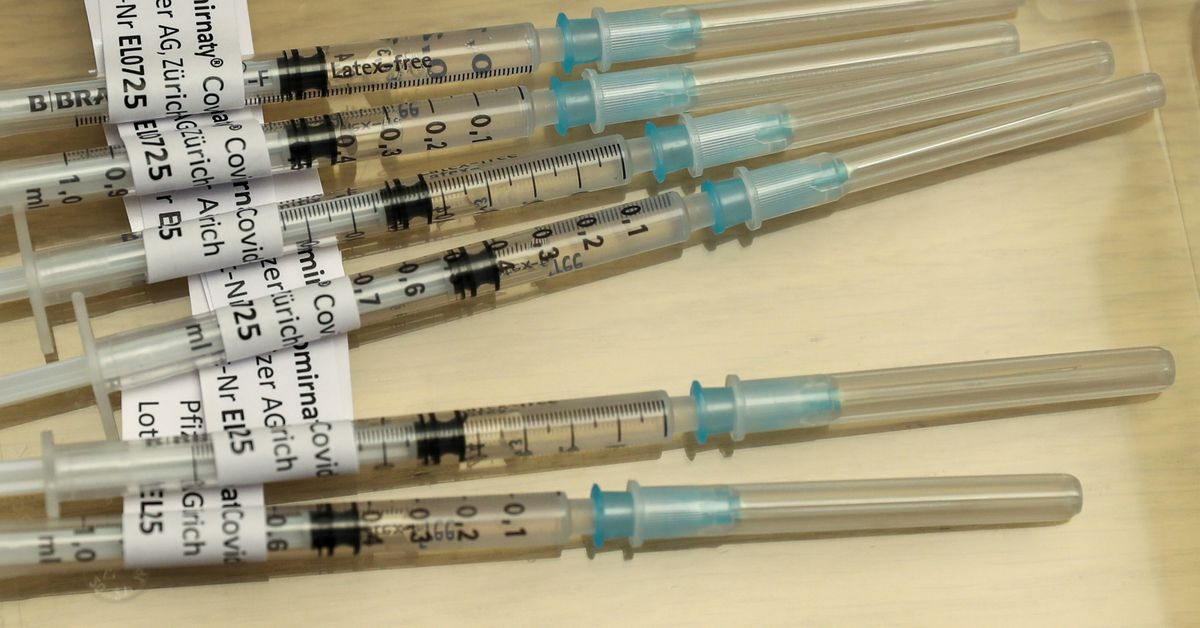 Syringes containing Pfizer-BioNTech COVID-19 vaccine are seen at the Impfzentrum Basel Stadt vaccination center at the Congress Center of the Messe Basel fairground, as the spread of the coronavirus disease (COVID-19) continues, in Basel, Switzerland March 18, 2021. REUTERS/Arnd Wiegmann

Russian and Chinese media are systematically seeking to sow mistrust in Western COVID-19 vaccines in their latest disinformation campaigns aimed at dividing the West, a European report said on Wednesday.

The Kremlin and Beijing deny all disinformation allegations by the EU, which produces regular reports and seeks to work with Google (GOOGL.O), Facebook (FB.O), Twitter (TWTR.N) and Microsoft (MSFT.O) to limit the spread of fake news.

Russian and Chinese vaccine diplomacy “follows a zero-sum game logic and is combined with disinformation and manipulation efforts to undermine trust in Western-made vaccines,” said the EU study released by the bloc’s disinformation unit, part of its EEAS foreign policy arm.

The EU and NATO regularly accuse Russia of covert action, including disinformation, to try to destabilise the West by exploiting divisions in society.

“Both Chinese official channels and pro-Kremlin media have amplified content on alleged side-effects of the Western vaccines, misrepresenting and sensationalising international media reports and associating deaths to the Pfizer/BioNTech vaccine in Norway, Spain and elsewhere,” the report said.

Russia denies any such tactics and President Vladimir Putin has accused foreign foes of targeting Russia by spreading fake news about coronavirus.

Last year, China sought to block an EU report alleging that Beijing was spreading disinformation about the coronavirus outbreak, according to a Reuters investigation.

While the EU has not vaccinated its 450 million citizens as fast as Britain, which is no longer a member of the bloc, shots are now gaining speed, led by U.S. drugmaker Pfizer’s (PFE.N) shots and its German partner BioNTech .

Russian media reported that “Brexit saved the UK from the ‘vaccine chaos’ engulfing the EU,” the EU said. “Such narratives indicate an effort to sow division within the EU,” it added.

Sputnik V responded that the disinformation campaign is against Russia and its vaccine, not the other way around.

“We will continue to fight disinformation campaign against Sputnik V in the interests of protecting lives around the world and avoiding vaccine monopoly that some vaccine producers may strive for,” it said on Twitter.

The Twitter account is managed by the Russian sovereign wealth fund, the Russian Direct Investment Fund, which is responsible for marketing and promoting the Sputnik V vaccine.

China meanwhile promoted its vaccines as a “global public good” and “presenting them as more suitable for developing countries and also the Western Balkans,” the report found. Western Balkan countries are seen as future EU members.