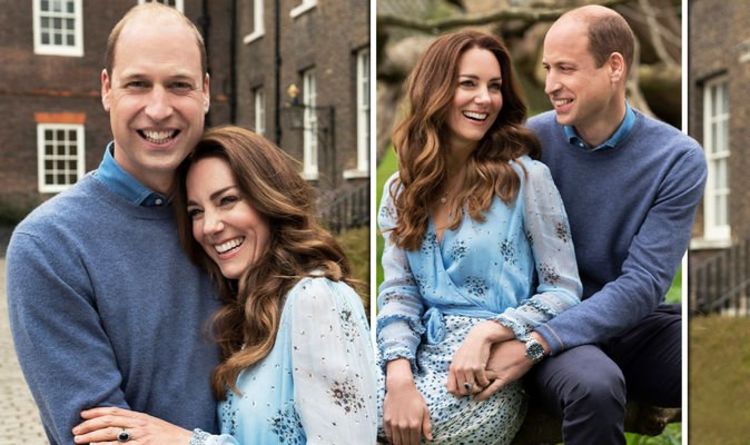 Released on the eve of their wedding anniversary, Kate and William revealed two new pictures which show the adorable pair gazing into each other’s eyes. Both adorned in regal blue, Kate can been seen beaming towards William as they remember the special day in Westminster Abbey in 2011. Despite the nation mourning the loss of Prince Philip two weeks ago, the two pictures will come to be a touching boost to the UK, and presumably Her Majesty.

While Duchess is seen beaming in both pictures, also front and centre of the adorable images is Kate’s dazzling sapphire engagement ring.

The ring once belonged to William’s mother Princess Diana and was gifted to Kate by the Duke at the base of Mt Kenya.

Showing off the dazzling 12-carat sapphire ring, Kate and William will mark not just 10 years of marriage but a union of close to 18 years after meeting at St Andrews University.

Since their marriage in 2011, Kate and William have since had three children; Prince George, Princess Charlotte and Prince Louis.

As the two pictures show the Cambridges beaming towards each other, Kate and William were in a comical mood as they visited Durham earlier this week.

The pair visited Manor Farm in the North-East where they were taken on a tour of the cattle, calves and the lambing sheds.

During the visit, they also discussed sustainable farming, climate change and later, mental health, at the Cheesy Waffles Project.

The project supports children and young people and was one of the initiatives to receive support from the Key charity.

JUST IN: Brexit LIVE: Rishi Sunak gearing up for bonfire of EU rules

“He would have been so pleased that you got your awards.”

Ahead of their 10th wedding anniversary, a survey of 5,055 adults by YouGov showed 43 percent “definitely” believe Kate will make a good Queen when the time comes.

A further 33 percent said she “probably” will while only a combined five percent believed she would not be a good Queen – 19 percent were unsure.

While Kate has been labelled as a good Queen when the time comes, the Cambridges have also been praised for their role during the pandemic.

Like the Queen, both Kate and William have offered a guiding light for the public, whether that be via videolink or in-person when conditions allow.

In January, the pair spoke to a host of frontline workers who shared their experiences throughout the pandemic.