Blue and White party leader Benny Gantz has engaged in negotiations with Prime Minister Benjamin Netanyahu to form a government, going against his pledge not to again form a coalition with the premier, according to a Thursday report.

The Walla news site, citing sources with knowledge of the negotiations, said Gantz proposed an equal share of power like in the current government — with Blue and White’s eight lawmakers having the same influence as the Netanyahu-led bloc’s 52 — but with Gantz going first as prime minister. Netanyahu rejected the offer, according to the report.

The report said that earlier, Netanyahu proposed a government in which Gantz is premier first but without the current mechanism that ensures neither the Netanyahu-led nor the Gantz-led bloc can approve major decisions without the other’s consent.

The sources said Netanyahu tried to find another form of compensation for Blue and White’s small size and influence, but no agreements were reached and the talks didn’t move forward.

Blue and White sources called the report an “outright lie” and insisted that there were “no negotiations with Likud.” They said that Netanyahu has indeed made offers, “but Benny didn’t ask him for anything and didn’t present any conditions.”

The current coalition features a rotation agreement, with Netanyahu serving in the role first and Gantz slated to go second. However, Netanyahu refused to pass a state budget — the only way to call elections without Gantz immediately becoming transitional prime minister — thus undermining the rotation deal.

On Wednesday evening, Gantz spoke to both Channel 12 news and the Kan public broadcaster and told them that Netanyahu has made offers, but he turned them down.

However, he refused to reject the power-sharing option outright — despite having long acknowledged that he was duped by the prime minister and insisting that the Likud leader could not be trusted — merely saying that “this option isn’t relevant at the moment” and it “isn’t feasible.” 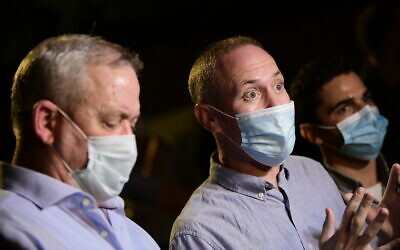 Culture and Sports Minister Chili Tropper, right, with Defense Minister Benny Gantz as they speak to the media outside Gantz’s home, during a protest of workers from the culture and art industry in Rosh Ha’ayin, August 9, 2020. (Tomer Neuberg/Flash90)

“As far as I am concerned, he has ended his role as prime minister,” Gantz told Channel 12.

“In the end, one cannot trust Netanyahu anymore,” he told Kan.

But elsewhere in Blue and White, there was dissatisfaction with Gantz’s answer.

“We won’t sit with Netanyahu, it’s not on the table,” Culture Minister Chili Tropper told Army Radio. “There are no negotiations going on. This is one side making offers and us answering ‘no.’”

Raoul Wootliff and Jacob Magid contributed to this report.

Sorgente articolo:
Gantz said to hold coalition talks with Netanyahu despite vowing to replace him – The Times of Israel