The Israel Defense Forces is bracing for possible unrest following the expected delay of the Palestinian elections on Thursday, which would likely be blamed on Israel, Channel 12 reported Wednesday.

Palestinian Authority President Mahmoud Abbas is expected to declare that he is postponing the legislative vote — the first in 15 years, scheduled for next month — over the question of voting rights for Palestinians living in East Jerusalem, which Israel considers part of its unified capital.

The Israeli army’s Southern Command is already preparing for border disturbances with the Gaza Strip and is closely watching developments among the Palestinians, the television report said.

Hamas, the Islamist terror group that is the de facto ruler of Gaza, said in a statement Wednesday that it would hold Israel responsible if the vote is pushed off.

“Jerusalem is a red line,” Hamas said, according to Hebrew media reports of the statement, adding that Palestinians cannot hold elections without the participation of East Jerusalem residents. The terror group said that not holding the legislative election on May 22 would be a denial of the rights of the Palestinians. 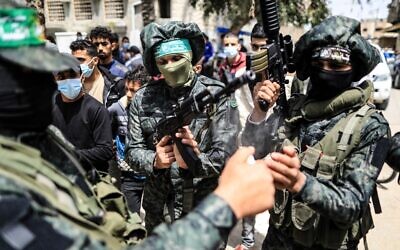 Fighters with the Izz-Al Din Al-Qassam Brigades, the armed wing of the Hamas movement, in Nuseirat refugee camp in the central Gaza Strip, on April 18, 2021. (MAHMUD HAMS / AFP)

Tensions between Israel and Gaza are already taut after recent rocket fire from the enclave at southern Israel and Israeli retaliatory airstrikes.

Abbas is expected to announce the delay during a speech on Thursday and has already told Palestinian security services to be on standby amid concerns of protests or rioting in the West Bank, Channel 12 reported.

The anticipated delay already caused some minor disturbances in the West Bank city of Ramallah and in East Jerusalem, the station said.

In an attempt to tamp down anger from Hamas over a postponed election, Abbas sent two of his most senior advisers to Qatar and Egypt with a request that the countries put pressure on the terror group to reduce tensions, according to the report.

Hamas, which is expected to make gains in the election, is keen to see it go ahead. The last Palestinian national elections were held in 2006, when Hamas defeated Abbas’s Fatah movement in a landslide.

The 2006 elections led to an unstable unity government boycotted by the international community. In 2007, civil war broke out between the two sides. After a bloody struggle that left hundreds dead, Hamas expelled Fatah from Gaza to the West Bank.

When the widely unpopular Abbas issued a formal decree ordering the elections in mid-January, many observers dismissed it as a stunt to shore up his fading legitimacy. Nonetheless, the election advanced for months, with anticipation and optimism slowly building — until last week, when it emerged that Abbas would likely postpone the vote.

According to the decree, Palestinians are scheduled to head to legislative elections next month and then to presidential elections on July 31.

At a Monday meeting of the Fatah Central Committee, Abbas reiterated that he would not permit the elections to take place without the residents of East Jerusalem being permitted to vote.

A request by the Palestinians, sent to Israel, asked that 6,300 East Jerusalem residents be permitted to vote in the election at local post offices. Israel has not responded to the demand, reports said, creating an opportunity for Abbas and his Fatah party to avoid the election in which they are predicted to suffer a heavy defeat. 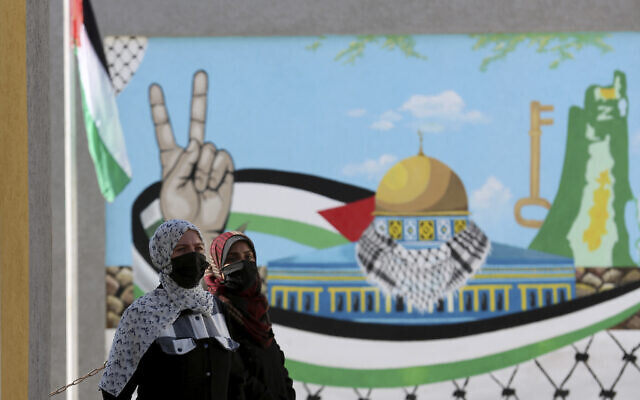 Women wear face mask as they waiting at the registration station of the Central Elections Commission to register their names to the electoral roll, at Gaza City, February 10, 2021. (Adel Hana/AP)

On Tuesday Israel’s Foreign Ministry’s political director Alon Bar met with 13 ambassadors from European Union countries and urged them not to heed claims of Israeli interference in the election made by officials close to Abbas.

“During the meeting, Alon Bar emphasized to the ambassadors that the elections in the Palestinian Authority are an internal Palestinian issue, and that Israel has no intention of intervening in them nor preventing them,” a Foreign Ministry statement said.

The Palestinian leadership — including leaders of Hamas and Islamic Jihad — is scheduled to meet on Thursday to decide whether the elections can go forward without Israel officially permitting East Jerusalem Palestinians to participate.

Abbas’s opponents have charged in recent days that the unpopular PA president, fearful of political defeat, is using Israel’s alleged refusal to formally permit East Jerusalem voting as a pretext to back away from holding the election. The vote, originally scheduled for 2010, sees his once-dominant Fatah movement under challenge from breakaway factions as well as Hamas.

The Oslo Accords, a series of bilateral agreements between Israel and the Palestine Liberation Organization, stipulate that Palestinians can vote at designated post offices throughout Jerusalem.

The Palestinian election commission says 150,000 voters will be able to cast ballots on the outskirts of East Jerusalem, in a process that does not require a green light from Israel. The addition 6,300 requested were to be symbolic ballots from within the city itself under Israeli supervision.