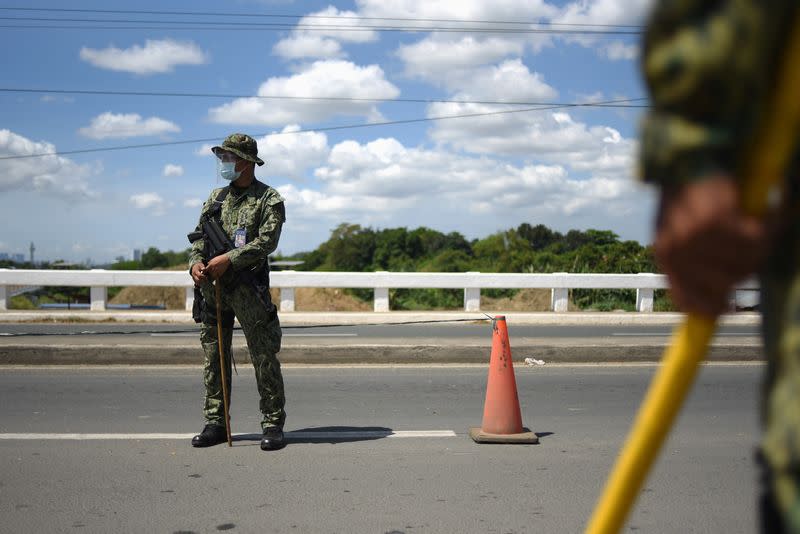 MANILA (Reuters) – President Rodrigo Duterte is extending restrictions on movement and gatherings in the Philippines’ capital region and four nearby provinces for another two weeks to curb a sharp rise in COVID-19 cases and bolster its medical capacity.

The country is battling one of the worst coronavirus outbreaks in Asia, with hospitals and medical workers in the capital Manila overwhelmed, while authorities face delays in the delivery of vaccines.

“I am sorry I have to impose a longer modified enhanced community quarantine. It is necessary,” Duterte said in a late night televised address.

Non-essential movement, mass gatherings and dining in restaurants will remain banned in Metro Manila and in the provinces of Bulacan, Rizal, Laguna and Cavite for a further two weeks from May 1.

Restrictions to curb the spread of the disease have taken a painful toll on the Southeast Asian economy, which suffered its worst contraction on record due to the pandemic last year.

The Department of Health recorded 6,895 new COVID-19 cases and 115 more deaths on Wednesday, bringing the tallies to 1.02 million confirmed infections and more than 17,000 fatalities.

While the government aims to inoculate 50 to 70 million out of the country’s more than 108 million people, the pace of its inoculation campaign has been slow due to difficulties in securing supply.

But Carlito Galvez, who is in charge of the government’s vaccine procurement programme, said that will change in the second half when the bulk of the supply the country procured will have arrived, making 500,000 daily inoculations possible.

Galvez also said the Philippines has told Israel of its wish to get AstraZeneca shots which it no longer needs.

Around 1.56 million people have so far received at least one coronavirus vaccine shot. Only 3 million doses have been delivered, out of 140 million the Philippines aims to procure.