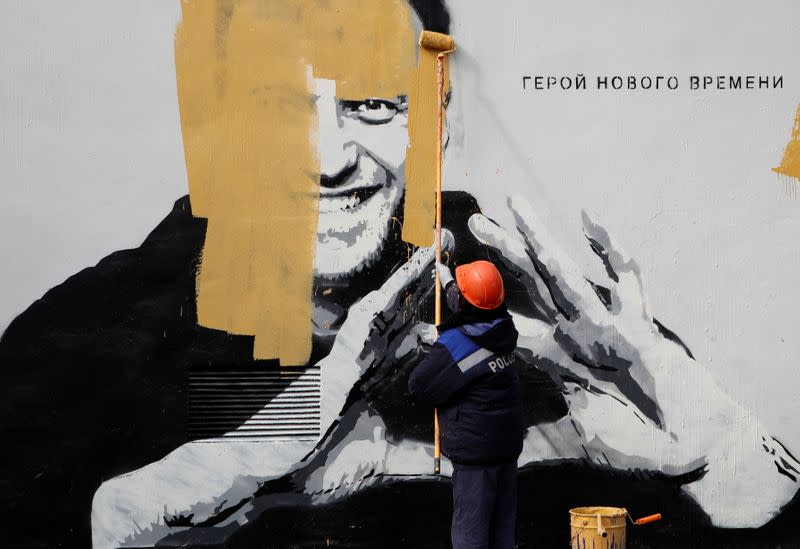 MOSCOW (Reuters) – Russian authorities rapidly painted over a large mural of jailed opposition politician Alexei Navalny on Wednesday after it appeared overnight on a building in central St Petersburg.

The mural in President Vladimir Putin’s hometown showed a smiling Navalny, whose activist network is on the brink of being outlawed as “extremist”, making a heart shape with his hands next to the slogan “A hero of a new time”.

Police arrived at the scene at 9am local time and workers arrived to start painting over it with yellow paint within around 90 minutes. It was unclear who painted the mural.

Navalny, Putin’s most outspoken domestic opponent, is serving a 2-1/2 year jail sentence for parole violations on an earlier conviction that he says was politically motivated.

A court is considering a request by Moscow’s prosecutor to ban Navalny’s Anti-Corruption Foundation (FBK) and his regional offices on the grounds they are extremist. The next hearing in that case is expected on Thursday.

Lyubov Sobol, a Navalny ally, mocked authorities for painting over the mural.

“That’s how they transform everything ‘alive’ and beautiful into the impersonal and ‘dead’. For us, Russia is for happiness, for them, it is for gloom and stagnation,” she wrote on Twitter.