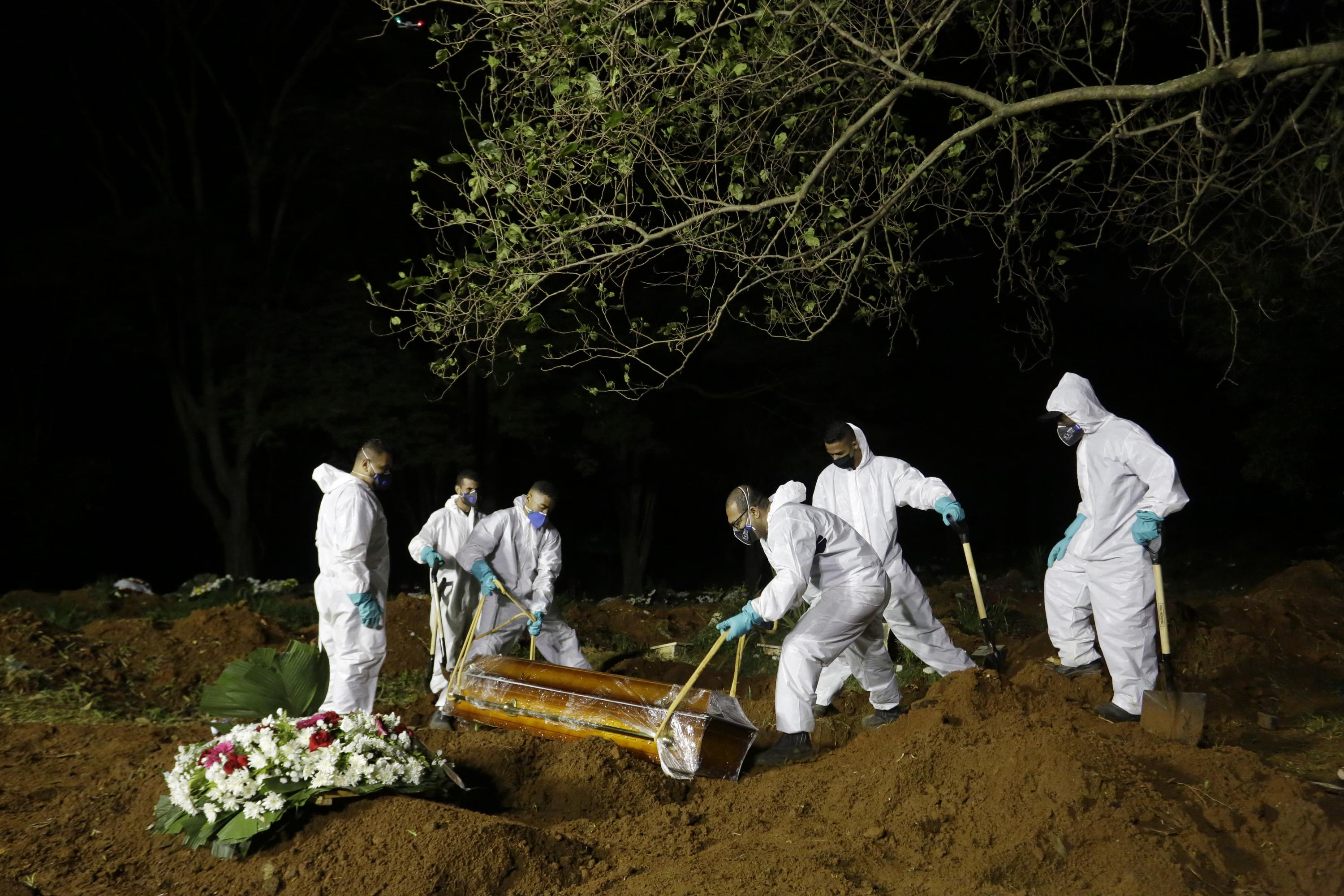 RIO DE JANEIRO (AP) — For most of this month, intensive care units across Brazil were at or near capacity amid a crush of COVID-19 patients, and sedatives needed to intubate patients dwindled. The nation’s biggest cemetery had so many corpses to bury that gravediggers worked hours past sundown.

But Brazil has stepped back from the edge — at least for now — as burial and hospital services no longer face collapse. It has ceased to be the virus’ global epicenter, as its death toll ebbed and was overtaken by India’s surge. Experts warn, however, that the situation remains precarious, and caution is warranted.

The number of states with ICU capacity above 90% has slipped to 10, from 17 a month ago, according to data from the state-run Fiocruz medical research institute. And nighttime burials at Vila Formosa and three other cemeteries in Sao Paulo were suspended Thursday, after two weeks of declining deaths.

That comes as cold comfort in a country where some 2,400 people died every day over the past week, more than triple the number in the U.S. Brazil surpassed the grim milestone of 400,000 confirmed deaths on Thursday — a number considered by experts to be a significant undercount, in part because many cases were overlooked, especially early in the pandemic. The seven-day average has retreated from more than 3,100 deaths in mid-April, but Fiocruz warned in a bulletin Wednesday that it may plateau —and at an even higher level than it did last year.

“Our goal now is to make the numbers keep going down instead of stabilizing. That’s the most crucial thing,” said Pedro Hallal, an epidemiologist and coordinator of Brazil’s largest COVID-19 testing program. “It’s good that they’re going down, but let’s not assume that this will be the last wave. There is hope that it will be the last wave, because of the vaccine, but that needs to be confirmed.”

Given the slow vaccine rollout, there are millions more Brazilians vulnerable to infection, Hallal added, and the threshold scientists believe is needed to stop uncontrolled spread — 70% or higher of the population with immunity through vaccination or past infection — remains distant.

Brazil’s death toll of 401,186 is the world’s second-highest, with the majority recorded in just the last four months as a more contagious variant swept the nation. In the thick of the Southern Hemisphere’s summer, crowds gathered and people boarded public transport in droves as mayors and governors relaxed the restrictions on activity that Brazil’s President Jair Bolsonaro fervently opposes.

Some mayors and governors tightened such measures over the last month, helping to revert the surge of infections, Fiocruz said. However, they have begun reopening again amid the early, encouraging data.

“Often the pandemic gets worse because a lot of people who have the opportunity to stay home don’t. They go out instead,” he said. “If everyone contributed, I don’t think there would be such a big crisis of having to stop work, having these lockdowns.”

But the rate remains high, said Domingos Alves, an epidemiologist tracking COVID-19 data, and he argues it’s too soon to roll back restrictions. Brazil risks repeating the errors of European countries that have seen third surges, because the country’s decline in infections isn’t yet sustained, he said.

“The situation in all Brazilian states requires adoption of more drastic measures to contain the virus,” said Alves, an adjunct professor of social medicine at the University of Sao Paulo. “The number of cases is very high and we aren’t doing anything to contain the virus.”

Brazil’s number of confirmed cases is widely believed to be an undercount, and the virus is also gaining ground among its neighbors. The ICUs in Argentina’s capital, Buenos Aires, have been pushed to critical levels. Peru, Venezuela, Uruguay and Colombia have seen cases jump in recent weeks. Health experts have cited the circulation of variants, including a strain believed to have originated in Brazil’s Amazon, as a contributing factor.

“It’s no surprise that many countries in our region have tightened public health measures by extending curfews, limiting re-openings and imposing new stay-at-home orders,” said Carissa Etienne, director of the Pan American Health Organization. “These decisions are never easy, but based on how infections are surging, this is exactly what needs to happen.”

Such recommendations remain anathema to Bolsonaro; last weekend he called lockdown measures “absurd” and suggested he could order the army into the streets to restore order.

The president has consistently downplayed the disease and dispensed false hope by touting unproven drugs, which critics say only added to the nation’s death toll. This week the Senate began an investigation into the government’s alleged failures in managing the pandemic.

The troubled response has been reflected in health minister turnover; the fourth man to occupy the post during the pandemic, Dr. Marcelo Queiroga, took over last month. He has spoken of the need to boost vaccine supply, personally consults with scientists and has so far displayed the autonomy to promote mask use and social distancing. That marks a shift from his predecessor, an active-duty general who made explicit his deference to Bolsonaro’s wishes on health policy.

Queiroga told reporters this week that the decrease in hospitalizations has eased demand for oxygen and sedatives for intubation. Stopgap donations from big businesses and the governments of Canada and Spain also shored up supply. The Health Ministry is also preparing a tender for the acquisition of more sedatives.

The minister has stopped short of embracing public health experts’ calls for lockdowns and restrictions on activity, and hasn’t ruled out use of drugs that rigorous testing has shown to be ineffective. But he is showing recognition that Brazil isn’t yet free and clear.

“We are still in a very serious moment of the pandemic,” Queiroga said. “Deaths are falling, but there are still a very high number.” ___ AP videojournalist Tatiana Pollastri contributed from Sao Paulo

Sorgente articolo:
Brazil backs away from the virus brink, but remains at risk – Associated Press