MOUNT MERON — The line of buses stretched back for well over a kilometer from the Tomb of Rabbi Shimon Bar Yochai on Friday morning, crawling at a snail’s pace toward the pilgrimage site, in order to remove the unorganized masses of people — men and women, young and old — waiting to leave, following the deadly stampede the night before.

The mass exodus, hours after the deadly disaster, was rife with confusion and frustration, as the police attempted to herd the thousands of people still on the mountain toward buses to take them to major ultra-Orthodox centers: Jerusalem, Beit Shemesh, Bnei Brak, Tiberias and Safed, or to nearby bus and train stations. To assist in this effort, Israel Railways sent 13 additional trains, each capable of carrying hundreds of people, to the nearest station, Carmiel.

What would have anyway been a difficult logistical operation due to the single-lane, winding roadways surrounding Mount Meron was made even more difficult by a near-total lack of coordination, planning and management by authorities at the site, according to both pilgrims and police officers at the scene.

“We have no direction. There’s someone down the hill who’s supposed to be in charge, but I don’t know. We’re trying to keep people back to let the buses through, but…” one officer told The Times of Israel, trailing off with a shrug.

Without clear signs to direct crowds to the appropriate bus, people would instead stop drivers on the road to ask their destination, despite cries from police to stop, further slowing down the operation.

“If you don’t get back on the sidewalk, you’ll all be staying here for Shabbat,” one officer yelled at the crowd, referring to the fact that religious Jews do not drive in cars or otherwise use electricity or fire on the Sabbath. 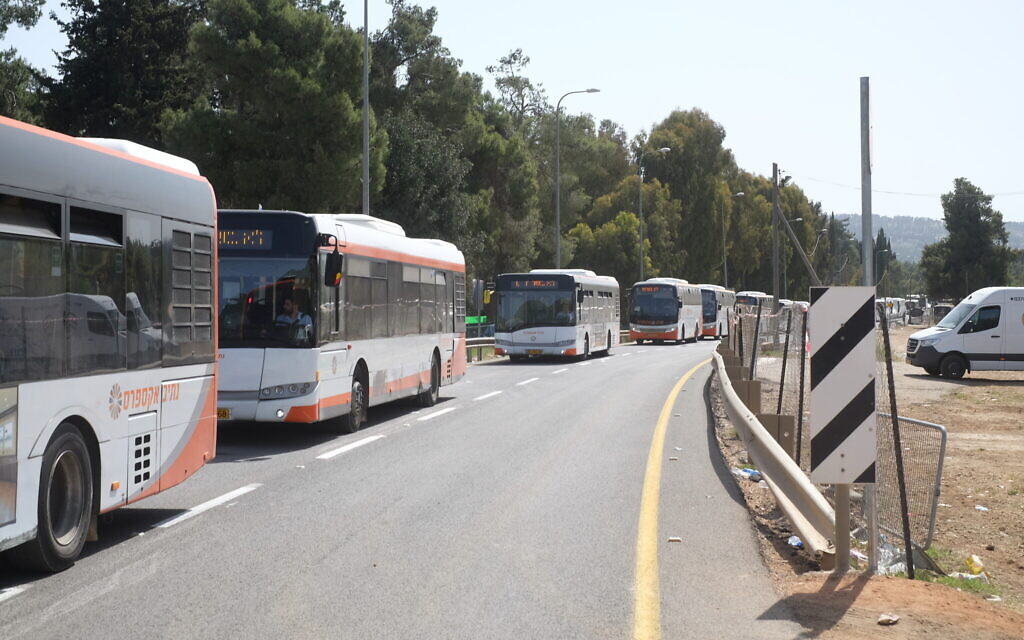 A line of buses stretches for more than a kilometer leading to Mount Meron to remove thousands of people stuck at the site following a deadly stampede on April 30, 2021. (Judah Ari Gross/Times of Israel)

The lingering tensions between the pilgrims and the police over the disaster was palpable during this effort, with people occasionally yelling at officers that they should be ashamed of themselves for what happened. This appeared to be based on a widely heard rumor that police officers had initially blocked the exit from the area where the stampede occurred, aggravating the situation. The police denied this description, saying all the pathways in question were open.

The haphazard and poorly executed exit from Mount Meron following the deadly stampede in which at least 44 people, some of them children, were crushed to death and more than 150 were injured, demonstrated the acute logistical nightmare that is the annual mass gathering at Bar Yochai’s tomb on the Lag B’Omer holiday.

Each year, save for last year because of the coronavirus pandemic, hundreds of thousands of people come to Meron, an otherwise tiny town that sorely lacks the infrastructure needed for such throngs of people. Though this was originally a tradition mostly associated with Hassidic sects of Judaism, the pilgrimage to Meron has grown to be a far wider tradition, attracting all varieties of religious and spiritual Jews.

In some years, half a million people have taken part in the festivities on Mount Meron, which include music, bonfires and haircuts for small children. People who attend the event regularly describe it as nothing short of a miracle that such stampedes haven’t happened before, given the masses of people crammed into exceedingly small spaces, with similarly insufficient entrances and exits. 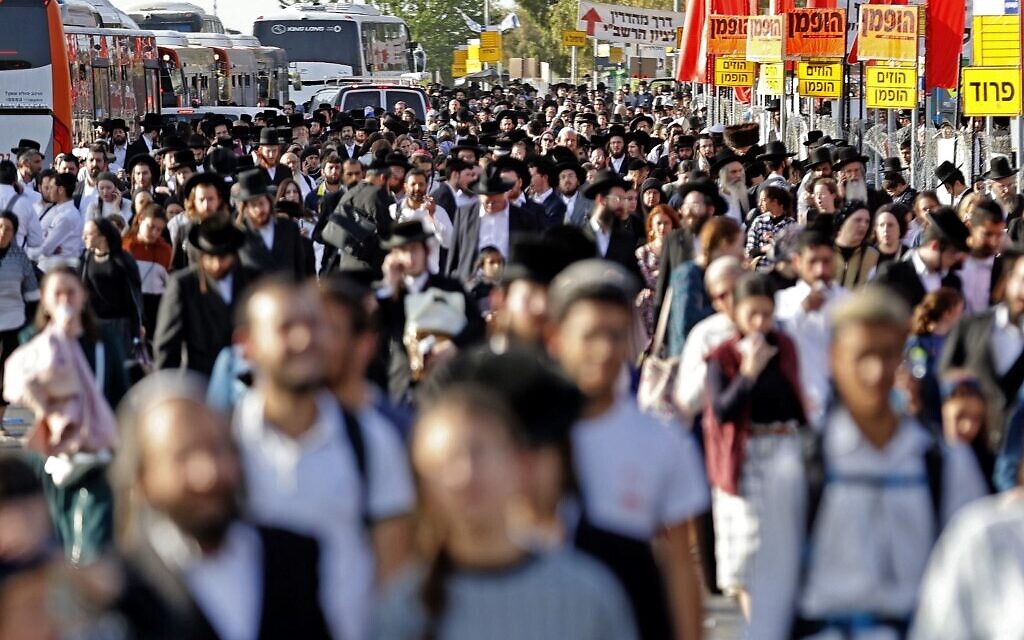 A photo taken on April 30, 2021 shows a crowded street in the northern Israeli town of Meron near the scene of an overnight stampede that took place during a religious gathering near the tomb of Rabbi Shimon Bar Yochai, a second-century Talmudic sage, where mainly ultra-Orthodox Jews flock to mark the Lag B’Omer holiday. (Jack Guez / AFP)

This year, roughly 100,000 people took part in the events on Mount Meron, far fewer than police originally expected. It appears that the somewhat lower numbers of participants was due to lingering concerns over the coronavirus and out of concerns that it would be difficult to return home in time for Shabbat from Meron, which is located in northern Israel, near the city of Safed.

Following the deadly stampede, which appears to have been sparked by a group of people who fell in a narrow walkway, though the exact cause is still being investigated, the police closed off the area and ordered all those inside to leave — something easier said than done — as the hundreds of medics already at the scene treated and evacuated the injured and police officers began collecting testimonies and evidence.

As the tens of thousands of visitors made their way off Mount Meron, they left in their wake mounds of garbage — food wrappers, bottles, cans, plastic bags — as there were no trash bins to be found along the road where the crowds were waiting for buses or making their way out on foot. After people initially complained that they lacked water, a grassroots effort was undertaken to distribute water bottles to prevent mass dehydration as the morning grew hot. 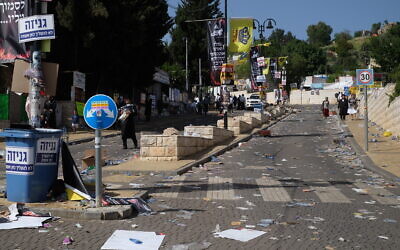 Trash left in the streets around Mount Meron following a deadly stampede on April 30, 2021. (Judah Ari Gross/Times of Israel)

The roads surrounding Mount Meron were dotted with groups of ultra-Orthodox, or Haredi, men, women and children, carrying suitcases, sleeping bags, tents and plastic bags of food as they walked toward buses and population centers, some of them stopping passing cars in an attempt to hitchhike home.

In order to keep additional people away from the area, the police set up dozens of checkpoints throughout the region, adding to the traffic jams around Mount Meron and Safed.

The more than 150 people who were wounded in the stampede were evacuated to nearby hospitals in northern Israel, mostly to Safed’s Ziv Medical Center, but others to Haifa’s Rambam Medical Center, Poriah Medical Center in Tiberias and one patient who required neurosurgery was taken to Jerusalem’s Hadassah Hospital, to receive treatment unavailable in closer hospitals.

Sorgente articolo:
Mass confusion as tens of thousands try to leave Mt. Meron after deadly stampede – The Times of Israel