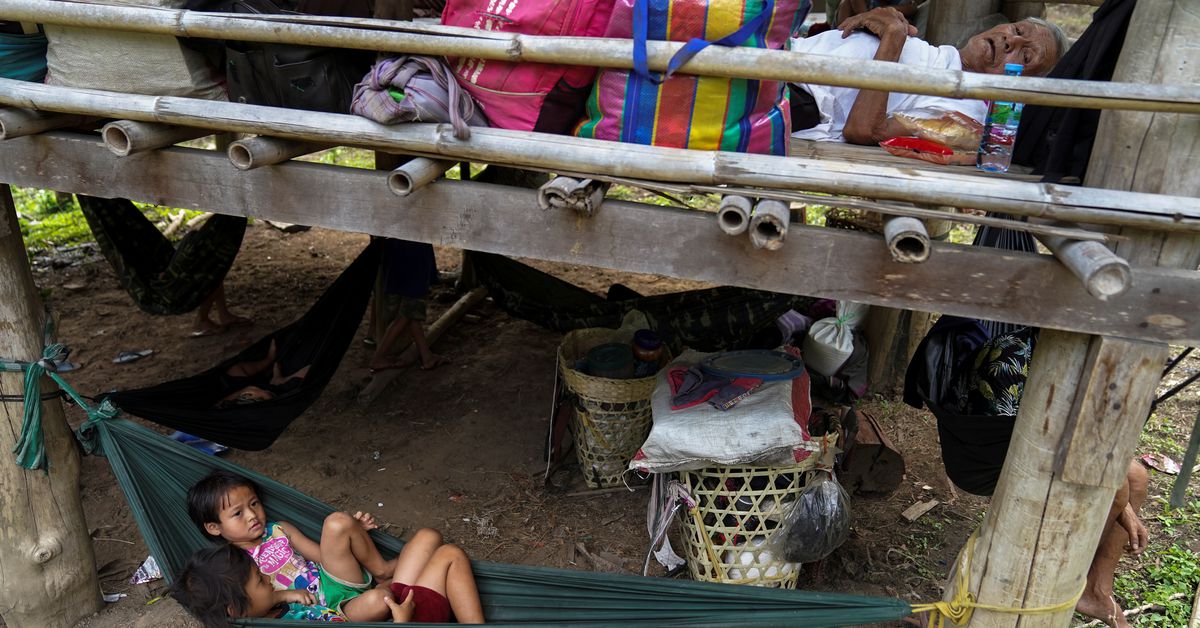 Thousands of ethnic Karen villagers in Myanmar are poised to cross into Thailand if, as expected, fighting intensifies between the Myanmar army and Karen insurgents, joining those who have already escaped the turmoil that followed a Feb. 1 coup.

The U.N. humanitarian office said on Friday that in all about 56,000 people have been displaced by conflict in Myanmar this year while another U.N. agency warned that the coronavirus and the political crisis could push nearly half the population into poverty.

Karen rebels and the Myanmar army have clashed near the Thai border in the most intense fighting in the area in 25 years, in the wake of a military coup that ousted an elected government led by Aung San Suu Kyi.

Villagers on both sides of the border have been forced from their homes.

“People say the Burmese will come and shoot us, so we fled here,” Chu Wah, a Karen villager who crossed over to Thailand with his family this week from the Ee Thu Hta displacement camp in Myanmar, told Reuters.

“I had to flee across the river,” Chu Wah said, referring to the Salween river that forms the border in the area.

The Karen Peace Support Network says thousands of villagers are taking shelter on the Myanmar side of the Salween and they will flee to Thailand if the fighting escalates.

“In coming days, more than 8,000 Karen along the Salween river will have to flee to Thailand. We hope that the Thai army will help them escape the war,” the group said in a Facebook post.

Karen fighters on Tuesday overran a Myanmar army unit on the west bank of the Salween in a pre-dawn attack. The Karen said 13 soldiers and three of their fighters were killed. The Myanmar military responded with air strikes in several areas near the Thai border.

Thailand’s foreign ministry spokesman said 2,267 civilians had crossed into Thailand as of Friday since the latest conflict began. Many more have taken refuge in forest on the Myanmar side.

The inhabitants of two Thai villages close to the border have also fled from their homes, the Thai ministry spokesman, Tanee Sangrat, told a briefing, with 220 people still seeking refuge deeper in Thai territory for safety.

“The situation has escalated so we can’t go back,” said Warong Tisakul, 33, a Thai villager from Mae Sam Laep, a settlement, now abandoned, opposite the Myanmar army post attacked this week.

Heavy clashes have also been taking place in the north of Myanmar between government forces and ethnic Kachin insurgents.

Media reported heavy casualties among government troops in recent days but a spokesman for the Kachin Independence Army insurgent group said he could not confirm any figures.

“There will be casualties on both sides,” the spokesman, Naw Bu, said by telephone.

The Karen, Kachin and several other insurgent groups have come out in support of the pro-democracy protesters who have been taking to the streets in towns and cities across the country to oppose the return of military rule.

The security forces have killed at least 759 protesters since the coup, the Assistance Association for Political Prisoners activist group says. Reuters is unable to confirm the casualty toll.

The military, which ruled for almost 50 years until launching a tentative reform process a decade ago, has acknowledged the death of some protesters, killed after they initiated violence, it says. Several members of the security forces have been killed in the protests, the military says.

The U.N. Development Programme (UNDP) warned that the impact of the pandemic and the political crisis could see as many as 25 million Myanmar people slide into poverty by 2022.

“The development gains made during a decade of democratic transition, however imperfect it may have been, is being erased in a matter of months,” U.N. Assistant Secretary-General and UNDP Regional Director Kanni Wignaraja told Reuters.