Police on Saturday were working to limit the number of pilgrims marking the Holy Fire ceremony at Christianity’s holiest site, a day after a deadly crush killed 45 people during Lag B’Omer festivities in northern Israel.

Heavy police presence and temporary barriers were seen by the entrance to the Church of the Holy Sepulchre in Jerusalem’s Old City on the eve of Orthodox Easter.

Overnight Thursday-Friday at least 45 ultra-Orthodox pilgrims were crushed to death and more than 150 people hurt, including many critically, in a stampede at a mass gathering to celebrate the Lag B’Omer holiday at Mount Meron.

In Jerusalem Saturday, police scuffled with pilgrims making their way to the church as they attempted to control the massive crowds.

There was no immediate statement from the police.

It was unclear how many participants were present at the Holy Fire ceremony this year. Previous years have seen over 10,000 pilgrims partake in receiving the flame, representing the resurrection of Jesus, which is passed from candle to candle and will be taken back to Orthodox churches worldwide.

Last year, during the onset of the coronavirus pandemic, special arrangements were made to allow the ceremony to take place in a highly limited fashion. Now, as the pandemic ebbs and Israel has largely reopened, the ritual was held with minimal restrictions.

The ceremony at the church — built on the site where according to Christian tradition Jesus was crucified, buried, and resurrected — is the holiest event for Orthodox Christianity. 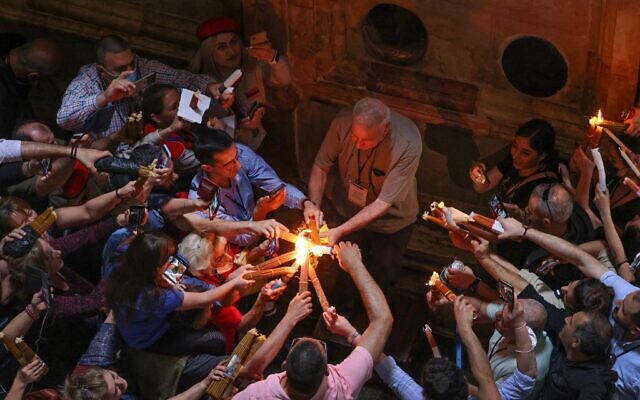 During the annual ceremony dating back at least 1,200 years, top Eastern Orthodox clerics enter the Edicule, the small chamber marking the traditional site of Jesus’s tomb.

They then emerge to reveal candles said to be miraculously lit with “holy fire” as a message to the faithful from heaven. The details of the flame’s source are a closely guarded secret.

The Church of the Holy Sepulchre and the rest of the Old City lies in East Jerusalem, captured by Israel from its Jordanian occupiers in the Six Day War of 1967 and later annexed by Israel.