PARIS (JTA) — Joining the stream of people converging on Trocadero Square, I soon realized that this event would be significantly different from the dozens of Jewish community gatherings I had attended in France.

The atmosphere, rhetoric, symbolism and attendance at the “Justice for Sarah Halimi” protest rally on April 25 suggested to me that France’s Jewish community is entering a new phase in the decades-long slip of its members’ confidence in their future here.

The rally — an event with 20,000 participants, one of the largest communal gatherings in decades — was sparked by an April 14 decision by France’s highest court. It affirmed that 31-year-old Kobili Traore was unfit to stand trial because Traore, a Muslim, had smoked so much marijuana before the 2017 slaying that it rendered him temporarily psychotic.

The killing of Halimi, a 65-year-old physician and kindergarten teacher, infuriated French Jews also because they widely see it as the latest in a series of ideologically motivated murders by Islamists, which have claimed the lives of at least 10 Jews over the past decade.

But unlike many previous protests by French Jews over this issue, the April 25 one was not primarily about antisemites at all. Instead, it was a cry against the actions of authorities that French Jews almost unanimously regard as cherished allies in the fight against jihadists and other haters of Jews.

This significant thematic twist is the least of what makes me think of April 25 as a milestone. 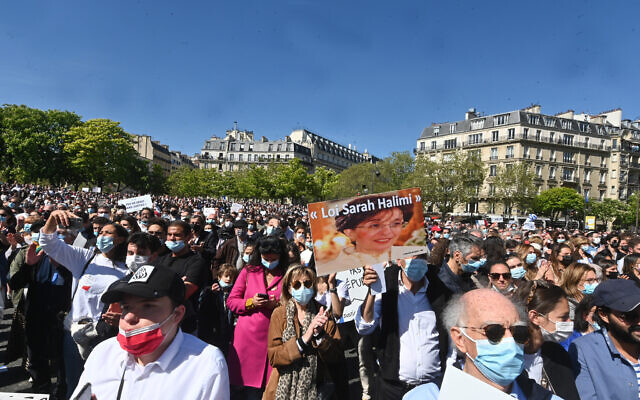 This community, which I thought I knew very well, was suddenly unrecognizable to me.

Gone was the familiar informality that usually accompanies such gatherings. Like funerals, they are solemn but social events for members of a tight-knit community where reunions are uplifting — especially after a year of lockdown.

The people I saw at Trocadero Square were neither merely sad nor angry. They were seething, exasperated. Perhaps desperate. And there was a new sentiment in the mix: resignation, which I had not experienced quite so palpably before during my 15 years of covering French Jewry.

It was evident not only in conversations I had with protestors — “Take a look at all the people here: We’ll all be in Israel by 2031,” one protester, an actor named Anthony Sonigo, told me — but also in the signs and speeches of the organizers. 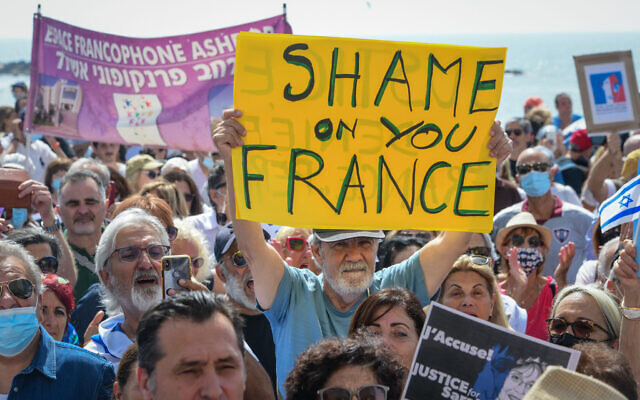 Members of the French community gather outside the French Embassy in Tel Aviv to ask justice for late Sarah Halimi who was murdered by her neighbor in her apartment in Paris, seen on April 25, 2021. (Avshalom Sassoni/Flash90)

It was the first time I had witnessed black humor on display at a setting that I’m used to seeing dominated by expressions of unity and uncompromising resolve to endure.

The videos shown on a giant screen at the rally were also unusual.

One was by Jacques Essebag, a French-Jewish comedian who is known by the stage name Arthur, announcing that he has “decided to start using drugs because in France you can do whatever you want, even kill your neighbor if you don’t like her, if you use drugs.” He then added: “What has become of this country?” 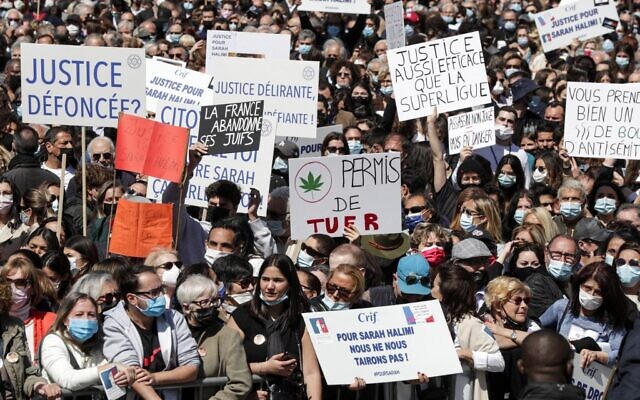 People hold placards reading ‘Stoned justice?’ (L), ‘License to kill’ (C) and ‘A justice as efficient as the Super League’ (R) as they gather to demand justice for Sarah Halimi, a slain French woman, on Trocadero plaza in Paris on April 25, 2021. (GEOFFROY VAN DER HASSELT / AFP)

Another featured four people engaged in maniacal laughter and mumbling “impossible, could never happen” to underline how many French Jews believe the rulings on Traore to be unreasonable. They point to Traore’s own statements as he killed Halimi, as well as his flight afterward, as evidence that he was not insane.

Another telltale sign was the dozens of yellow flags at the rally of the Jewish Defense League, a far-right organization that is considered a terrorist organization by the FBI. Its symbols are usually verboten at mainstream Jewish community events such as Sunday’s rally.

I also observed a real change in the way that allegiance to France — and the possibility of leaving it — was discussed. At least 50,000 French Jews have decided to leave France for Israel over the past decade. This immigration, called aliyah in Hebrew, peaked after 2012, when a jihadist murdered four Jews at a Jewish school in Toulouse. It surged after a jihadist in 2015 killed another four Jews at a Paris kosher supermarket.

In the wake of these tragedies and the uncertainty they spelled for French Jews, Chief Rabbi Haim Korsia has consistently sought to reassure them of their future here. In 2016, following the stabbing of a Jew in Marseille, he said in a speech that even questioning whether to wear a kippah on the street in France “is problematic. We must not cede an inch, and neither France nor its Jews will ever cede an inch,” he said. 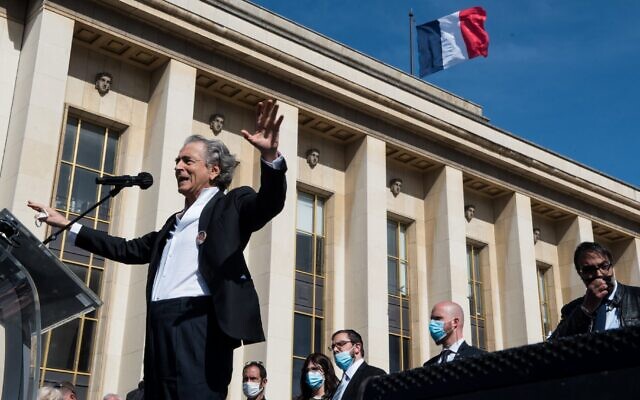 Korsia, whose optimism is his trademark, did not repeat this message at the April 25 rally, preferring to merely recite a mourner’s prayer for Halimi.

Jonathan Behar, a Paris-born high-tech entrepreneur and one of the initiators of the rally, attempted to inspire the crowd during his speech, shouting “we are here, we will prevail.” But, he boomed, “if police cannot defend us, if the judiciary cannot defend us, what is our future?” Dozens of protesters shouted back: “Aliyah,” triggering laughs.

Such fatalism is uncharacteristic of a community whose events usually feature plenty of pathos, including spontaneous expressions of patriotism such as singing the Marseillaise, the French national anthem. It was a jarring real-life expression of a recent development that happened online, in which community figures began for the first time to debate the minority’s future in op-eds and social media. 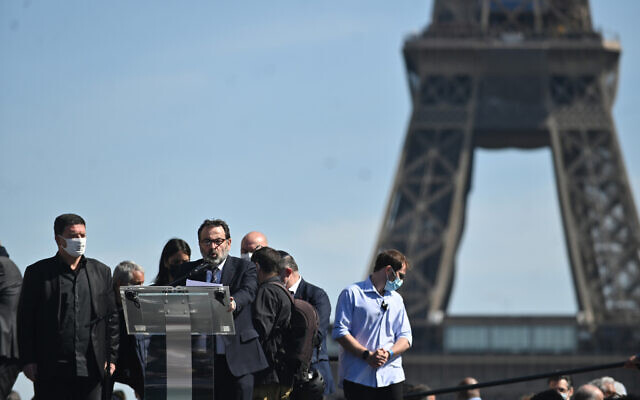 The speech by Joel Mergui, the president of the Consistoire, the organ of French Jewry responsible for Orthodox religious services, was likewise unprecedented.

“I understand your doubts and your questions about the future, and I share them,” he said. “I don’t even know whether to reassure you or cry out my fury. Yes, cry out your fury!”

The audience cried out in a manner I had not before seen — not at the commemorative events at Toulouse, or outside the Hyper Cacher kosher supermarket in 2015.

I asked protestors whether the Halimi affair has changed how they think of France.

“Not on its own,” one of them, Alice Levy, an 18-year-old student from the Paris region, told me.

“Each time, each attack, each failure caused a certain disillusion,” she said. “So here we are, still French, still Jewish, still committed and united enough to come here. But disillusioned.”

Sorgente articolo:
At Sarah Halimi rally in Paris, signs French Jewry is nearing a breaking point – The Times of Israel