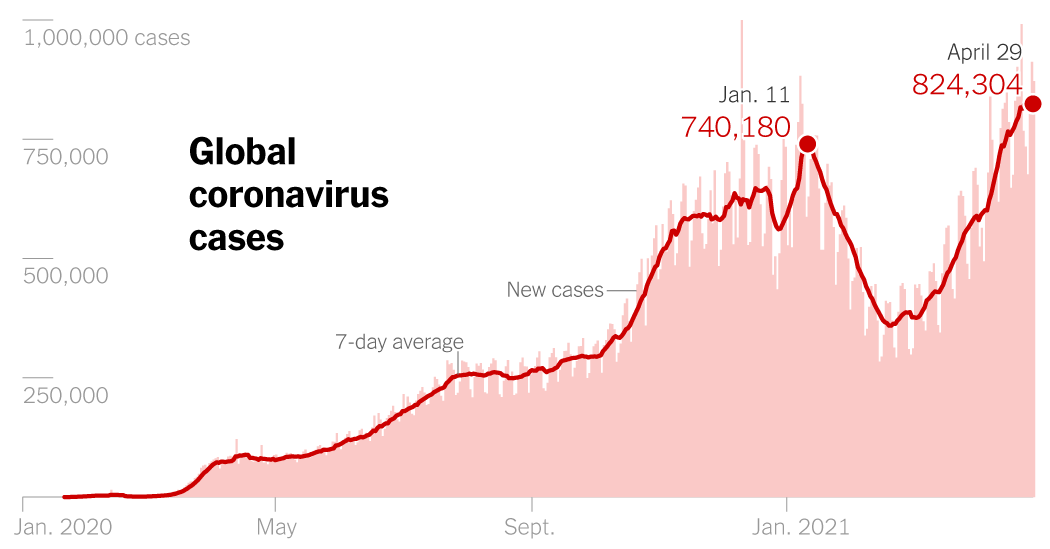 Worldwide, the number of new coronavirus cases has shot upward since the beginning of March, more than doubling in two months. For the past two weeks, new global cases have exceeded their previous high point in early January. The average daily rate of new cases has now been above 800,000 for more than a week.

The increase in cases is largely being driven by the uncontrolled outbreak in India, where new cases have risen sharply for the past month and show no signs of abating. A seven-day rolling average of new daily cases in the nation exceeded 357,000 on Thursday, a more than fivefold increase since April 1.

India now accounts for more than 40 percent of the world’s new cases. The country’s death rate has followed the same dramatic curve, with more than 3,000 people now dying every day. Analysts say even those grim numbers may be undercounted.

The second wave of the virus in India has been devastating. In hospitals in New Delhi, the capital, a shortage of medical oxygen has reached crisis levels, and cremation grounds are working around the clock as relatives and friends continue to bring more bodies to be burned.

After enacting one of the world’s strictest lockdowns last March, which kept deaths relatively low, Indian officials relaxed restrictions. Some politicians even held crowded rallies in recent weeks as the country’s infection rate picked up. The surge has left hospitals overwhelmed.

“People are angry because they are not getting ventilators and oxygen,” said Dr. Rakesh Kumar, a physician in the northern Indian state of Uttar Pradesh. “They are saying, ‘We are paying for the facilities; then why are our patients dying?’”

Medical professionals in India face crushing conditions. “No hospital has shut down and no doctor has retreated from the front lines,” one doctor wrote in a Facebook post. “We are fighting missiles with sticks but we are not leaving the fort.”

The vaccine rollout in India has been too slow to stem the wave of cases, despite the country’s status as one of the world’s leading vaccine producers. Less than 2 percent of its residents are fully vaccinated, and less than 10 percent have received at least one dose.

Other countries and regions are also seeing worrisome trends. Uruguay, currently experiencing the world’s highest cases per capita, is adding almost 3,000 cases per day — a staggering number in a country of just 3.5 million people. Indeed, much of South America is faring poorly: In addition to Uruguay, Paraguay, Brazil, Peru, Argentina and Colombia all rank among the top 20 nations in the world for Covid deaths per capita as of Thursday.

Several factors have combined to fuel the outbreak in South America. In Brazil, the continent’s largest country, President Jair Bolsonaro’s dismissive attitude toward the threat posed by the virus has led to a monthslong crisis that has spilled over into neighboring nations. And early research has indicated that the P.1 variant, first identified in the Brazilian city of Manaus late last year, might be more transmissible and more deadly than earlier forms of the virus.

Colombia’s second largest city, Medellín, is also among the places seeing severe outbreaks. Officials there largely managed to control the virus last year. But a second and third wave, in January and April, have devastated the city. Though officials added a thousand new intensive care units in the region in 2020, that preparation has not been enough.

On a recent day, Dr. Andrés Aguirre, who leads Hospital Pablo Tobón Uribe, said that about 300 patients in Medellín and the surrounding area were waiting for space in an intensive care unit. And with vaccination moving slowly across the region, he said, he expected the situation to worsen: “The fourth peak and fifth peak will come.”

Central and Eastern Europe account for half of the 20 nations with the highest Covid deaths per capita. Further east, a surge of cases in Turkey has led to a new lockdown that began on Thursday evening and is set to last three weeks.

And in parts of western Europe, elevated case rates have reached a plateau or only very slowly begun to decline. New cases remain especially high in France, the Netherlands and Sweden. The region has been battered by a wave of new cases this spring amid the rise of the B.1.1.7 variant.

In a news conference on Thursday, Dr. Tedros Ghebreyesus, the director general of the World Health Organization, expressed appreciation for the outpouring of international support India has received during its crisis, which has included cash and medical supplies from all over the world.

“At the same time, we must remember that many other countries all over the world are still experiencing intense transmission,” Dr. Tedros said.

After briefly discussing the state of the virus in Brazil, which has begun to see a decline in deaths from its worst days earlier this month, Dr. Tedros added: “The pandemic has taught us that no country can ever let down its guard.”