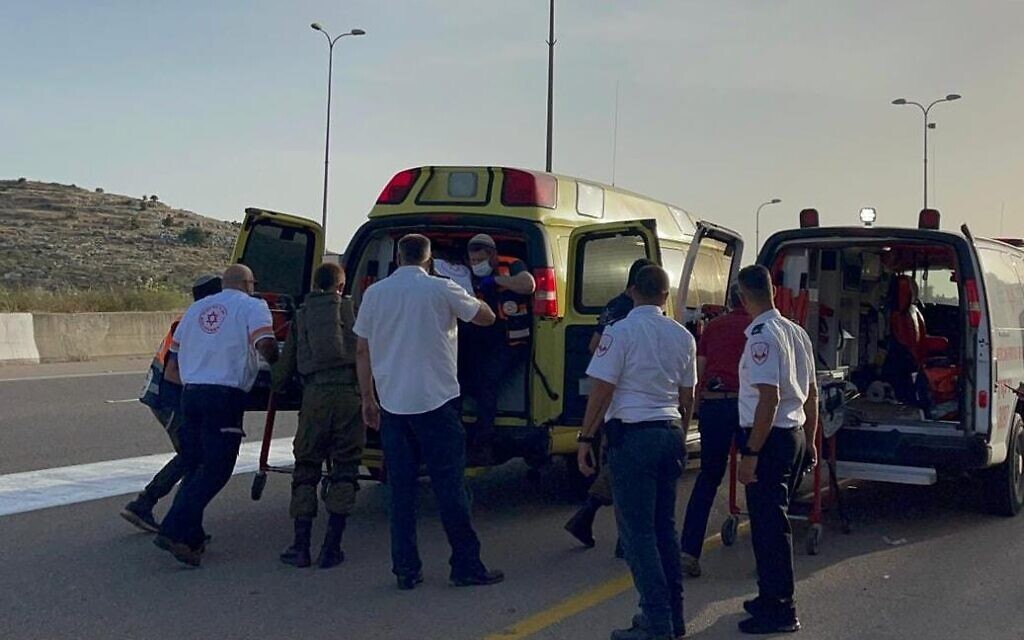 Three 19-year-old yeshiva students were injured, two of them seriously, in a drive-by shooting at a bus stop in the northern West Bank on Sunday evening, Israeli authorities said.

The shots were fired from a passing car at the Tapuah Junction south of Nablus. The victims were all civilians, according to the Israel Defense Forces.

“IDF troops returned fire at the vehicle, which fled the scene. IDF troops are searching for the vehicle and are setting up roadblocks in the area,” the military said.

Medics said one of the victims, Yehuda Guetta from Jerusalem, was in critical condition and received CPR en route to the hospital, while the second seriously injured man, Benaya Peretz from Beit Shean, was in and out of consciousness. The third, Amichai Hala from Safed, sustained light injuries, medics said.

The nearby settlement of Itamar said the victims were students at its yeshiva, or seminary.

Security camera footage of the attack (above) showed the silver SUV pull up to the bus stop and hit the brakes — seen at the 16-second mark — before someone inside opens fire. The students and a soldier who was at the scene are seen scrambling to take cover behind a concrete barrier, as the car then speeds off in the direction of Ramallah.

“IDF and security forces will not rest until they get their hands on the terrorists who carried out the attack,” Defense Minister Benny Gantz said in a statement after the shooting.

Prime Minsiter Benjamin Netanyahu said he was sure that security services would track down the assailants quickly.

“We will not allow terror to raise its head, and we will strike our enemies forcefully,” Netanyahu said in a statement.

Medics said the three people injured in the attack were men in their late teens or early 20s. They were taken to Petah Tikva’s Beilinson Hospital for treatment.

“Many medical teams from different specialities are providing treatment and do what they can to stabilize the conditions [of the two seriously injured victims,” a hospital spokesperson said.

“The families of the victims are on their way to the hospital,” she added.

The apparent terror attack came amid heightened tensions in the West Bank after the Palestinian Authority announced it was indefinitely delaying elections planned for later this month, blaming the decision on Israeli refusal to allow PA voting in East Jerusalem. The explanation was widely seen as largely being an excuse to avoid elections that would have likely resulted in a victory for PA President Mahmoud Abbas’s rivals, the Hamas terror group.

The IDF bolstered its forces in the West Bank for the month of Ramadan, in case of violence stemming from the effective cancellation of the Palestinian elections.

Following large terror attacks, such as the shooting on Sunday evening, the Israeli military works to quickly restore calm to the West Bank out of a belief that such events tend to inspire copycats.

Palestinian terror groups praised the shooting attack on Sunday evening, but none took responsibility for it.

“This comes as a the natural response to the crimes of the Zionist occupation and an act of support for our people in the city of Jerusalem. This is a legitimate branch of the our Palestinian people’s resistance in the West Bank, and we salute the rebellious heroes of the West Bank,” Hamas spokesperson Abd al-Latif Qanou said in a statement.

“We praise the courageous operation at [Tapauch Junction]. We consider it a message in the name of the entire Palestinian people that Jerusalem is a red line and harming the holy places will cause an explosion of anger in the face of the occupation,” the Palestinian Islamic Jihad terror group said.

Earlier in the day, Israeli security forces shot dead a Palestinian woman brandishing a knife who the military said tried to carry out a stabbing attack at the Gush Etzion Junction in the West Bank, south of Jerusalem.

The woman, a 60-year-old resident of the nearby village of Husan, approached a group of soldiers with a knife in her hand and tried to stab the troops, the military said. Palestinian media later identified her as Fahima al-Hroub.

One of the soldiers shot her in the upper body, and she was taken to Jerusalem’s Shaare Zedek Medical Center in critical condition, where she was later pronounced dead, the hospital said. There were no casualties among the soldiers, according to the IDF.

Footage of the incident published by Hebrew media showed al-Hroub walking toward the soldiers even as they shouted at her repeatedly to stop and fired warning shots in the air.