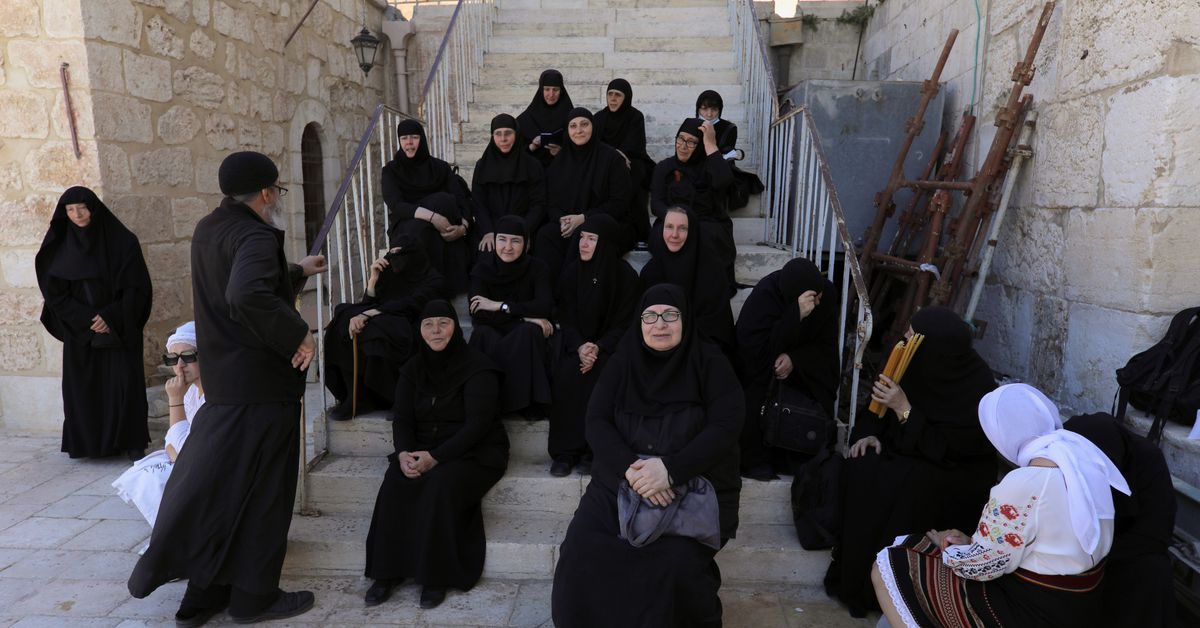 Orthodox Christians flocked to Jerusalem’s Church of the Holy Sepulchre on Saturday to celebrate the Holy Fire ceremony, gathering in far greater numbers than last year because coronavirus restrictions have eased.

This season’s religious holidays in the Holy Land, home to religious sites sacred to Christians, Jews and Muslims, have been overshadowed by tragedy, as Israel mourns the death of 45 Jewish worshippers killed in a stampede overnight between Thursday and Friday at a religious festival in the north of the country. Children were among the casualties. read more

“I listened to the radio, when the parents were talking, I was crying because I have a small son. I cried for the kids,” said Zaira Didmanidze, 40, one of the 2,500 people who attended the Holy Fire ceremony.

The ceremony, symbolising Jesus’s resurrection, is one of the most colourful spectacles of the Orthodox Easter season, usually attended by many pilgrims.

With Jerusalem under lockdown last year’s Holy Fire ceremony was held in the near-empty church that is revered by Christians as the site of Jesus’s crucifixion, burial and resurrection.

Orthodox Christian worshippers sit outside the Church of the Holy Sepulchre on the day of the Holy Fire ceremony, amid eased coronavirus disease (COVID-19) restrictions, in Jerusalem’s Old City, May 1, 2021. REUTERS/Ammar Awad

“Last year it was a sad year,” said Rosaline Manees, a pilgrim from Jaffa. “This year is better, though not like other years as pilgrims from all over the world are not visiting the country. Today it is only us who live in the country. But, sure, better than last year.”

Israel’s swift vaccination drive has largely beaten back the pandemic in the past few months, allowing for restrictions on gatherings to be greatly eased as officials plan a resumption of international tourism in the coming months.

The Holy Fire ceremony typically draws tens of thousands of worshippers to an imposing grey edicule in the Holy Sepulchre that is believed to contain the tomb where Jesus lay 2,000 years ago.

Sunbeams that pierce through a skylight in the church’s dome are believed by worshippers to ignite a flame deep inside the crypt, a mysterious act considered a Holy Saturday miracle each year before Orthodox Easter Sunday.

Jerusalem’s Greek Orthodox Patriarch then emerges from the crypt where Christians believe Jesus was buried, lights a candle with the Holy Fire and disperses it to the faithful.