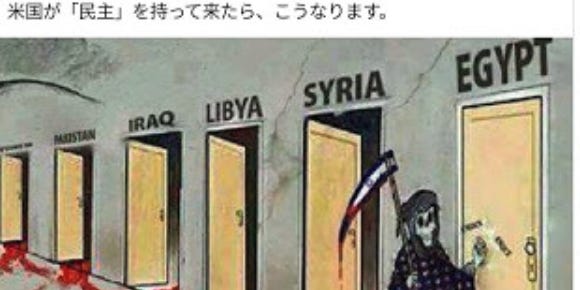 The Chinese Embassy in Japan tweeted and then deleted an antisemitic and anti-US meme after Israeli officials reached out, according to The Jerusalem Post.

The tweet, posted on Thursday night, featured a cartoon image of a grim reaper wearing an American flag. The reaper appeared to be knocking on a door labeled ‘Egypt’  and to have left a trail of blood behind. The other doors in the image are labeled Afghanistan, Pakistan, Iran, Libya, and Syria.

On the reaper’s scythe was an Israeli flag with a Jewish Star of David centered. “If the United States brought ‘democracy,’ it would be like this,” the caption read in Japanese.

The cartoon has been featured on several extremist websites and is popular with white supremacists and Holocaust deniers, the Jewish journal Algemeiner reported.

Read more: INTERVIEW: Henry Kissinger on the political consequences of the pandemic, China’s rise, and the future of the European Union

But it was only deleted after interventions from high-profile Israeli politicians.

Israel’s ambassador to Japan, Yaffa Ben-Ari, contacted his Chinese counterpart to point out that the image is offensive, The Jerusalem Post reported. The Chinese ambassador replied that he was unaware that Israel was featured in the image, the paper said.

The same image was posted by the Chinese Embassy in Paris last year, the Algemeiner reported.

It has also been featured on the websites of high-profile Holocaust deniers, according to French monitoring organization Conspiracy Watch.

The Chinese Embassy in Japan has not publicly addressed the tweet. It did not immediately respond to Insider’s request for comment.