Amit Hadad, an attorney for Prime Minister Benjamin Netanyahu in his corruption trial, will reportedly represent the families of the victims killed in the Lag B’Omer disaster on Mount Meron.

A article posted on the Kikar HaShabbat Haredi news site, which was later deleted, said that Hadad was “coordinating the many lawsuits” after “being approached by rabbis and representatives of the families.” According to reports, the now-deleted post appeared to be sponsored content on the site. The post included a phone number for an emergency hotline for families to call in order to seek legal representation.

A spokesperson for Hadad said the attorney was approached by figures in the Haredi community about taking a role in any future civilian lawsuits pertaining to the disaster.

In a statement to the Ynet news site, Hadad’s office said that the attorney “has a deep understanding and connection to the Haredi community. After the disaster, senior Haredi figures reached out to see if attorney Hadad would agree to give his time and his office in order to assist the families of those injured and killed at Meron. It is unfortunate that there are those who are sadly cynically trying to connect the tragedy to his representation of the prime minister. There is no basis.” 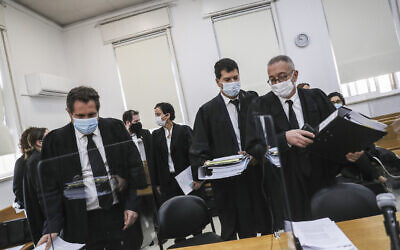 Reports of Hadad’s potential involvement have already raised concerns about a conflict of interest, with Netanyahu named as a potential target for families seeking to hold the government responsible. The Israel Bar Association says it will look into the matter if a complaint is made.

At least 45 people were killed on Friday during the crush on Mount Meron at a religious festival marking Lag B’Omer. Israel was observing a national day of mourning on Sunday for the victims, who ranged in age from 9 to 65. The final funerals for the victims were scheduled for Sunday, and 16 people remain hospitalized following the event.

Elected representatives and public officials have begun to point fingers over the tragedy, considered the deadliest civilian disaster in Israel’s history. Many have called for a state commission of inquiry into the incident.