Pope Francis prayed for the end of the pandemic in a special service in St Peter’s Basilica on Saturday at the start of a ‘marathon’ month of prayer asking for the ‘hard trial’ to be over.

The pontiff asked for the return of what he called ‘a horizon of hope’, including a scenario in which scientists conquer the coronavirus, at the service attended by 200 people.

Speaking softly at the evening rosary service, Frances lamented how the pandemic has left so many people ‘anguished, bewildered and weeping for their dear ones who have died, buried sometimes in a way that wounds the soul.’ 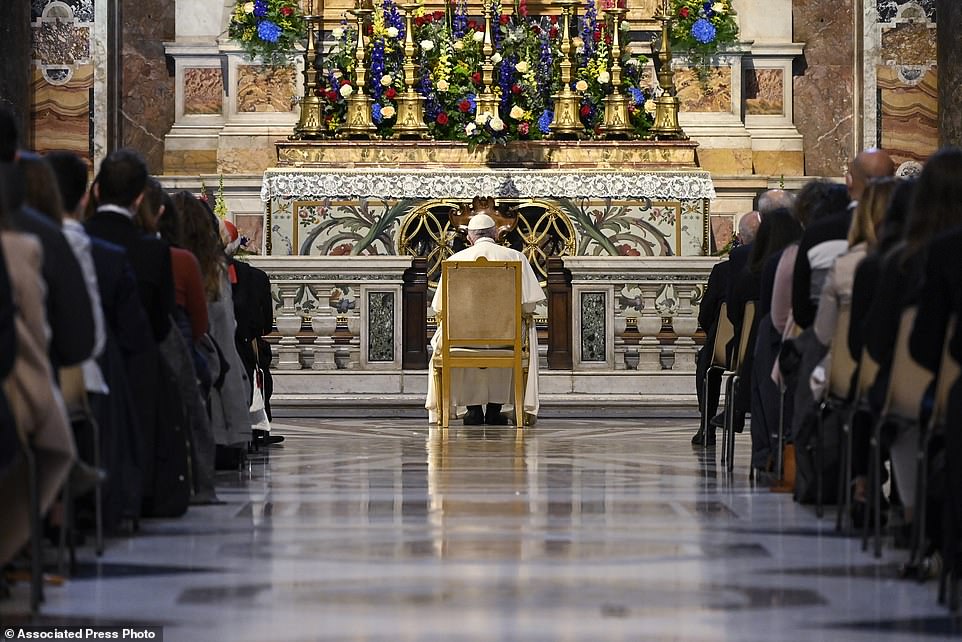 Pope Francis prays in the Gregorian Chapel in St. Peter’s Basilica at the Vatican on Saturday, asking for an end to the pandemic 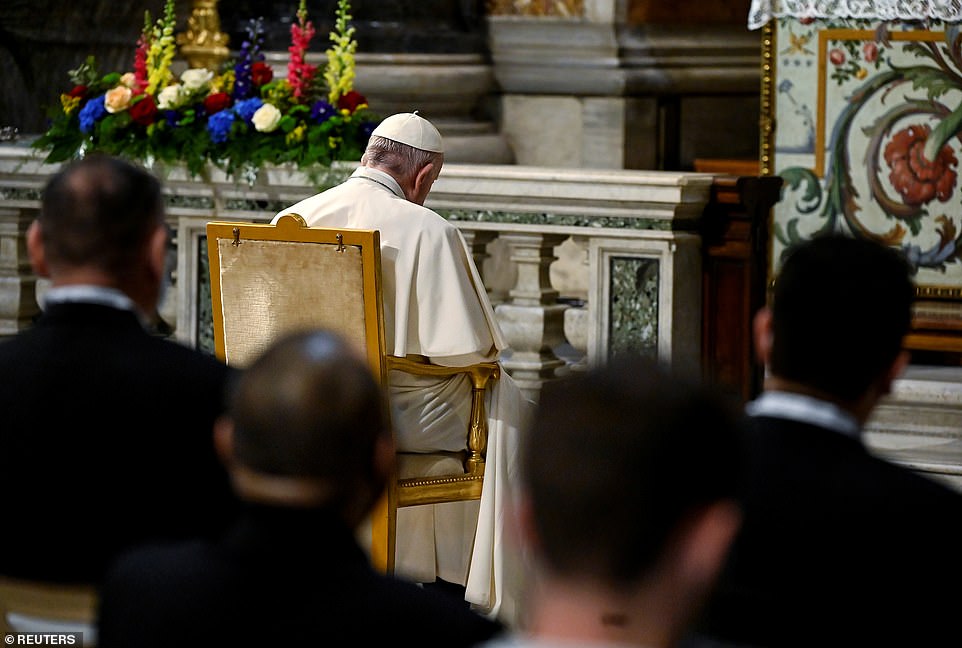 The pontiff asked for the end of the ‘hard trial’ and the return of what he called ‘a horizon of hope’, including a scenario in which scientists conquer the coronavirus, at the service

Invoking the intercession of the Virgin Mary with God, Francis prayed that ‘this hard trial end and that a horizon of hope and peace return.’

Francis also prayed for health care workers on the front lines and as well as for ‘the men and women of science, so that they find right solutions to conquer this virus.’

Also remembered in his remarks were ‘all the women who have suffered violence within the walls of their homes’ due to mandated lockdowns.

The pope implored in prayer that national leaders use wisdom and generosity in planning social and economic solutions ‘with foresight and the spirit of solidarity.’

He urged that defence funds be used instead for research ‘to prevent similar catastrophes in the future.’ 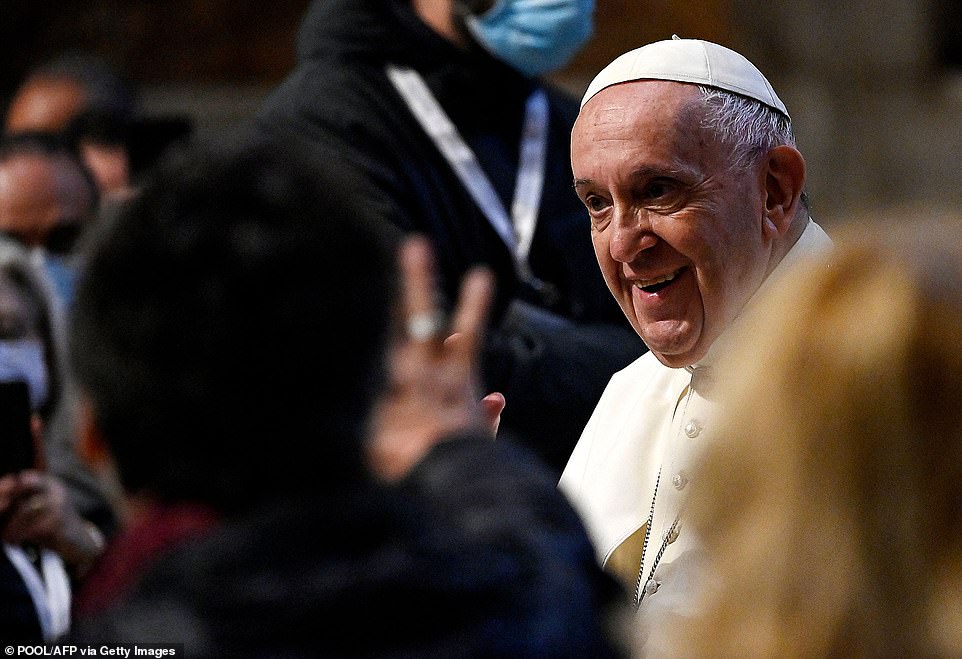 Invoking the intercession of the Virgin Mary with God, Francis prayed that ‘this hard trial end and that a horizon of hope and peace return’ 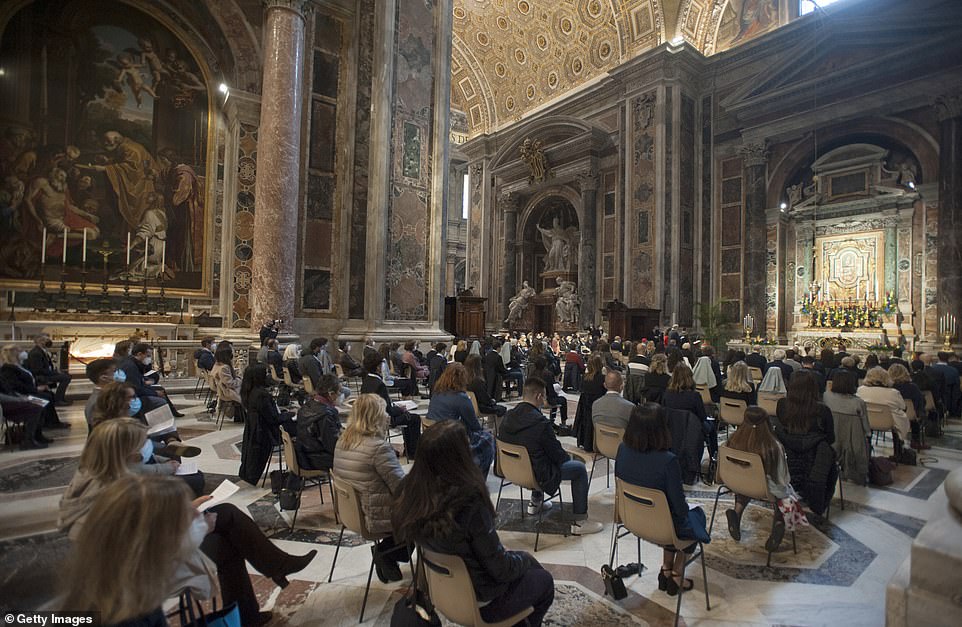 Francis led an evening rosary service attended by about 200 rank-and-file faithful, including many children, who sat spaced apart according to COVID-19 protocols

Every day for the rest of May, Catholic sanctuaries in the world dedicated to Mary will take turns holding a similar rosary service.

Francis will hold the month’s final rosary recitation in the Vatican Gardens at the end of May with a specially-broadcast prayer.

He announced the ‘marathon’ month of prayer throughout May in late April and encouraged Catholics around the world to dedicate the 31 days to praying for the end of the virus which was killed more than three million people.

‘The initiative will involve all the Shrines of the world in a special way, so that they might encourage the faithful, families, and communities to recite the Rosary to pray for an end to the pandemic,’ the Pontifical Council for Promoting the New Evangelization said in a statement at the time.

The move came after the Pope marked Easter Sunday with an address with called for vaccines to be shared with poorer countries.

He also said he prays that the Covid-19 lockdown restrictions will be lifted soon. 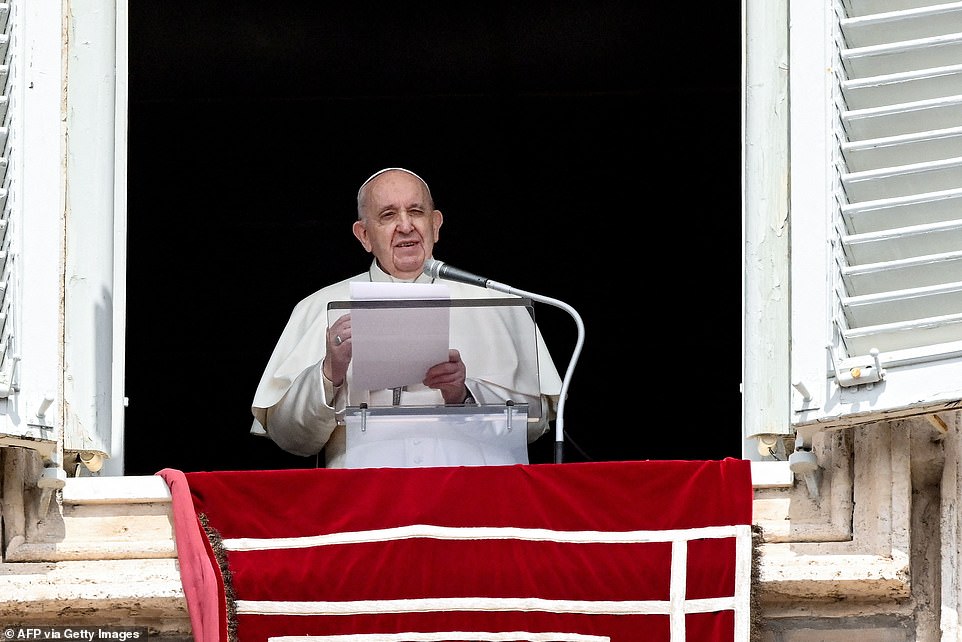 In April, Pope Francis announced a ‘marathon’ month of prayer throughout May with the aim of ending the Covid-19 pandemic

‘Dear brothers and sisters, once again this year, in various places, many Christians have celebrated Easter under severe restrictions and, at times, without being able to attend liturgical celebrations,’ he said.

‘We pray that those restrictions, as well as all restrictions on freedom of worship and religion worldwide, may be lifted and everyone be allowed to pray and praise God freely.’

In March, the pontiff marked a second Palm Sunday during the pandemic and warned ‘the Devil is taking advantage of the crisis to sow distrust, desperation and discord’.

The pontiff traditionally leads a Palm Sunday procession through St Peter’s Square in front of tens of thousands of pilgrims and tourists clutching olive branches and braided palms before celebrating an outdoor Mass.

But as the Pope did last spring, just weeks after the Covid-19 outbreak erupted in Italy and the country became the epicentre of the European epidemic, he led the solemn service that begins Holy Week inside St Peter’s Basilica. 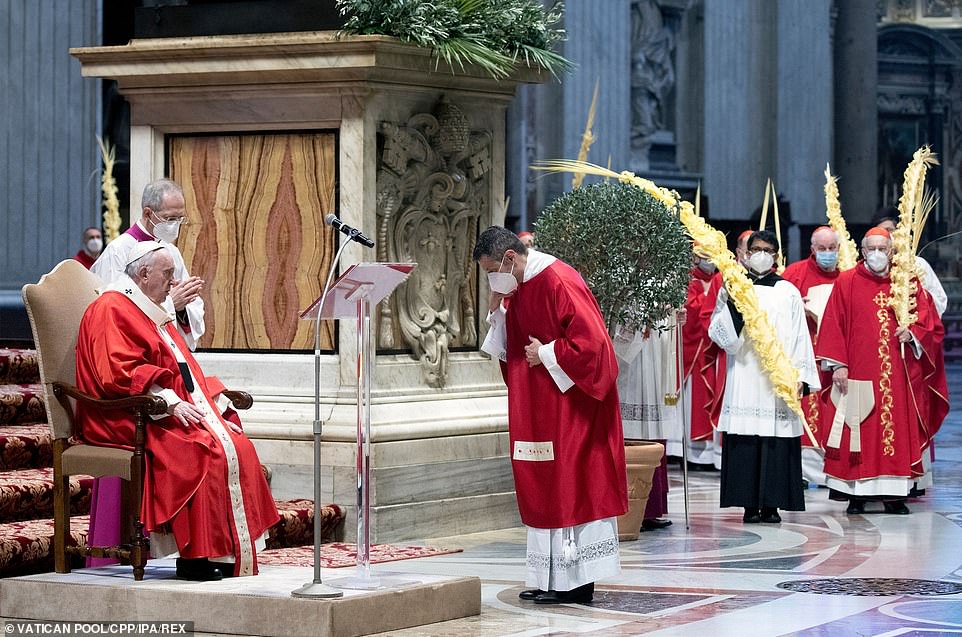 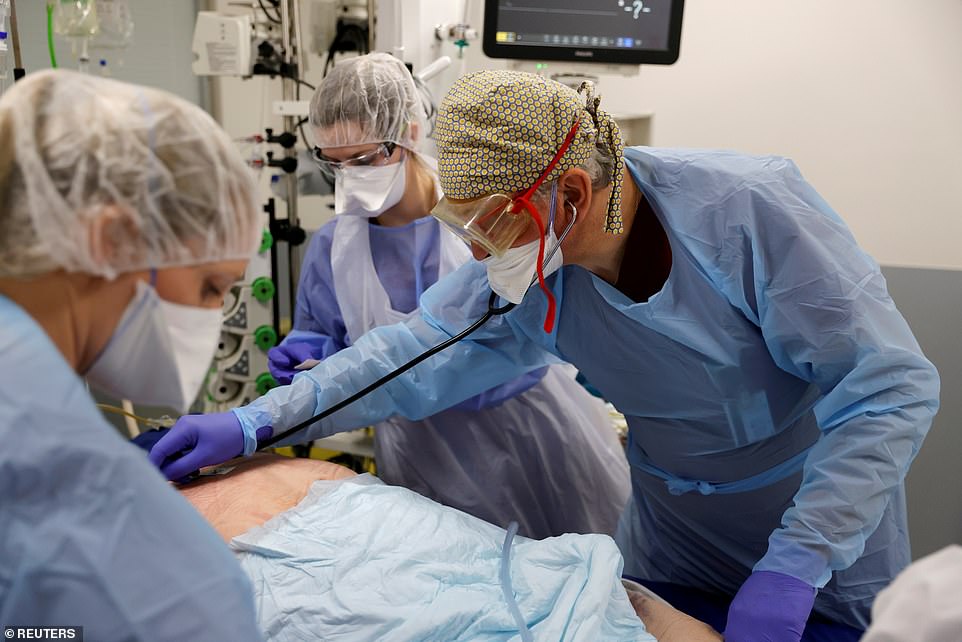 The global death toll from Covid-19 has surpassed 3 million, with recent case spikes reported in India and Brazil

In March, Pope Francis also ordered cardinals to take a pay cut and reduced the salaries of most other Vatican clerics as the coronavirus pandemic hits the Holy See’s income.

The pontiff has often insisted that he does not want to fire people in difficult economic times, even as the Vatican continues to run up deficits.

The virus has wreaked havoc across the world, with many countries facing soaring cases and deaths.

The latest resurgence of infections, especially in Brazil and India, comes despite vaccination efforts.

Health officials blame more infectious variants that were first detected in the UK and South Africa, along with public fatigue with lockdowns and other restrictions.

Sorgente articolo:
Pope prays for end of pandemic, asks for end of ‘hard trial’ and return of ‘horizon of hope’ – Daily Mail