Israeli settlers attacked a Palestinian village in the northern West Bank in the predawn hours of Monday morning, throwing rocks and starting fires, in an apparent act of revenge following a shooting attack nearby the day before, according to the left-wing human rights group B’Tselem.

Clashes broke out between the residents of Jaloud village and the Israelis from the nearby Shiloh settlement, whereupon the Israel Defense Forces and Border Police attempted to break up the fighting by firing rubber-coated bullets and other riot dispersal weapons at the Palestinians, injuring four people.

Eleven Palestinian residents of the village were also arrested by the IDF.

During the incident, several police vehicles’ tires were apparently punctured by settlers. No Israelis were arrested.

Videos from the scene filmed by Palestinians and released by B’Tselem show the fires and clashes, including stun grenades being thrown by Israeli troops.

The military confirmed that it had intervened after a “conflict” broke out, but would not comment further on what sparked it.

The attack by Israeli settlers and resulting clash with Palestinians came as the IDF sought to return calm to the West Bank following Sunday’s terror attack by sending reinforcements to assist in the ongoing search for the gunmen behind the drive-by shooting at the Tapuah Junction, to prevent additional attacks, and to stamp down on retaliations against Palestinians by Israelis such as the one that took place early Monday.

The military and Shin Bet security service were continuing their search efforts on Monday for the terrorists who committed the shooting attack on Sunday evening, which left three 19-year-old yeshiva students wounded.

The IDF had initially said that it was believed there was only one assailant behind the attack, but on Monday said they were looking for more than one suspect.

IDF Chief of Staff Aviv Kohavi visited the scene of the drive-by shooting on Monday, meeting with local commanders to discuss both the manhunt and the general efforts to maintain calm in the West Bank amid growing tensions.

“The IDF sent reinforcements and expanded its operational activities in recent weeks in Judea and Samaria as part of its preparation for an escalation [of violence],” Kohavi said following the visit.

“Many troops, assisted by intelligence official and the Shin Bet security service, are working to find the assailants and will continue until they’ve completed the mission,” he said. 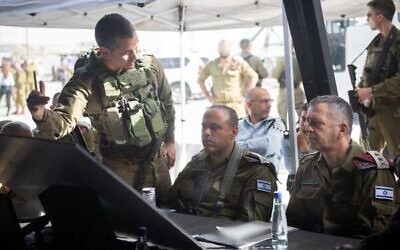 According to Beilinson Hospital where the three were taken, one of the victims, Yehuda Guetta from Jerusalem, remained in critical condition as of Monday morning with a head wound, with doctors fearing for his life.

Benaya Peretz from Beit She’an, who was shot in the back, remained in very serious condition. The third victim, Amichai Hala from Safed, was released from the hospital to recover from his wounds at home.

The three victims were students at a yeshiva in the nearby Itamar settlement.

Security camera footage of the attack (above) showed a silver SUV pull up to the bus stop and hit the brakes — seen at the 16-second mark — before someone inside opens fire. The students and a soldier who was at the scene are seen scrambling to take cover behind a concrete barrier, as the car then speeds off in the direction of Ramallah.

“IDF and security forces will not rest until they get their hands on the terrorists who carried out the attack,” Defense Minister Benny Gantz said in a statement after the shooting.

The terror attack came amid heightened tensions in the West Bank after the Palestinian Authority announced it was indefinitely delaying elections planned for later this month, blaming the decision on ostensible Israeli refusal to allow PA voting in East Jerusalem. Israel had not officially stated its position on East Jerusalem voting, and the explanation was widely seen as an excuse to avoid elections that would have likely resulted in a victory for PA President Mahmoud Abbas’s rivals, the Hamas terror group.

The IDF also bolstered its forces in the West Bank for the month of Ramadan, a period that regularly sees an uptick in terrorist activity.

Palestinian terror groups praised the shooting attack on Sunday evening, but none took responsibility for it.

“This comes as the natural response to the crimes of the Zionist occupation and an act of support for our people in the city of Jerusalem. This is a legitimate branch of our Palestinian people’s resistance in the West Bank, and we salute the rebellious heroes of the West Bank,” Hamas spokesperson Abd al-Latif Qanou said in a statement.

“We praise the courageous operation at [Tapuah Junction]. We consider it a message in the name of the entire Palestinian people that Jerusalem is a red line and harming the holy places will cause an explosion of anger in the face of the occupation,” the Palestinian Islamic Jihad terror group said.

The shooting attack came hours after Israeli security forces shot dead a Palestinian woman, Fahima al-Hroub, who was holding a knife and who the military said tried to carry out a stabbing attack at the Gush Etzion Junction in the West Bank, south of Jerusalem.

The woman, a 60-year-old resident of the nearby village of Husan, approached a group of soldiers with a knife in her hand and tried to stab the troops, repeatedly ignoring their calls to halt. Her actions were widely seen as an effort to commit so-called “suicide by soldier.”

One of the soldiers shot her in the upper body, and she was taken to Jerusalem’s Shaare Zedek Medical Center in critical condition, where she was later pronounced dead, the hospital said. There were no casualties among the soldiers, according to the IDF.