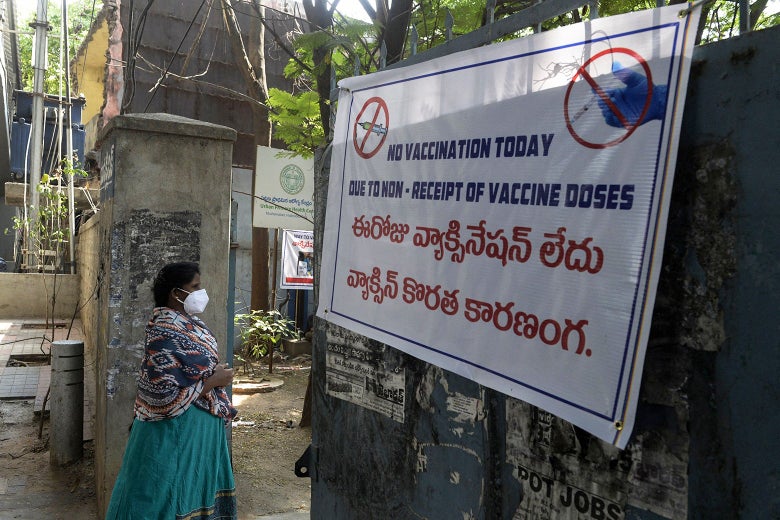 In January, at the 2021 Executive Board session of the World Health Organization, Director-General Tedros Adhanom Ghebreyesus described the hoarding of COVID-19 vaccines by wealthy countries as a “catastrophic moral failure.” This hoarding has continued, and by mid-March 14 percent of the world’s population had access to more than half its vaccines. It’s a decision that could devastate everyone. Modelling suggests that this trend of wealthy countries stockpiling COVID-19 vaccines will result in nearly twice as many deaths as would occur if vaccines were shared equally across the globe, with an economic cost running into the trillions of dollars. Failure to vaccinate globally may also give time for new variants to undermine existing vaccinations, and draw out the pandemic. Indeed, we are seeing the human cost of inequitable access to medical countermeasures during this pandemic in India as you read this.

The decision of whom to vaccinate globally has pitted so-called “vaccine nationalists,” who defend the right of nations to vaccinate their own people first by any means, against “globalists” who want more equitable approaches to vaccine allocation—approaches in which access to the vaccine is on the basis of need, rather than on the ability to pay. Some have tried to square this argumentative circle by suggesting that while the United States and other developed nations have a right or obligation to protect themselves first, they ought to give up vaccines they don’t need, or that they aren’t using. That is, once we have an excess of actual vaccines, and not just an excess of ordered vaccines. This is, in essence, what the Biden administration recently announced with its commitment to donate up to 60 million doses of “excess” AstraZeneca vaccine, which the U.S. had been stockpiling in anticipation of the vaccine being approved for use by the FDA. (It now seems unlikely that the U.S. will need AstraZeneca to vaccinate everybody.) The Biden administration’s about-face has only come after a deluge of political pressure, from a stance of outright protectionism to something softer—if arguably inadequate to the task to rolling back the COVID-19 onslaught abroad.

But not softening is not enough. Even this approach simply shifts the goalposts on our moral failing, by failing to recognize the most important thing to developed and developing countries alike: ending this pandemic.

The moral and practical failing of vaccine nationalism, even partial nationalism, is a rare moment where there shouldn’t be disagreement between people with different values. If what you care about is lives saved, as public health experts typically claim they do, then there’s no question that equitable global distribution of COVID-19 vaccines should be our default. Millions of lives and the trajectory of the pandemic itself hang in the balance and refusing to distribute vaccines globally only worsens that. Experts can laud the science behind the vaccines all they want, but at the end of the day that’s lauding the wrong thing. Vaccines don’t save lives, vaccination does.

The global nature of the vaccine also requires us to pursue global vaccine equity. These vaccines weren’t just made in America by American scientists (whatever that means) and therefore the American people get first claim. The sequences that gave the U.S. the Moderna vaccine relied on the work of Chinese scientists working tirelessly in the earliest stages of the pandemic. The AstraZeneca vaccine was designed in collaboration with Oxford University, but tested in Brazil and South Africa as well as the United Kingdom. The raw materials for the vaccine are imported from all over the globe. If what you care about is vaccine equity as a good in and of itself, as many increasingly do, the contours of the pandemic require us to treat other nations fairly.

But let’s say you don’t care about any of that. Everyone still has a reason to prefer vaccine globalism—even the nationalists. Even if all you care about are your citizens interests, or national self-interest, or even just your own interest, the overriding concern should be ending this pandemic. An entire nation of vaccinated people isn’t safe from the effects of this pandemic. Global trade and travel are still disrupted; and variants are still going to nibble away at a nation’s immunity to COVID-19. The costs of maintaining a defensive posture will drag out. Ask the nations who have been largely COVID-19 free, like Australia or New Zealand, what it costs to protect a country while the rest of the world languishes.

The moral case against vaccine nationalism is strong. But we shouldn’t just give poorer nations our spares—that’s merely another, different failing. We need to engage proactively in a successful global vaccination campaign, in a system that pursues true equitable access.

First, real time sharing should be the order of the day, which means abandoning any remaining Advance Purchase Agreements. APAs are legally binding contracts in which a government commits to purchasing a predetermined number of doses from a manufacturer of a potential vaccine, thereby securing priority access ahead of other nations. It is these agreements that have placed wealthy governments, such as ours, in the position they are in.  Vaccines should be supplied to nations on the basis of robust fair allocation frameworks as and when those vaccines are manufactured. Nations should not be forced into a queue such that delays in access to vaccines based on their bargaining power. No one should be able to buy their place at the head of the queue.

Second, frameworks for the fair allocation of resources should seek to adopt intentionally global standards. That is, while vaccines must ultimately be managed locally once supplies are delivered, high-level distribution principles should not assume national priority over vaccines, even implicitly. Frameworks and guidance should explicitly note that pandemic vaccine distribution must account for global needs. Failing to do this makes designers of those allocation frameworks complicit in establishing presumptive vaccine nationalism from which we must now escape.

This would be a new frontier in global health policy. It is possible that individual nations could begin unilaterally assisting other nations with their vaccination needs. But we suspect it will require the involvement of member states of the WHO or a similar global governing body to form a consensus on the need for global end to COVID-19, in a form to the Global Commission for the Certification of Smallpox Eradication, which supervised the coordinated elimination of that disease in the 20th century. We don’t underestimate the immense political effort this would require, but the moral and public health costs are too high to sit on our hands.

Finally, global sharing of vaccines should not be conditioned on infrastructural capacities: Leading bioethicists in Science recently claimed, “Allocating vaccine doses to countries lacking the infrastructure to administer them would unjustifiably waste a lifesaving resource.” Yet there is no reason why we should prefer to provide vaccines to developed countries with infrastructure in place, over simply making sure those capacities exist as part of the COVID-19 response. If we have an obligation to end this pandemic, then we have an obligation to ensure that the relevant infrastructure exists to make that happen. It doesn’t serve U.S. national interest, much less the demands of justice, to let other countries languish.

We can beat COVID-19. But we need to be smart, proactive, and global to do it. Anything less is marking time for future moral failings.