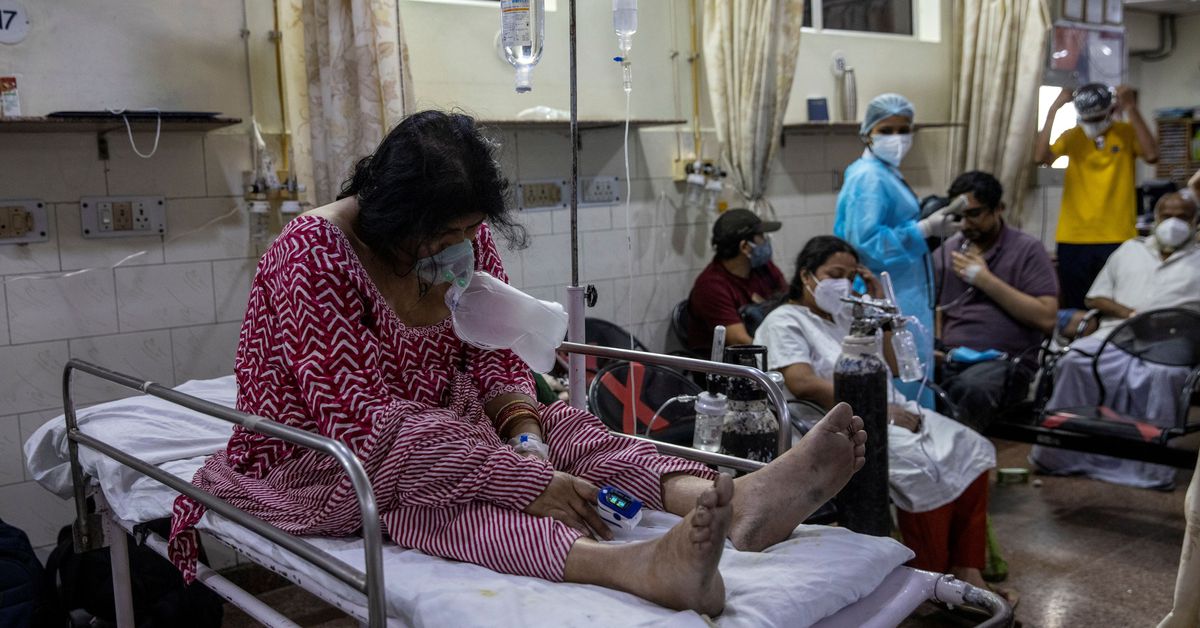 A patient suffering from the coronavirus disease (COVID-19) receives treatment inside the casualty ward at a hospital in New Delhi, India, May 1, 2021. REUTERS/Danish Siddiqui

Indian opposition leader Rahul Gandhi called for a nationwide lockdown as the country’s tally of coronavirus infections surged past 20 million on Tuesday, becoming the second nation after the United States to pass the grim milestone.

India’s deadly second wave of infections, the world’s biggest surge in coronavirus infections, has seen it take just over four months to add 10 million cases, versus more than 10 months for its first 10 million. Currently, the country has 3.45 million active cases.

Medical experts say actual numbers in India could be five to 10 times higher than those reported.

“The only way to stop the spread of Corona now is a full lockdown… GOI’s inaction is killing many innocent people,” Congress MP Gandhi said on Twitter, referring to the Government of India.

Prime Minister Narendra Modi’s government is reluctant to impose a national lockdown due to the economic fall out, yet several states have imposed various social restrictions.

The surge in cases of the highly infectious Indian variant of COVID-19 has swamped the health system, drained supplies of medical oxygen vital for survival for those infected, and seen patients dying in ambulances and carparks outside hospitals.

Rows of funeral pyres in parks and carparks cremate the overflow of corpses.

India has postponed exams for trainee doctors and nurses in a desperate effort to fight the infections sweeping across the world’s second-most populous country.

Modi has been criticized for not moving sooner to limit the latest wave of infections and for letting millions of largely unmasked people attend religious festivals and crowded political rallies during March and April.

“What the recent weeks reveal is that both Centre and states have been woefully unprepared for the second wave,” an editorial in the Times of India said on Tuesday.

Offering a glimmer of hope, the health ministry said positive cases relative to the number of tests fell on Monday for the first time since at least April 15.

Coronavirus cases in some regions were plateauing, a federal health ministry official said on Monday, adding that some states like Chhattisgarh, Delhi, Maharashtra and the most populous one, Uttar Pradesh, had seen a dip in numbers.

Modelling by a team of government advisers shows cases could peak by Wednesday this week, a few days earlier than a previous estimate, since the virus has spread faster than expected.

The surge in COVID-19 in India has coincided with a dramatic drop in vaccinations, due to problems with supplies and delivery.

Despite being the world’s biggest producer of vaccines, India does not have enough for itself. Public forecasts by its only two current vaccine producers show their total monthly output of 70-80 million doses would increase only in two months or more, although the number of people eligible for vaccines has doubled to an estimated 800 million since May 1.

Just 9.5% of the population of 1.35 billion has received at least a single dose.

India has invited Pfizer (PFE.N), Johnson & Johnson (JNJ.N) and Moderna Inc (MRNA.O) to sell their vaccines to the country but none have applied to do so yet. Pfizer has told the Indian government that there was no concern over the safety of its COVID-19 vaccine, as the country insists on small local trials for foreign shots despite a record surge in infections and shortage of doses.

International aid continued to arrive in India on Tuesday, with 545 oxygen concentrators from the United States landing, the fifth in a series of consignments carrying medical equipment.