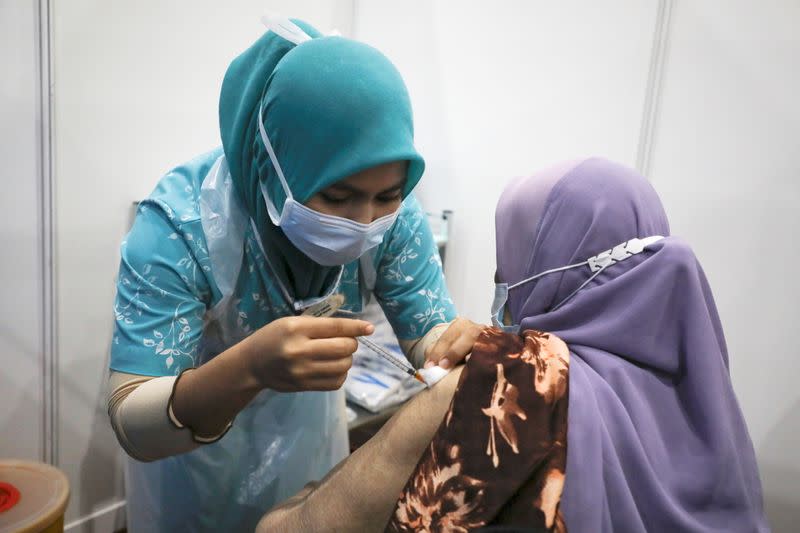 By Rozanna Latiff and Joseph Sipalan

KUALA LUMPUR (Reuters) – Malaysia will begin a parallel COVID-19 innoculation programme this week for people who chose to receive the AstraZeneca vaccine, after it was removed from an ongoing rollout due to public fears over its safety, a minister said on Monday.

Reports of possible links to very rare blood clots have dented confidence in the shot in Malaysia and elsewhere.

AstraZeneca has pointed to regulator recommendations that the vaccine is safe and effective, though some countries have suspended its use due to rising unease or limited it to certain age groups.

Malaysia, which received its first 268,000 AstraZeneca vaccine doses in April, said it would allow people to choose to receive the jab on a first-come, first-serve basis.

The decision was made after around 8,000 people cancelled online vaccination registrations following the government’s announcement that the shot would be part of the nationwide rollout, Science Minister Khairy Jamaludin told reporters.

Data also showed increased vaccine hesitancy with some people not showing up to appointments after AstraZeneca was included, he said.

“The number of cancellations was rising, and this resulted in (authorities) deciding that we should carve out AstraZeneca from the mainstream national immunisation programme,” Khairy said.

Slots for 268,000 doses were filled in just three hours after bookings opened on Sunday, he said, adding the programme that starts on Wednesday would be expanded when more doses arrive.

Malaysia is due to receive 12.8 million doses of the AstraZeneca vaccine, with the next shipment of 1.1 million doses expected to arrive this month.

Khairy said authorities had also decided to limit the use of the vaccine developed by China’s Sinovac Biotech to those aged 60 years or older.

Malaysia is facing a spike in coronavirus cases, with more than 415,000 total infections reported.

Malaysia on Sunday reported its first case of a variant first identified in India, which experts say may have mutations that would make it more transmissible, cause more severe disease or evade vaccine immunity.

The government has also detected 48 cases of the South African variant and eight of the British variant as of May 1, Adham said.