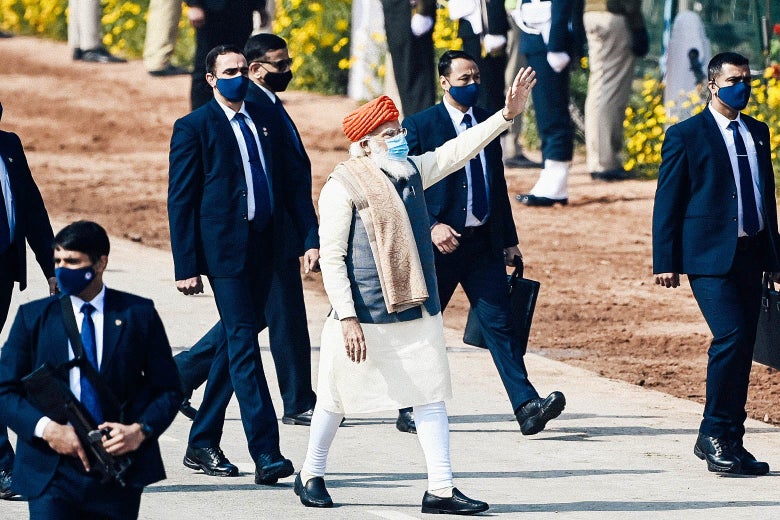 In February, India’s ruling Bharatiya Janata Party passed a resolution declaring that the country had “defeated Covid under the able, sensitive, committed and visionary leadership of Prime Minister Shri Narendra Modi.” It hadn’t.

India has been undergoing a severe COVID resurgence since March: Infections, hospitalizations, and deaths are escalating faster than anywhere else in the world, while dire shortages of vaccines, medical ingredients, and oxygen tanks have denied countless patients the care they’ve needed. Multiple countries have restricted or banned travel from India after receiving Indian passengers with COVID symptoms, and India has stopped shipping vaccines abroad in order to prioritize its population. Yet even in the face of horrific tragedy, Narendra Modi has refused to establish necessary lockdowns to stop viral spread—many individual states have instead enacted their own restrictions, like they were forced to do last year. Instead of focusing on shoring up needed supplies, the government has continued supporting mass Hindu celebrations, attacked its opponents, and cracked down on online information sharing—which many Indians have used to beg for supplies their government won’t grant—in a variety of ways, from its ban of TikTok last year to its attempts to get social media companies to remove critical hashtags. Despite the Modi administration’s attempts to craft self-assured narratives, many Indians realize there’s far more the central government could have done—especially since it had acknowledged a pickup in coronavirus infections as far back as February.

The pandemic has had a mixed impact on authoritarian governments and movements throughout the world—a few have used the emergency to consolidate their authority while others have badly mismanaged the crisis, reviving opposition movements. Until recently, India looked to be in the former category, but could the government’s failures during the latest catastrophic COVID wave weaken Modi’s hold on power?

India’s struggles to address its latest outbreak aren’t entirely the government’s fault. U.S. export restrictions on a key vaccine ingredient have only recently been lifted, an act that will hopefully relieve some of India’s vax shortages. Plus, the World Trade Organization has still not granted the intellectual property waivers that would allow India and others to develop and distribute generic forms of the vaccine. Thankfully, increased global attention has led to international aid for the subcontinent, and countries that were relying on India’s vaccine exports are now receiving limited assistance from other regions, even as the WTO remains stubborn on IP.

Incompetent and callous governance is also not new in Indian politics—in fact, the credibility lost by India’s formerly dominant, liberal-leaning Congress Party due to scandals, crony capitalism, and civil liberties crackdowns helped Modi and the BJP come to national power in 2014, and gave them an even wider mandate in 2019. The BJP has experienced its share of controversies over those years, but has weathered them by interfering with democratic pillars and engaging in high-octane culture warring: appealing to base nationalism by pitting India’s might versus Pakistan and China, trumpeting the supremacy of “traditional” Hindu values, entrenching conservative ideology in formerly independent institutions. Despite mass grassroots resistance by students and farmers (among many others), an economy that was flagging even before the COVID recession, and the noted failure of hyped policy proposals like demonetization, such political tactics have helped Modi remain the most popular political figure in the country.

It’s too soon to say definitively whether that’s changing, but there are some signs of trouble for the prime minister. Members of the RSS, the far-right ideological arm of the BJP, have reportedly expressed anger and disappointment with Modi’s COVID policy—not a small thing considering both that Modi came up through the RSS himself and international branches of the RSS are fundraising for India relief. The hashtag #ResignModi took off around the world last week, before being removed and then reinstated by Facebook. Kolkata’s Telegraph newspaper published an op-ed calling for the Modi administration to step down. Many medical professionals have been afraid to speak out against the current regime, but the vice president of the long-standing Indian Medical Association labeled Modi a “superspreader.” (It perhaps did not help the BJP’s case when a spokesperson told CNN that the “responsibility is first and foremost ours, good or bad.” Not that he was wrong, of course.) Regional courts have slammed the administration’s failure to stem the new wave: The Delhi High Court stated that it would charge government officials if they did not start providing oxygen to hospitals faster (it already may be close to charging the central government with contempt), while the Madras High Court wrote that India’s Election Commission—which has sanctioned recent thousands-strong, maskless campaign rallies led by BJP ministers—“is singularly responsible for the second wave of the pandemic” and that its “officers should be booked on murder charges probably.”

Speaking of elections, last weekend offered the first electoral referenda on the BJP since its 2019 sweep. Over the weekend, anticipated results for local assembly seats in four states and a union territory were officially tabulated. In Assam, where Modi’s government has disenfranchised millions of former citizens, the BJP comfortably held onto its majority, and conservative factions won out in the union territory of Puducherry, whose Congress-led assembly collapsed earlier this year. In Kerala, the long-leading Communist Party, which earned plaudits for its COVID response last year, retained control. None of these results were all that surprising.

The more intriguing races were in West Bengal, where the All India Trinamool Congress party led by Chief Minister Mamata Banerjee kept a sizable assembly majority even as local BJP officials won dozen of seats, and Tamil Nadu, where the left-leaning Dravida Munnetra Kazhagam party upset the state’s ruling conservative party, and took the chief ministership as well as a majority in the assembly for the first time in a decade.

Tamil Nadu’s politics are hyperlocal even by Indian standards—it’s essentially a two-party state, with its guiding ideologies based in the historic Dravidian Self-Respect Movement, a source of pride for India’s Tamil population. The egalitarian principles of Dravidian philosophy fundamentally clash with the BJP’s nativism; the DMK’s campaign tied the state’s ruling party to the BJP and its alleged “anti-Tamil” agenda, in a canny move that led to victory. These elections proved that regional forces are still capable of resisting the BJP and right wingers, if mobilized to do so.

But West Bengal was the core flashpoint for India’s pandemic politics. Banerjee has long been one of Modi’s fiercest adversaries—although she herself has come under fire for her controlling ruling style—and the BJP had looked at this election cycle as a way to weaken her party, and thus her standing and power. Indeed, polls initially showed that the state’s assembly seats could be an ample pickup opportunity for the BJP. West Bengal started its multiphase election process in late March; by April, BJP ministers made the controversial decision to campaign in person right as COVID cases were drastically rising. This decision only spurred more anger within the state toward the BJP while Banerjee and her party campaigned in small, limited spaces, claiming to be following public health protocols. Ultimately, Banerjee and the All India Trinamool Congress emerged triumphant—though the BJP has now firmly established itself in West Bengal’s assembly and is already attempting to further demonize state leadership.

What role did COVID play in these results? It’s worth considering a few factors. West Bengal’s election had voting phases every week up through late April, but the other states collected votes primarily in late March and early April, making it difficult to gauge whether there was a COVID-specific Modi backlash in Tamil Nadu. Plus, when the Congress Party won back a few state assembly elections in 2018, supposedly because of disappointment with Modi, that did not translate to further electoral gains in the 2019 national elections. India’s states are highly distinctive, individual, and diverse, with varying local parties and regional influences and preferred ruling systems; it’s foolish to take any one state’s mandate as a representation of the desires of 1.3 billion people. At either rate, since 2014, anger at and disillusionment with the BJP at any level have not prevented the party from entrenching its power. The BJP can keep interfering with court decisions, passing oppressive laws, suppressing protesters, and spreading disinformation. Plus, with China set to dominate the global stage in the coming years, and Pakistan still a neighboring enemy, Modi can reliably invoke nationalist tropes to get the people riled up on his behalf, even if his touted image of a mighty India, uniquely strong on the world stage, fails to pass muster in the face of the coronavirus.

On the other hand, the grief and devastation from India’s latest health crisis has spread across international borders, and more and more stories of needless deaths and overpressured medical facilities are reported by the day. Indians have long known their health systems are far from adequate, but the current collapse has demonstrated this in even more horrific fashion. This is mass pain and reckoning of the type that has often been felt throughout Indian history, from the Bengal famine to the oppression of the Emergency to the Bhopal disaster—all of which were political turning points. With explicit reports of BJP-led states underreporting COVID death tolls, it won’t be hard for many to figure out who’s really to blame.

And while economic hardship isn’t new under Modi’s regime, COVID has only brought more extreme desolation. Indian news outlet the Print reported that millions of middle-class Indians now reside below the poverty line, and as the Hindustan Times notes, the pandemic has also severely affected upper-class constituencies that have supported Modi. Add to all this the astounding numbers and perseverance of the farmers’ movement, along with the inspiration of the 2019 anti-Modi protests, and one can make out newly energized opposition, provided you squint.

The good news for Modi is that he won’t face new national elections until 2024. His opponents need to not only channel popular rage but also form a durable political coalition with national center-left party leaders. What anti-BJP victories in Tamil Nadu, Kerala, and West Bengal showed is that regional parties—many of which are nominally part of the United Progressive Alliance, a national center-left political coalition—still have some measure of power. The Congress Party is hopeless, and there’s no other national-level replacement just waiting for its chance. To mount a serious challenge to Modi, his most successful opponents need to figure out how to work across state lines.