Syrian state media SANA reported that Syrian air defenses had engaged Israeli missiles near the port city of Latakia in northern Syria and Hama in the West. State TV said one person was killed and 6 injured.  The report said the casualties were civilains.

Videos posted to social media showed a large fire and several loud explosions at the scene of the blast.

SANA said the site was a plastics factory. Israel has reportedly bombed sites connected to Iran’s alleged missile production and arms depots in the areas of Latakia and Hama before.

The Israel Defense Forces refused to comment on the late-night strikes, in accordance with its policy to neither confirm nor deny its operations in Syria, save for those in retaliation for an attack from the country.

The strike was the first reported since April 22, when a Syrian surface-to-air missile crashed to earth near the Dimona nuclear reactor.

The Israel Defense Forces said the sirens were set off not by a directed attack on a target within Israel but by an errant Syrian anti-aircraft missile fired at an Israeli jet during an IAF airstrike on targets in the Syrian Golan Heights.

IDF troops launched an interceptor missile at the incoming projectile to try to shoot it down, apparently unsuccessfully.

Pieces of the Syrian surface-to-air missile landed in open areas of the Ramat Negev region of southern Israel, local authorities said in a message to residents, with some pieces reportedly striking some 30 kilometers from the Dimona nuclear reactor.

In response to the launch of the surface-to-air missile, Israeli jets conducted a second round of airstrikes in Syria, bombing the battery that fired the projectile, as well as other air defense systems, the IDF said.

According to Syrian state media, four soldiers were injured in the Israeli strike and material damage was caused.

The incident came amid peak tensions between Israel and Iran, after an attack on Iran’s Natanz nuclear site earlier last month, which has been widely attributed to the Jewish state. Iran has vowed to retaliate for the alleged Israeli sabotage. 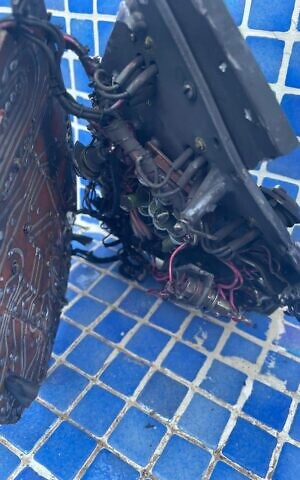 Fragments of a Syrian SA-5 missile fired toward Israel, which landed in a swimming pool in the community of Ashalim in the northern Negev, on April 22, 2021. (courtesy)

IDF Spokesperson Hidai Zilberman stressed that the military did not believe this was a deliberate attack on the country or its nuclear facility.

“There was no intention of hitting the nuclear reactor in Dimona,” Zilberman told reporters.

According to Zilberman, the projectile appeared to be a Russian-made SA-5 surface-to-air missile, a particularly large projectile, weighing several thousand kilograms with a 200-kilogram warhead.

Residents of Jerusalem and central Israel reported feeling reverberations of an explosion. It was not immediately clear if this was caused by the impact of the Syrian missile or by a failed interception attempt.

Though uncommon, Syrian surface-to-air missiles fired at Israeli fighter jets have in the past caused damage and triggered sirens as they fell back to earth.

In 2019, an SA-5 missile that had been fired at an Israeli aircraft landed in northern Cyprus, causing an explosion and a large fire in a village there.

In 2017, two SA-5 missiles that were launched at Israeli jets landed in eastern Israel, while a third landed in Jordanian territory, without causing injury or damage. In that incident, the IDF fired an Arrow 2 interceptor at the incoming projectile in what was the first operational use of the system.