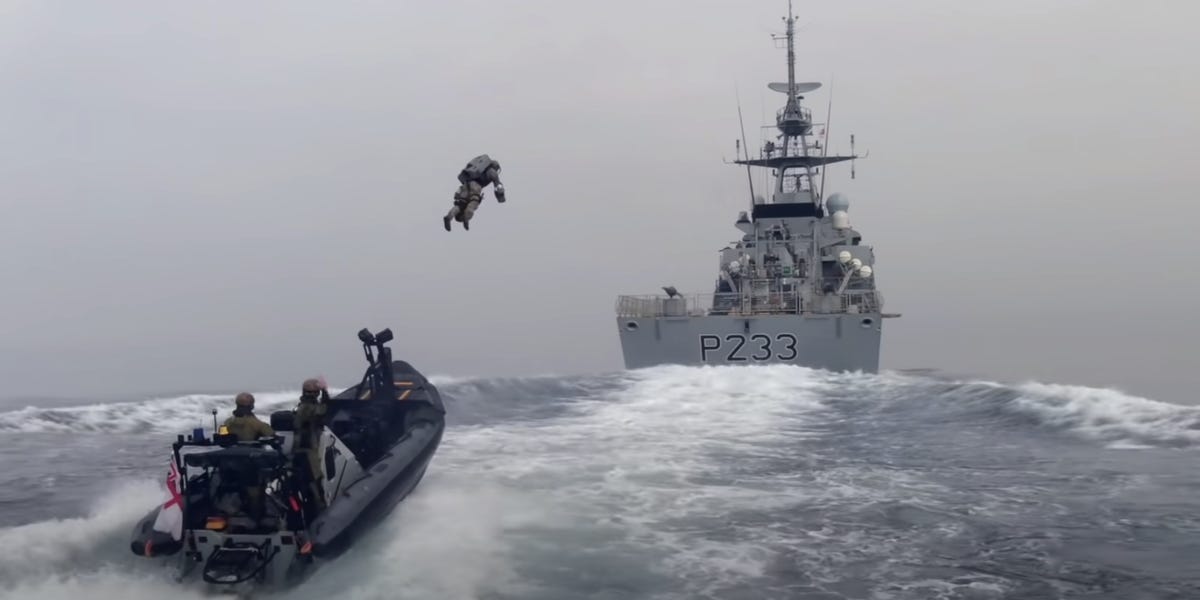 British Royal Marines have been practicing boarding ships with futuristic jet packs that let them fly over the water like Iron Man.

The “Jet Suit” was made by the UK’s Gravity Industries, which released a video Sunday that showed Royal Marines using the jet packs to launch from rigid inflatable boats and land aboard the Royal Navy Batch 2 River-class offshore patrol ship HMS Tamar.

Maritime boarding operations, also known as “visit, board, search, and seizure” operations, are challenging and have traditionally involved troops coming alongside a ship in a fast boat and hooking a caving ladder or fast-roping from a helicopter onto the ship.

A former US Special Forces officer previously told Insider that “VBSS is one of the most complex and dangerous” of maritime-operations missions. He said it often required special equipment and training to execute effectively.

With the jet pack, the wearer can launch from a fast boat, land on the ship, and then drop a ladder that others can use to climb aboard. Royal Marines can be seen doing exactly that in the video.

The jet suit is still experimental, but the vision “is to provide extremely rapid access to any part of the target vessel, instantly freeing up hands to bear a weapon, and even retaining the capability to relocate on target or self-exfiltrate,” Gravity Industries said in its press release.

In the video, one Royal Marine can be seen immediately disconnecting the arm-mounted jets and pulling out a ladder. After the ladder is secured, he pulls out what appears to be a handgun.

“This is increasingly seen as a revolution in tactical capability for many special forces and has much broader application beyond Maritime boarding,” the company added.

The operations depicted in the video were part of a trial, and the British military has not yet made a decision on whether or not it will purchase this technology, Insider has learned.

The new video from Gravity Industries is not the first time that people in jet suits have been seen flying around British ships. Last May, for instance, Gravity released a video of an operator flying from a fast boat onto a Royal Navy P2000 patrol boat during what the company called “assault trials.”

And about a week before that video came out, Gravity released another video showing someone wearing a jet suit flying around the British aircraft carrier HMS Queen Elizabeth and practicing intercepting civilian vessels sailing nearby.

The new video from Gravity comes just a few weeks after the company released footage from a maritime boarding training exercise with the Netherlands Maritime Special Operations Forces.

Outside of the armed forces, paramedics with Britain’s Great North Air Ambulance Service have looked into using jet suits for remote rescue operations, as the suits allow medical personnel to reach someone in distress in a hard-to-reach area much faster than they might otherwise be able to by other means.

The record was set by Richard Browning, the British inventor and founder of Gravity, who flew over 85 mph during a test flight in 2019.