Arab Israelis and Palestinians in the Gaza Strip were expected to hold mass protests on Saturday in the wake of Friday’s clashes in Jerusalem between Palestinians and the Israel Police, in which some 200 Palestinians and 17 officers were wounded.

The Arab High Follow-Up Committee, a body that represents Arab Israelis, called for protests in Arab towns and cities across the country in response to the violence.

The Hamas terror group’s official media outlet said Gaza-based groups were calling for demonstrations near the border fence with Israel on Saturday in protest of Israeli actions in Jerusalem.

The Israeli Committee called for “support of Jerusalem and its people” in the face of “the bloody terrorist aggression against Al-Aqsa Mosque.”

It said it planned to organize delegations to Jerusalem, including to East Jerusalem’s Sheikh Jarrah neighborhood, which has been at the center of recent demonstrations, and to the Al-Aqsa Mosque.

It said that “the aggression of the terrorist occupation army this evening against thousands of worshipers in the blessed Al-Aqsa Mosque, and the wounding of dozens, is a dangerous indicator of what the occupation is planning in the coming days, for the city and Al-Aqsa Mosque.” 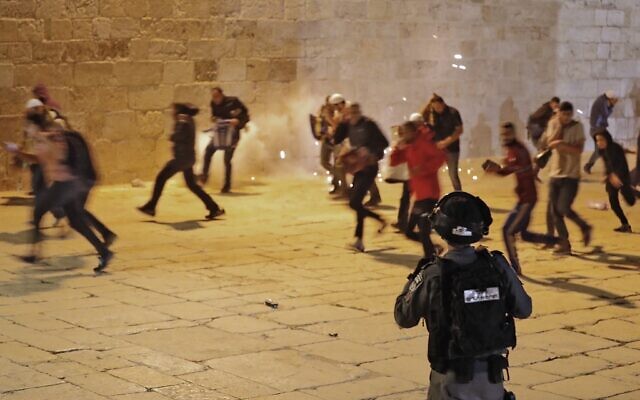 Palestinian protesters sprint away amid tear gas during clashes with Israeli security forces at the Temple Mount compound in Jerusalem, on May 7, 2021 (Ahmad GHARABLI / AFP)

The Israeli army was not involved in Friday’s events.

Israeli police burst into the Al-Aqsa compound on Friday evening after Palestinians threw rocks and bottles at officers, as widespread clashes in Jerusalem spread to the holy site following prayers held there on the last Friday of the Muslim holy month of Ramadan.

Police said 17 police officers were hurt and around half of those hospitalized, with one in moderate condition after taking a rock to the head. Meanwhile the Palestinian Red Crescent reported that at least 205 Palestinians were wounded in clashes throughout Jerusalem, mostly around the Temple Mount and by Damascus Gate. Eighty-eight Palestinians were hospitalized, mostly for injuries with rubber-coated steel bullets, it said.

Hamas leader Ismael Haniyeh said that Israel would “pay a price” for the clashes at the mosque, one of Islam’s holiest sites. The hilltop on which it sits is the holiest place in the world for Jews as the site of the two biblical temples — making it a flashpoint for nationalist sentiment and violence between Israelis and Palestinians.

“We tell [Israeli Prime Minister Benjamin] Netanyahu: don’t play with fire. This is a battle that you cannot win. Israeli arrogance and tyranny will be smashed on the stones of the Al-Aqsa Mosque,” Haniyeh said. 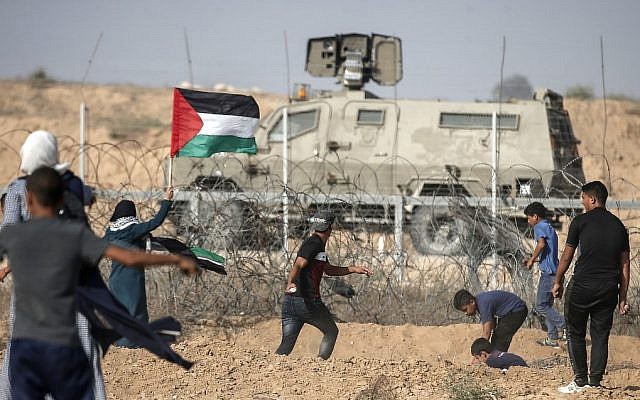 File: Palestinian demonstrators throw stones at Israeli security forces during protests along the border with Israel, east of Khan Younis, in the southern Gaza Strip on July 12, 2019. (MAHMUD HAMS / AFP)

“We hold the Israeli occupation government absolutely responsible for what is happening in the holy city in terms of dangerous developments, vicious aggression, and what may result from it,” Abbas said.

“The ruthlessness of the settlers only increases our insistence on claiming our legitimate rights: the end of the occupation, the achievement of independence and freedom, and the establishment of our sovereign, independent Palestinian state with its eternal capital Jerusalem,” Abbas added. 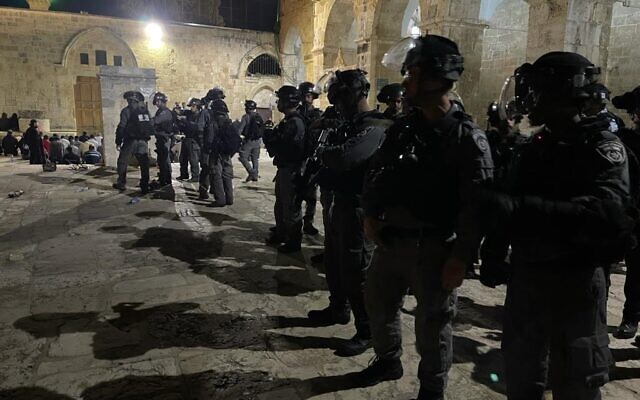 Israeli police on the Temple Mount in Jerusalem after riots broke out on May 7, 2021 (Israel Police)

After capturing East Jerusalem from Jordan in 1967, Israel continued to grant the Waqf, which is funded and controlled by the Jordanian government, near-complete control of the Al-Aqsa Mosque area.

Israeli security forces are present on the mount and work in coordination with the Waqf. Jews are allowed to visit the site, but unlike Muslims they are strictly prohibited from praying on the grounds.

In a statement Friday, the Jordanian Foreign Ministry called for Israel to immediately withdraw its forces from the Temple Mount.

Qatar, a key patron of Gaza’s Hamas rulers, also condemned what it called “an invasion” by Israeli forces in the Al-Aqsa Mosque area.

“This is a provocation to the feelings of millions of Muslims around the world,” the Qatari Foreign Ministry said in a statement. 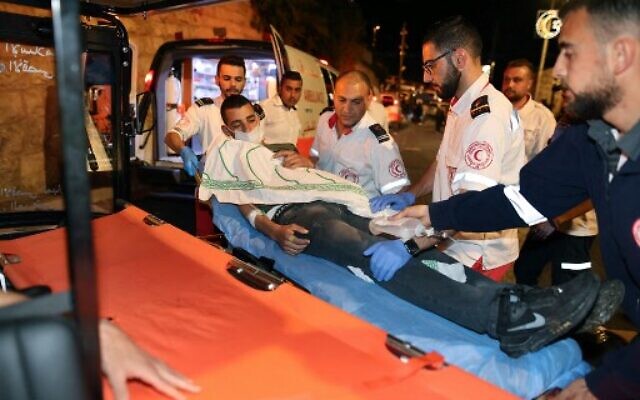 Palestinian medics transport a protester who was injured during clashes with Israeli police at the Temple Mount compound in Jerusalem, on May 7, 2021. (Photo by Ahmad Gharabli / AFP)

The United States said it was “extremely concerned” by the events in Jerusalem, calling on officials from all sides to deescalate the tensions.

The US State Department added that it was “deeply concerned” about the potential eviction of families from Sheikh Jarrah, as well as condemning Friday’s attack on soldiers by Palestinian gunmen as well as reciprocal so-called “price tag” attacks.

Tensions have been rising across Jerusalem, the West Bank and Gaza for the past several weeks. Israeli yeshiva student Yehuda Guetta was shot in a Palestinian terror attack in the West Bank earlier this week; he died of his wounds on Wednesday night.

A 16-year-old Palestinian teenager, Said Odeh, was shot and killed by Israeli forces near Nablus on Wednesday night, Palestinian health officials said. According to the Israeli military, Odeh was throwing Molotov cocktails at troops.

Earlier Friday, three Palestinian gunmen opened fire on Border Police troops in the northern West Bank. Two of them were killed in the firefight and a third was critically injured. Israeli military officials said the three were en route to carry out a “major” terrorist attack on civilians inside Israel.

In response, hundreds of Jewish extremists marched through Jerusalem’s downtown, chanting “Death to Arabs.” Others randomly attacked Palestinians across the city. This then led to severe clashes between police, Jews and Arabs in the city.

In recent days, Palestinians have held demonstrations in East Jerusalem’s Sheikh Jarrah neighborhood. Over 70 Palestinian residents are threatened with eviction and could be replaced by right-wing Jewish nationalists, in a legal battle being waged in the courts. 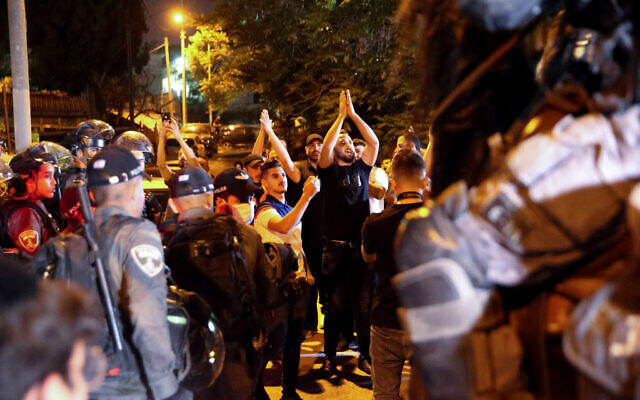 Israeli forces stands guard outside a home of a Jewish family during a protest against Israel’s plan to demolish some houses of Palestinians in the East Jerusalem neighborhood of Sheikh Jarrah on May 5, 2021. Photo by Jamal Awad/Flash90

On Wednesday, a spokesperson for Islamic Jihad’s armed wing called for Palestinians in Jerusalem and the West Bank to renew attacks against Israelis.

“Rebel against the Zionists, and renew the ramming operations and stabbing at checkpoints and shoot without hesitation in all the squares where the soldiers and settlers are present,” said Abu Hamza, a spokesperson for the terror group’s Al-Quds Brigades.

The United Nations urged Israel on Friday to call off any pending evictions in East Jerusalem, warning that its actions could amount to “war crimes.” Israel dismissed the tensions as a “real estate dispute.”

Abbas and Haniyeh both mentioned the planned eviction of Palestinian families in Sheikh Jarrah, a Palestinian neighborhood of East Jerusalem, as a key source of the spiraling tensions.

An Israeli court has ordered the families to leave, as the property was owned by a Jewish religious association before 1948. A 1970 Israeli law allows Jews to reclaim property in East Jerusalem from before it fell into Jordanian hands; no similar law exists for Palestinians.

Palestinians and their supporters have protested the pending evictions every night for the past week. Police have sought to disperse the protests with sound grenades and water cannons, leading to injuries and arrests.

The families have asked the Israeli Supreme Court to consider an appeal, which it is scheduled to do on Monday.

There are growing fears that tensions in Jerusalem could come to a head on Sunday night, Laylat al-Qadr, the most sacred night in the Muslim holy month of Ramadan. Worshipers will gather for nighttime prayers at Al-Aqsa Mosque.

Sunday night is also the start of Jerusalem Day, a national holiday in which Israel celebrates the unification of Jerusalem and religious nationalists hold parades and other celebrations in the city.