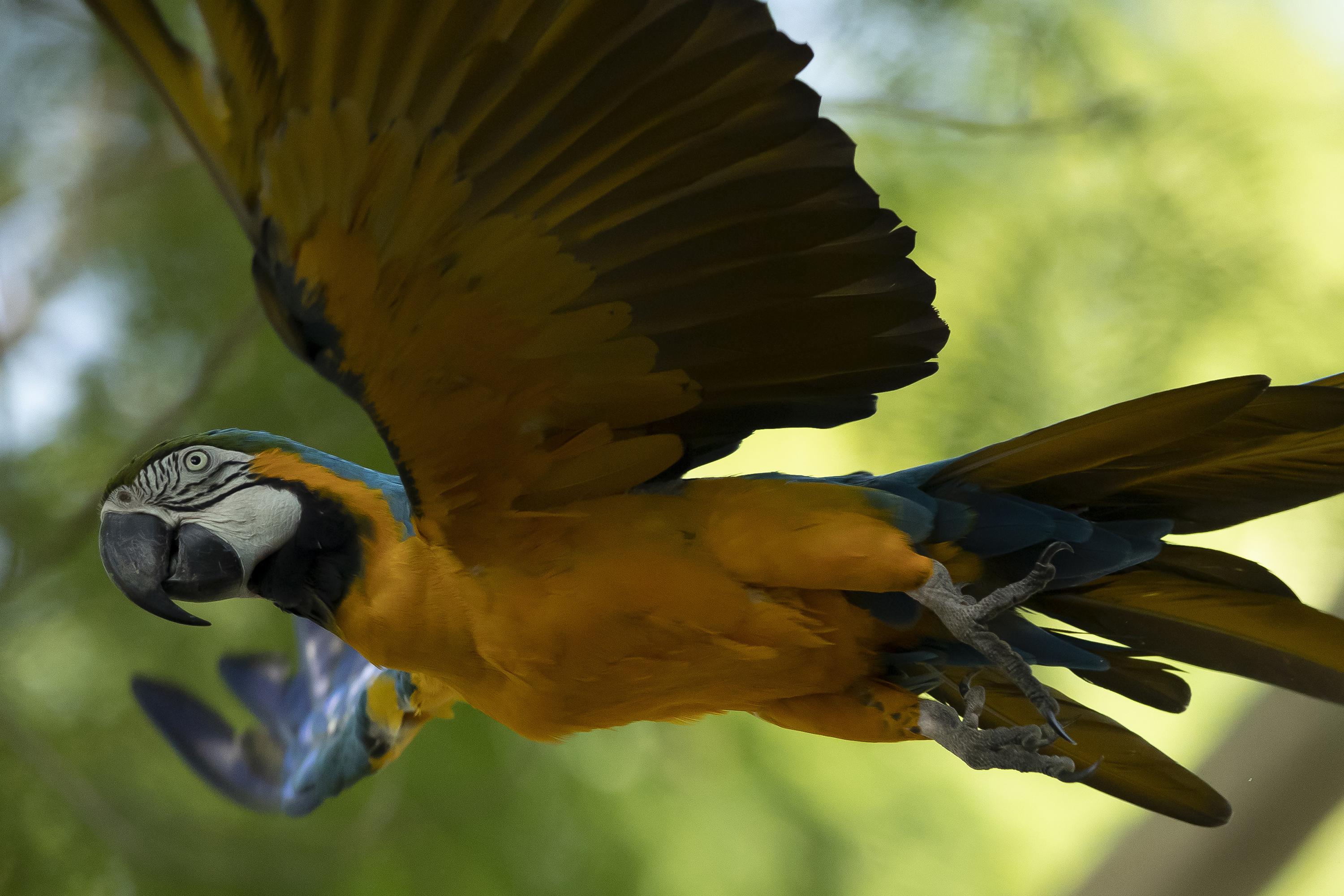 Last wild macaw in Rio is lonely and looking for love

Either way, a blue-and-yellow macaw that zookeepers named Juliet is believed to be the only wild bird of its kind left in the Brazilian city where the birds once flew far and wide.

Almost every morning for the last two decades, Juliet has appeared. She swoops onto the zoo enclosure where macaws are kept and, through its fence, engages in grooming behavior that looks like conjugal canoodling. Sometimes she just sits, relishing the presence of others. She is quieter — shier? more coy? — than her squawking chums.

Blue-and-yellow macaws live to be about 35 years old and Juliet — no spring chicken — should have found a lifelong mate years ago, according to Neiva Guedes, president of the Hyacinth Macaw Institute, an environmental group. But Juliet hasn’t coupled, built a nest or had chicks, so at most she’s “still just dating.”

“They’re social birds, and that means they don’t like to live alone, whether in nature or captivity. They need company,” said Guedes, who also coordinates a project that researches macaws in urban settings. Juliet “very probably feels lonely, and for that reason goes to the enclosure to communicate and interact.”

Aside from Juliet, the last sighting of a blue-and-yellow macaw flying free in Rio was in 1818 by an Austrian naturalist, according to Marcelo Rheingantz, a biologist at the Federal University of Rio de Janeiro, and there are no other types of macaws in the city. The lovebirds featured in the 2011 film “Rio″ are Spix’s macaws, which are native to a different region of Brazil and possibly extinct in the wild.

Being boisterous with brilliant plumage helps macaws find each other in dense forest, but also makes them easier targets for hunters and animal traffickers. They’re often seen in other Brazilian states and across the Amazon, and it is suspected Juliet escaped from captivity.

Biologists at BioParque aren’t sure if Juliet’s nuzzling is limited to one caged Romeo, or a few of them. They’re not even certain Juliet is female; macaw gender is near impossible to determine by sight, and requires either genetic testing of feathers or blood, or examination of the gonads.

Either would be interference merely to satisfy human curiosity with no scientific end, biologist Angelita Capobianco said inside the enclosure. Nor would they consider confining Juliet, who often soars overhead and appears well-nourished.

“We don’t want to project human feelings. I look at the animal, and see an animal at ease,” Capobianco said, noting Juliet has never exhibited behavior to indicate disturbance, such as insistently pecking at the fence.

“Who am I to decide it should only stay here? I won’t. It comes and goes, and its feathers are beautiful.”

After more than a year of COVID-19 quarantine and travel bans, the appeal of roaming without restriction is evident to humankind. Macaws are used to flying great distances of more than 30 kilometers (20 miles) a day, Guedes said.

Last year, BioParque g ave its macaws more space: a 1,000-square-meter (10,700-square-foot) aviary where they fly beside green parrots and golden parakeets to compose an aerial, technicolor swirl. It’s a massive upgrade from prior enclosures that were roughly 100 square feet. BioParque reopened to the public in March, after privatization of Rio’s dilapidated zoo and almost 17 months of renovations.

BioParque aims to feature species associated with research programs at universities and institutes. One such initiative is Refauna, which reintroduces species into protected areas with an eye on rebuilding ecosystems, and is participating with BioParque to start breeding blue-and-yellow macaws.

The plan is for parents to raise some 20 chicks that will receive training on forest food sources, the peril of predators and avoidance of power lines. Then the youngsters will be released into Rio’s immense Tijuca Forest National Park, where Juliet has been sighted and is thought to sleep each night.

“Their role could be important in terms of ecosystem and reforestation. It’s a big animal with big beak that can crack the biggest seeds, and not all birds can,” said Rheingantz, the university biologist, who is also Refauna’s technical coordinator. “The idea is for it to start dispersing those seeds, complementing forest animals that can’t.”

After some pandemic-induced delays, the project has slowly restarted and Rheingantz expects to release blue-and-yellow macaws into Tijuca park toward the end of 2022.

After two decades of relative solitude, Juliet will then have the chance to fly with friends. Neves said Juliet could teach them how to navigate the forest, or even find a love of her own.