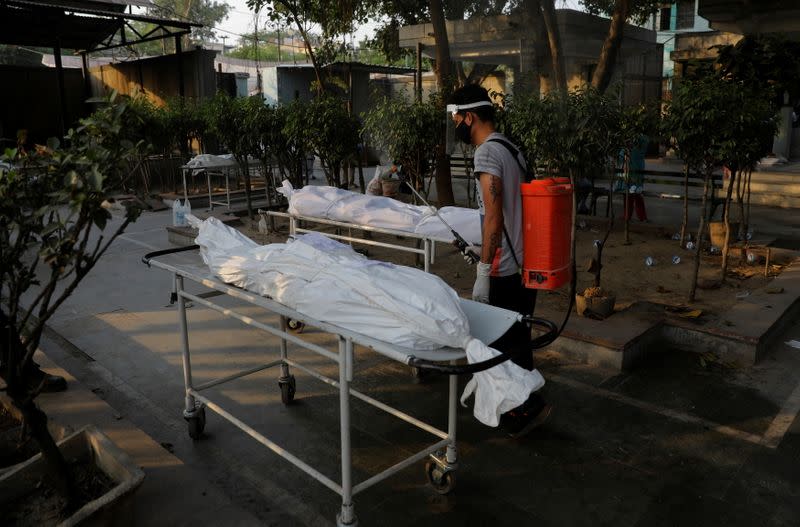 LUCKNOW, India (Reuters) -Scores of bodies are washing up on the banks of the Ganges as Indians fail to keep pace with the deaths and cremations of around 4,000 people a day from the novel coronavirus.

India currently accounts for one in three of the reported deaths from coronavirus around the world, according to a Reuters tally, and its health system is overwhelmed, despite donations of oxygen cylinders and other medical equipment from around the world.

Rural parts of India not only have more rudimentary healthcare, but are now also running short of wood for traditional Hindu cremations.

Authorities said on Tuesday they were investigating the discovery of scores of bodies found floating down the Ganges in two separate states.

“As of now it is very difficult for us to say where these dead bodies have come from,” said M P Singh, the top government official in Ghazipur district, in Uttar Pradesh.

Akhand Pratap, a local resident, said that “people are immersing bodies in the holy Ganges river instead of cremation because of shortage of cremation wood”.

Even in the capital, New Delhi, many COVID victims are abandoned by their relatives after cremation, leaving volunteers to wash the ashes, pray over them, and then take them to scatter into the river in the holy city of Haridwar, 180 km (110 miles) away.

“Our organisation collects these remains from all the crematoriums and performs the last rituals in Haridwar so that they can achieve salvation,” said Ashish Kashyap, a volunteer from the charity Shri Deodhan Sewa Samiti.

QUARTER OF A MILLION DEAD

The seven-day average of daily infections hit a record 390,995 on Tuesday, with 3,876 deaths, according to the health ministry.

Official COVID-19 deaths, which experts say are almost certainly under-reported, stand at just under a quarter of a million.

The World Health Organization said on Monday that it regarded the coronavirus variant first identified in India last year as a variant of global concern, with some preliminary studies showing that it spreads more easily.

Late that day, 11 people died in the government SVR Ruia hospital in the southern city of Tirupati because a tanker carrying oxygen arrived late.

“There were issues with oxygen pressure due to low availability. It all happened within a span of five minutes,” said M Harinarayan, the district’s senior civil servant.

Vaccines are also running short, especially in Maharashtra state around the financial centre of Mumbai, and in the capital, Delhi, two of India’s hardest-hit regions.

“We are ready to buy doses, but they are not available right now,” Maharashtra health minister Rajesh Tope told reporters.

India’s second wave of the pandemic has increased calls for a nationwide lockdown and prompted more and more states to impose tougher restrictions that have hurt businesses and the wider economy.

Production of the Apple iPhone 12 at a Foxconn factory in the southern state of Tamil Nadu has slumped by more than half because workers have been infected with COVID-19, two sources told Reuters.