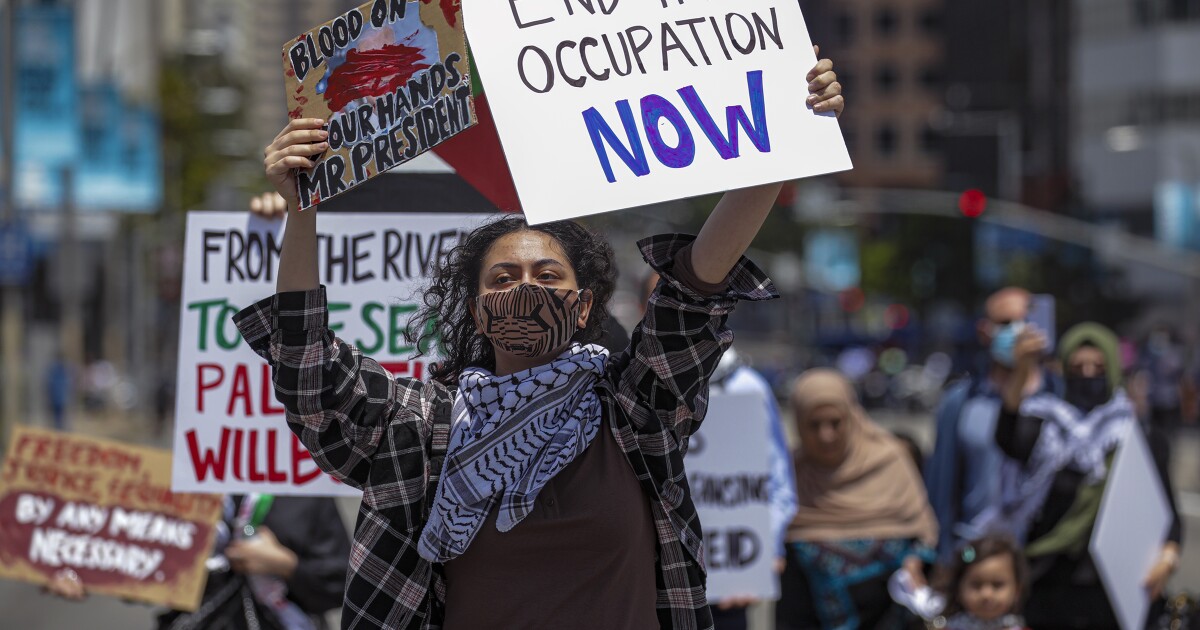 Thousands of protesters gathered in Westwood on Saturday to demonstrate support for Palestinians amid violence that has claimed a spiraling casualty toll in Gaza.

The march started around noon outside the Federal Building on Wilshire Boulevard and wound its way through area streets, clogging traffic.

No injuries were reported, and no arrests were made, said Officer Norma Eisenman of the Los Angeles Police Department.

The protest led to some traffic congestion, with the Police Department tweeting that people should avoid the area of Wilshire Boulevard near the 405 Freeway due to street closures.

The event was one of dozens staged across the country to mark the 73rd anniversary of what has come to be known as the “nakba,” or catastrophe, a reference to Palestinians’ displacement in the first Arab-Israeli war in 1948, organizers said in a statement.

“To this day, colonization and dispossession remain ongoing processes, where Palestinians continue to endure land theft and encroachments on their basic rights,” said the statement signed by dozens of groups, including the Palestinian Youth Movement, the Palestine Right to Return Coalition and the Free Democratic Palestine Movement.

The groups are calling on the U.S. government to stop providing military aid to Israel, remove the U.S. Embassy from Jerusalem and reverse former President Trump’s recognition of Jerusalem as Israel’s capital, the statement said.

President Biden has urged a de-escalation of the violence but has publicly backed Israel’s right to defend itself from Hamas rockets fired from Gaza. Since Monday night, Hamas has fired hundreds of rockets into Israel, which has pounded the Gaza Strip with strikes.

The outburst of violence has spread across the region, with Jewish-Arab fighting in mixed cities of Israel. There were also widespread Palestinian protests Friday in the occupied West Bank, where Israeli forces shot and killed 11 people.

On Saturday, an Israeli airstrike destroyed a high-rise building in Gaza City that housed offices of the Associated Press and other media outlets. Earlier in the day, an airstrike hit a three-story house in Gaza City’s Shati refugee camp, killing eight children and two women from an extended family.

U.S. diplomat Hady Amr arrived in the region Friday as part of Washington’s efforts to deescalate the conflict and the United Nations Security Council was set to meet Sunday.

Times photographer Irfan Khan and the Associated Press contributed to this report.