Thousands of people demonstrated in central Tel Aviv on Saturday night, calling for Jewish and Arab coexistence and a two-state solution to the Israeli-Palestinian conflict.

The rally followed the 11-day conflict between Israel and terror groups in the Gaza Strip, which sparked violent riots in Jewish-Arab cities within Israel, including communities long seen as models of coexistence. At least two Israelis were killed in the riots and several others were seriously injured by the mob violence.

Chanting “This is all of our homes,” “We stand together without hatred and without fear,” and “The answer to the Right is Israel and Palestine,” the demonstrators marched from Tel Aviv’s Rabin Square to the Habima Theater Square. There, the crowd heard speeches from two of the organizers of the demonstration, Itamar Avnery and Sally Abed, as well as author David Grossman and Joint List leader Ayman Odeh.

“We are the hostages of the various extremists. We sit with mouths agape and watch how human beings become targets, how mothers lie on top of their children on the street to protect them, how multistory buildings fall like a house of cards and whole families disappear in the blink of an eye,” said Grossman, whose son was killed in Second Lebanon War in 2006 during his military service. 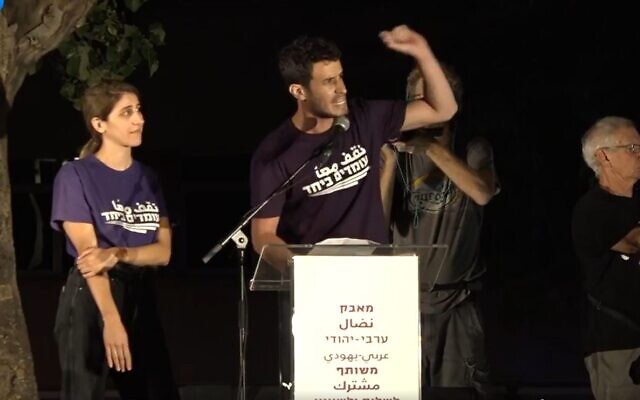 Sally Abed and Itamar Avnery spoke at a Jewish-Arab coexistence rally in Tel Aviv on May 22, 2021

Referring to the recent violence, Avnery, a Jewish Israeli, told the crowd to channel their feelings into activism.

“If the last two weeks were hard for you, if you felt despair, we are here to say, don’t despair, organize,” he said.

Sally Abed, who together with Avnery heads the organization “Omdim Beyachad” (We Stand Together), said Arabs and Jews should work together to create a more equal society.

“I am Sally, a Palestinian citizen of Israel. I refuse to return to the routine of institutional discrimination, of police violence and political arrests. I refuse to have second-class citizenship, and a racist government that is threatening all our lives for the benefit of an economic and settler elite. This government has no interest in serving our interests,” she said.

MK Ayman Odeh, chairman of the predominantly Arab Joint List party in the Knesset, said the rally gave him hope.

“People are speaking about the darkness that is descending on this country,” he said. “ I see light. I see a strong light. Jews and Arabs together will dispel the darkness. You are the light.” 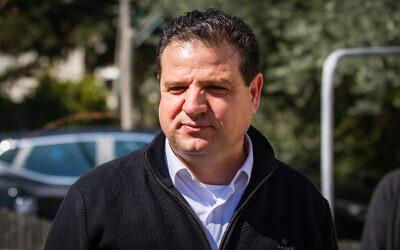 Joint List leader Ayman Odeh speaks to reporters outside his home in Haifa on March 3, 2020. (Flash90)

Odeh said that he does not accept the idea that nationalism is a zero-sum game.

“We do not accept the dichotomy of nationalism. Our path forward is together. Jews and Arabs together… There are two nations here. Both of them have a right to self-determination. Both deserve peace and equality. We respect the national identity of the Jews and the national identity of the Arabs, we respect both nations. We have a path forward,” he said.

‘Things can be different’

“We came to the demonstration to hear different voices from what is in the media, to see people who think like us,” said Vanessa, an Arab Israeli citizen who lives in Tel Aviv with her partner Issa.

Both Vanessa, who runs a clothing store and Issa, an engineering student at Tel Aviv University, are originally from Jaffa and said were shocked at the way police treated Arab residents of the city in recent days. 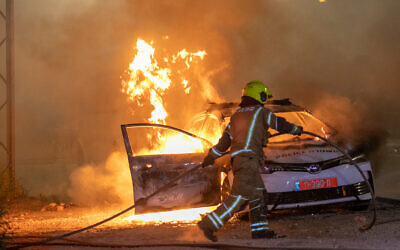 “We felt really helpless in the last two weeks. It hurt us to see the police against us, even though we are Israeli citizens,” said Vanessa.

“In Tel Aviv the police treat us with kid gloves, but in Jaffa they had their guns cocked,” said Issa, describing the behavior of the police as unprecedented.

“I think they were given an order from above,” he said.

Both said their greatest hope is for peace.

“I was afraid that all the progress we made over decades was finished, the dream of the common struggle of Jews and Arabs for peace, equality and justice,” said Biab, a former deputy mayor of Nazareth and former head of the Equality Department in the Histadrut Labor Union. 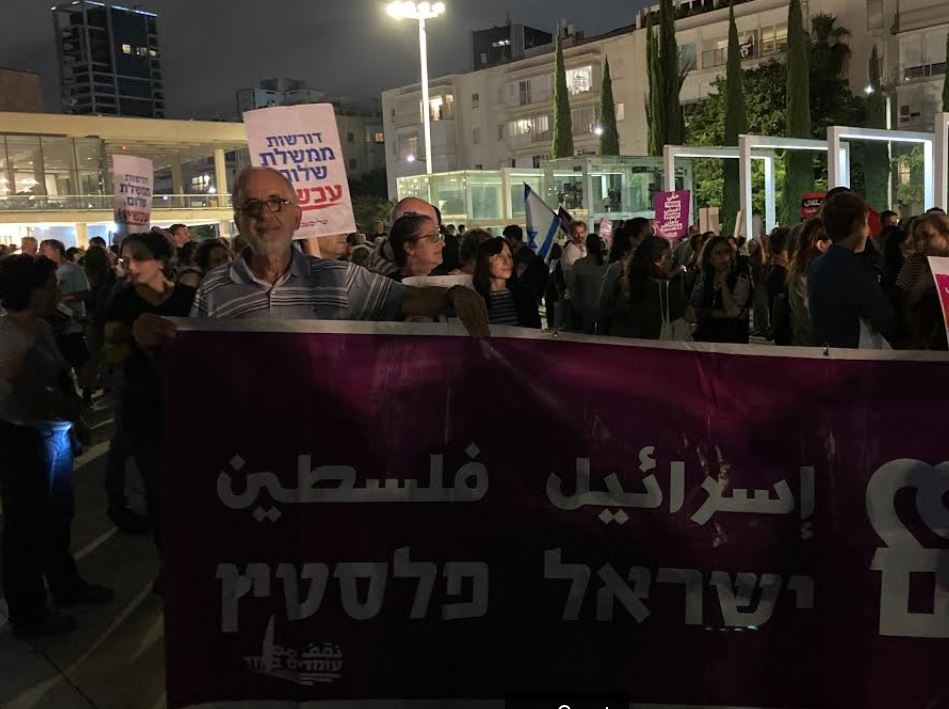 Saheil Biab, former deputy mayor of Nazareth, demonstrates for Jewish-Arab coexistence in Tel Aviv on May 22, 2021 (Simona Weinglass/Times of Israel)

“I was afraid that these fascist groups Lehava and Itamar Ben Gvir and La Familia would not let the two peoples coexist,” he said, referring to far-right Jewish activists involved in several of the violent riots.

Yonatan Hefetz, 36, a Jewish Israeli attended the demonstration with several friends who were alumni of the “Seeds of Peace” summer camp, which brings together Israeli and Arab teenagers at a camp in Maine.

He said he had been talking to friends in the West Bank, Jordan and Egypt over the last two weeks.

“We try to listen, there is a lot of anger. We try explain what is happening over here. I disagreed with some of the terms they were using like apartheid and ethnic cleansing. I think they’re using those words due to American influence. Those terms are coming from America.” 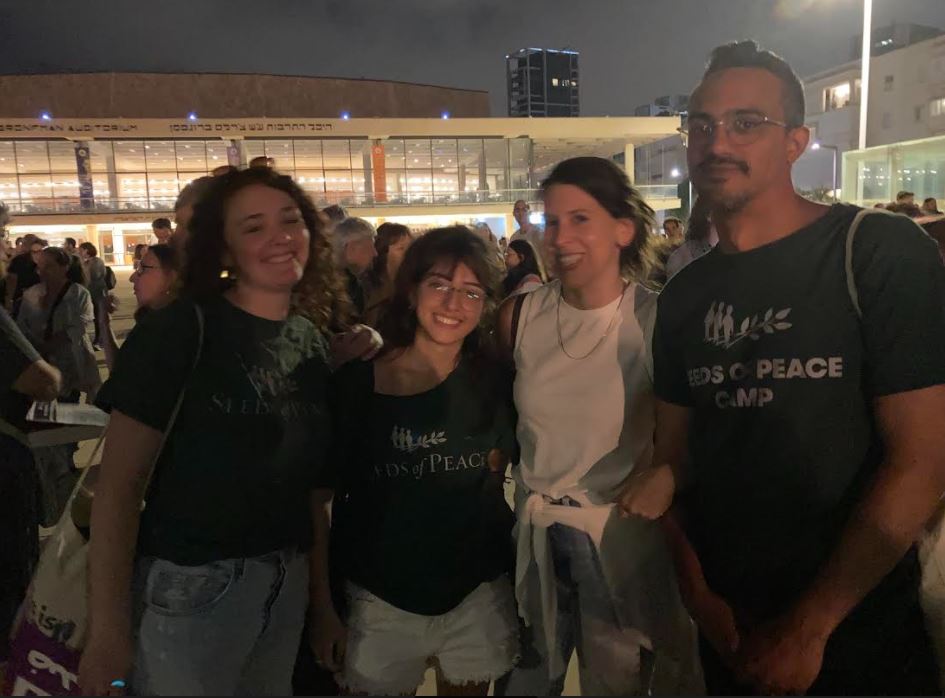 Jonathan Hefetz (r) and other alumni of the Seeds of Peace camp attend a demonstration for peaceful coexistence in Tel Aviv on May 22, 2021 (Simona Weinglass/Times of Israel)

Hefetz said that conversations with his Arab friends outside Israel have been emotionally loaded and that many of them are extremely angry.

“All these emotions, they cloud your rationality,” he said. “This is not about citizens, this is all political. It’s a fight between Hamas and a right-wing Israeli government. We came here to show solidarity and show that things can be different,” he said.

Sorgente articolo:
Dispel the darkness: Thousands of Jews, Arabs rally for coexistence in Tel Aviv – The Times of Israel