An Israeli civilian and a soldier were each moderately wounded in a stabbing attack near police headquarters in Jerusalem on Monday, Israeli authorities said.

The assailant was shot by officers at the scene, according to police. There was no announcement on his condition but photos showed a body being removed from the scene.

“Around 1:30 p.m., an assailant arrived at the light rail station, pulled out a knife and used it to injure two people there. Officers who were on the scene responded quickly, shooting the assailant and neutralizing him,” police said, without specifying if this meant the man had been killed or wounded.

The Israel Defense Forces described the stabbing as an apparent terror attack. 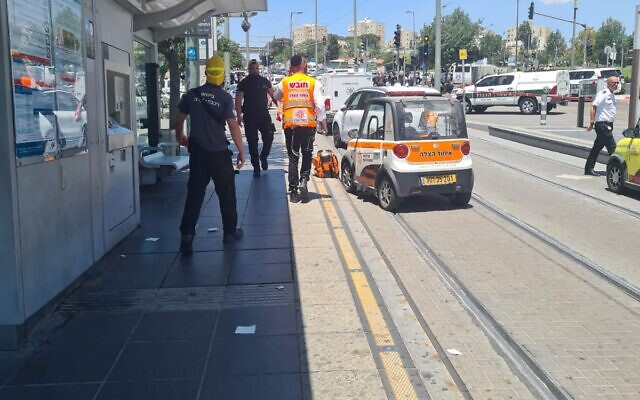 Medics arrive to the scene of an alleged stabbing attack at a light rail station in East Jerusalem on May 24, 2021. (United Hatzalah)

The assault occurred near the light rail station on Haim Bar-Lev Street in Jerusalem, near the Israel Police’s national headquarters in East Jerusalem, an area that has seen several terror attacks over the years.

Medics said the victims were young men, both in their early 20s. They were both taken to nearby Hadassah Hospital Mount Scopus for treatment.

The military later acknowledged that one of those injured was an IDF soldier.

Video footage from the scene showed the alleged assailant lying on the ground as police officers close off the area.

Recent weeks have seen a spike in attacks on Israeli security forces and civilians in the West Bank and Jerusalem, amid soaring tensions in the capital, as well as an 11-day conflict with terror groups in the Gaza Strip.