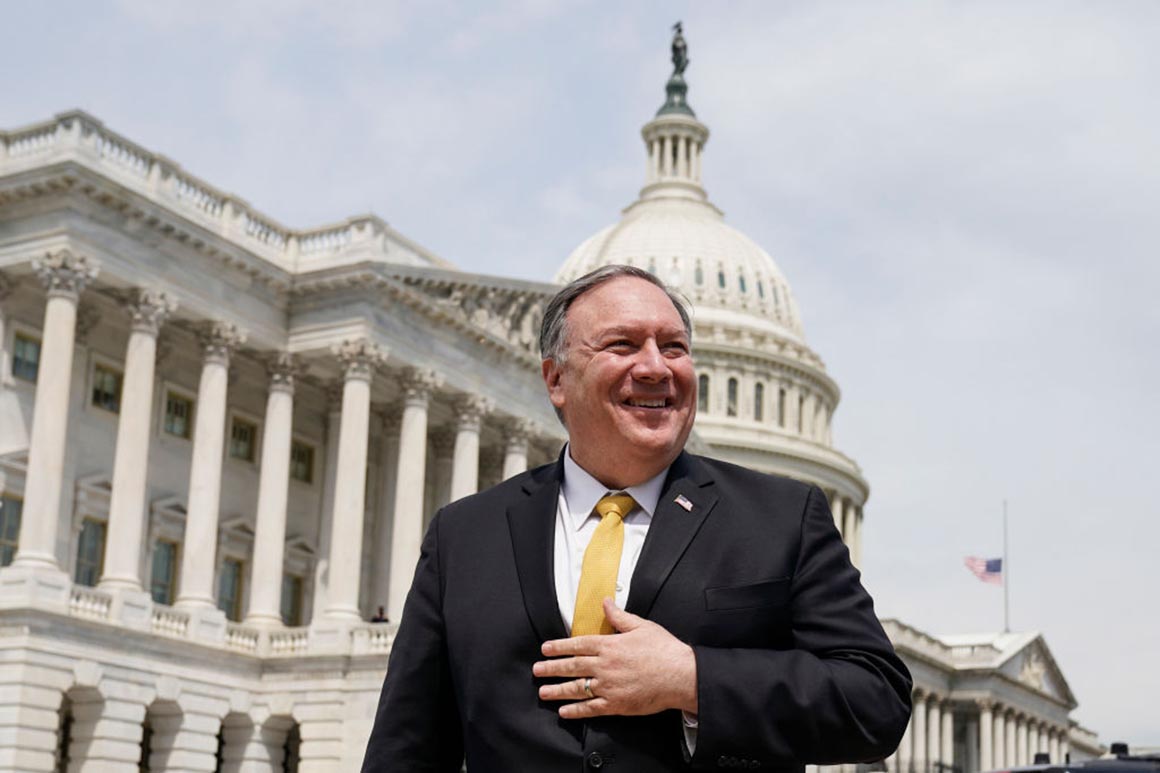 Pompeo may also meet privately with nongovernmental officials, according to the person, who added that Pompeo alerted Blinken of his plans.

The former secretary of State was a staunch defender of Israel during his time in office. Pompeo was America’s top diplomat during the negotiation of the Abraham Accords — bilateral deals that normalized relations between Israel and a number of Arab countries.

His stance toward Israel has sometimes generated controversy. Pompeo spoke to the 2020 Republican National Convention from Israel, a speech that drew complaints for violating the Hatch Act, which restricts political activity by sitting U.S. government officials. Pompeo said the speech was lawful.

A few days after the networks called the 2020 election for Biden, Pompeo visited an Israeli settlement in the West Bank — the first U.S. secretary of State to make such a trip. Much of the international community views these settlements as illegal and an obstacle to peace between Israelis and Palestinians.

Pompeo is seen as a likely 2024 Republican presidential candidate. Pro-Israel evangelicals will be a key voting bloc in the primary.

“The Israelis are simply trying to defend themselves,” Pompeo told Fox News last Tuesday. “Prime Minister Netanyahu is trying to defend Arabs and Jews and Christians and Muslims alike and he’s trying to make sure he doesn’t kill civilians. Israel has every right to do all that it needs to not only defend itself against the current rocket attacks but to make sure that that kind of attack can never happen again. They need to complete that mission. It’s absolutely essential for the security of Israel that they do so.”

Republicans, meanwhile, lambasted the Biden administration’s response to the conflict and accused the president of abandoning Israel.

Pompeo joined the chorus in saying that the Biden administration’s stance toward Israel was responsible for “inviting precisely the kinds of violence we are seeing in the region today.”

“Simple things like President Biden delaying his call with Israeli leadership and re-starting funding to the Palestinian Authority through the United Nations all tell Hamas and terrorists in the West Bank that America sees Hamas violence and Israeli demands for its own security as morally equal,” Pompeo wrote in an essay for the American Center for Law and Justice, where he is senior counsel for global affairs. “Team Biden appears to be placing less value on the relationship between Israel and the United States than even the Obama Administration did.”

In the wake of the violence, a number of Congressional Democrats lambasted the Israeli government’s response — a sign of rapid erosion of the longstanding bipartisan support the country has enjoyed in Washington. Sen. Chris Murphy, a Democrat on the Senate Foreign Relations Committee, called on the U.S. government to “draw a harder line with the Israeli government and demand that these settlements and these evictions and these displacements stop.”

In delicate diplomatic language, President Joe Biden said he supported a cease-fire on Monday, May 17. It took two more days for the White House, under increasing pressure to help bring an end to the violence, to release a readout of a call between the president and Israeli Prime Minister Benjamin Netanyahu that said Biden “conveyed to the Prime Minister that he expected a significant de-escalation today on the path to a ceasefire.”

On May 21 local time, Israel and Hamas — the Islamic militant group that controls Gaza — entered a cease-fire.