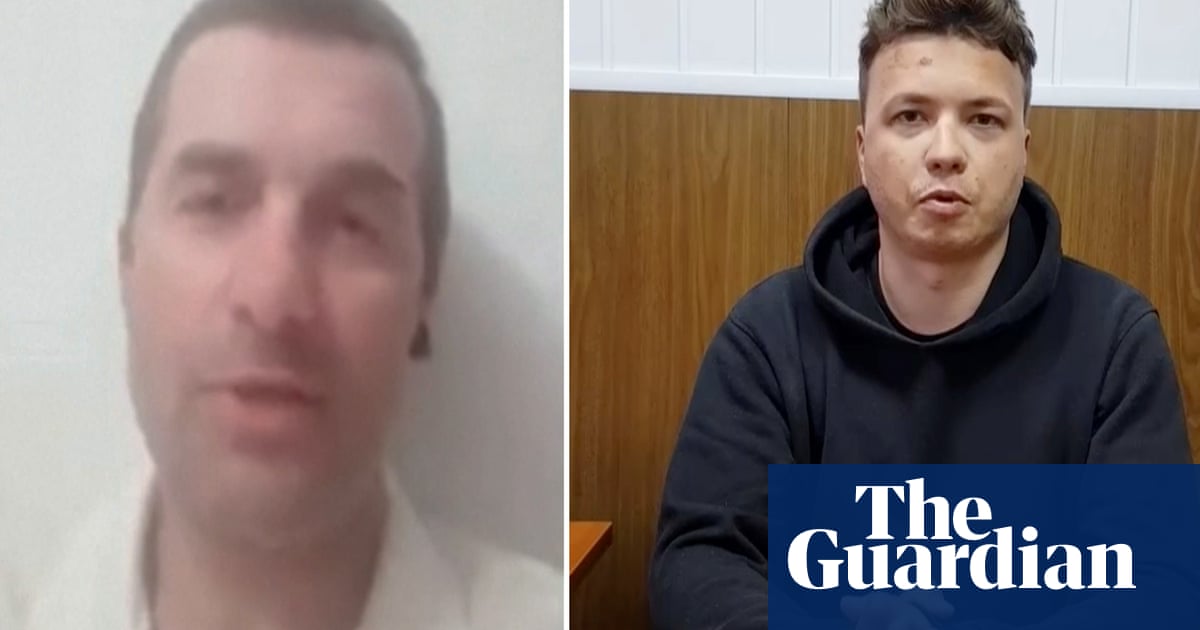 The father of the Belarusian journalist Raman Pratasevich said it was clear his son was acting under duress and had been beaten when he recorded a video “confessing” to organising mass protests against the regime.

Dmitry Pratasevich said Raman was “very nervous” and “spoke in a way that was unusual for him”.

“It’s clear that he was physically harmed because you can see signs of a beating on his face,” he added. He said his son also appeared to be missing some teeth.

It was obvious he was being forced to read out a statement, his father said, in which Raman claimed he was being treated correctly and was not suffering any health problems, following his arrest on Sunday.

“We still don’t know where he is, what his condition is, how he feels,” the father, who lives in Poland, told the news agency AFP.

Speaking on Tuesday, Belarus’s opposition leader, Sviatlana Tsikhanouskaya, said it was evident Pratasevich was acting “under pressure”. He faced torture from the authorities, she said, adding: “He’s been taken hostage in an act of state terrorism.”

Pratasevich, 26, was detained after Belarus’s president, Alexander Lukashenko, personally authorised the forced downing of his Ryanair flight travelling between Greece and Lithuania. His Russian girlfriend, Sofia Sapega, was also seized. Their whereabouts are unknown.

Tsikhanouskaya called on Tuesday for an international meeting to discuss Belarus and asked the British government to invite the country’s democratic forces to take part in next month’s G7 summit in Cornwall, hosted by Boris Johnson.

She urged the Biden administration to step up pressure on Lukashenko, in a call with the US national security adviser, Jake Sullivan. “It is down to the reaction from the west. We need sanctions and political isolation,” she said.

France’s president, Emmanuel Macron, has said he would like to invite Tsikhanouskaya to the G7 summit if Downing Street supported the move. “The president is in favour of that, if the British agree to it,” a French official said.

On Tuesday, however, the government said Tsikhanouskaya would not be invited to take part. A G7 spokesperson said there were “no current plans” to include “further national participants”. G7 leaders would discuss Belarus’ “reckless and dangerous behaviour” and “further sanctions for those responsible”, the cabinet office said.

EU leaders have promised fresh economic measures against Lukashenko’s government as well as a flight ban on the national carrier Belavia. The UK and EU have suspended flights into Belarus airspace, with most airlines skirting around it on the way to Moscow.

At home, Belarus has continued with repressive measures that have led to the arrests of 32,000 people since protests began last August after a presidential election Lukashenko allegedly rigged in his favour.

Seven Belarus activists were jailed on Tuesday for between seven and four years. They were found guilty of taking part in “mass unrest” following a closed-door trial in the eastern Mogilev region.

Paval Sieviaryniets, who co-chairs the Christian Democracy party, was arrested in June before the protests began. He was sentenced to seven years in prison. In court Sieviaryniets shouted “Belarus will be free” and broke into a defiant opposition chant: “We believe, we can, we will win.”

Fellow defendant Maxim Viniarski, a member of the European Belarus campaign, was sentenced to five years in prison. He had previously been jailed for protesting against the regime. His colleague Yauhen Afnahel, a veteran organiser and opposition coordinator, got seven years.

The Belarus authorities appear determined to stamp out all remaining dissent. On the day after Pratasevic’s Ryanair flight was intercepted, Lukashenko signed a new media decree that gave the state the power to block any media it deems threatening to “national values”. No foreign nationals can be involved in any media function, it says.

The government has to approve mass gatherings, livestreams by media and personal outlets from unsanctioned events are banned, and journalists are forbidden from taking part in “illegal” rallies, it adds. A new law also allows the blocking of 4G and internet.