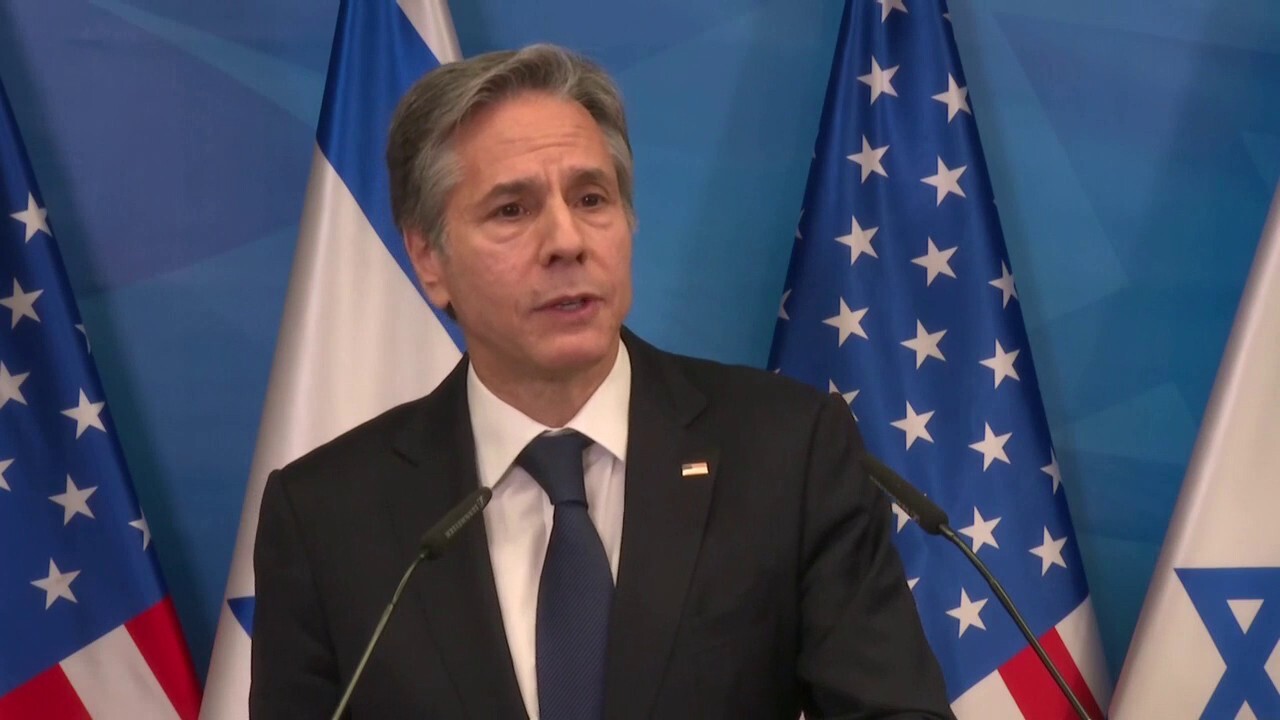 Secretary of State Antony Blinken on Tuesday announced a $112 million package of assistance for the Palestinians and other humanitarian projects in Gaza – part of a tour by Blinken of the region that has seen renewed conflict between the terrorist group Hamas and Israel in recent days.

“Across the meetings I’ve had so far, I’ve heard a shared recognition from all sides that steps need to be taken, work needs to be done, to address the underlying conditions that help fuel this latest conflict,” Blinken said at a news conference Tuesday evening local time.

NETANYAHU, IN FRONT OF BLINKEN, SAYS US SHOULD STAY AWAY FROM IRAN NUCLEAR DEAL

Meeting earlier in the day with Palestinian National Authority President Mahmoud Abbas, Blinken announced that the administration will notify Congress of its intention to provide $75 million in additional development and economic aid. In addition, it will fund disaster assistance in Gaza to the tune of $5.5 million, and an additional $32 million to the controversial U.N. Palestinian refugee agency’s (UNRWA) emergency humanitarian appeal.

“This new assistance comes on top of significant support the United States has recently committed and resumed to the Palestinian Authority, the Palestinians, to different agencies and groups,” Blinken said. “In total, we are in the process of providing more than $360 million in urgent support for the Palestinian people.”

However, he emphasized that rebuilding Gaza only makes sense “if there is confidence that what is rebuilt is not lost again because Hamas decides to launch more rocket attacks in the future.”

Blinken also announced that the U.S. would reopen its consulate general in Jerusalem, which had been downgraded by the Trump administration.

“As I told the president, I’m here to underscore the commitment of the United States to rebuilding the relationship with the Palestinian Authority and the Palestinian people, a relationship built on mutual respect and also a shared conviction that Palestinians and Israelis alike deserve equal measures of security, freedom, opportunity and dignity,” he said.

Blinken met with both Palestinian and Israeli officials after an 11-day conflict that began when Hamas, a terror group that does not recognize Israel’s right to exist, launched rockets at Israel – which in turn responded with airstrikes.

The Biden administration initially took a strong stance of support for Israel and has blocked U.N. Security Council resolutions that would condemn Israel. Biden has faced pressure from the progressive left wing of his party, which has accused Israel of disproportionate force and civilian deaths. Biden subsequently pushed Israeli Prime Minister Benjamin Netanyahu for a cease-fire.

Meeting with Netanyahu on Tuesday, Blinken reaffirmed support of Israel but also said the U.S. would still seek to re-enter the Iran nuclear deal – from which the Trump administration withdrew and that Netanyahu has warned the U.S. against re-entering.

“We had a detailed discussion about Israel’s security needs, including replenishing Iron Dome,” Blinken said. “We’ll continue to strengthen all aspects of our long-standing partnership. And that includes consulting closely with Israel, as we did today, on the ongoing negotiations in Vienna around a potential return to the Iran nuclear agreement, at the same time as we continue to work together to counter Iran’s destabilizing actions in the region.”

At his news conference later in the day, Blinken said the reconstruction effort in Gaza, if successful, would undermine rather than strengthen Hamas

“I say that because Hamas thrives, unfortunately, on despair, on misery, on desperation, on a lack of opportunity – in fact, it is a movement that has thrived on a vacuum of opportunity,” he said.

Fox News’ Tyler Olson and the Associated Press contributed to this report.