The Israel Defense Forces on Tuesday confirmed accidentally downing one of its own drones in the recent fighting against Hamas in the Gaza Strip.

The military said the small reconnaissance drone, known as a Skylark, was hit with an interceptor from the Iron Dome missile defense system.

The incident is being investigated, the IDF added, without giving further details.

According to the Haaretz daily, which first reported the drone’s downing, the incident was causing concern in the Israeli Air Force, noting its need for the country’s air defense to be able to identify enemy aircraft and down them.

The report, which did not cite a source, said the Iron Dome’s ability to differentiate between hostile and non-hostile aircraft was the main reason an international aviation authority gave Israel the green light to keep its airspace open to commercial flights during the fighting. 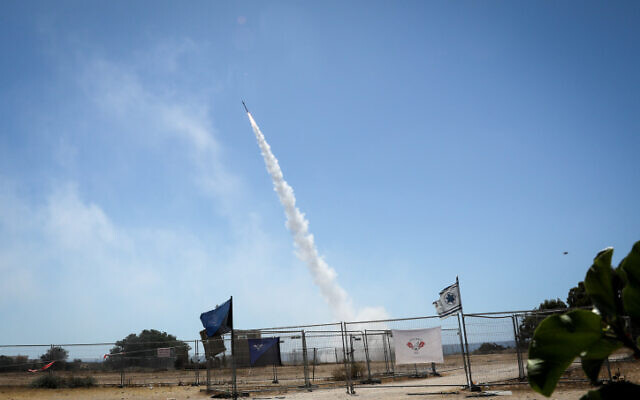 The Iron Dome anti-missile system fires interceptor missiles at rockets fired from the Gaza Strip to Israel, in the southern city of Ashkelon, May 19, 2021 (Olivier Fitoussi/Flash90)

During Operation Guardian of the Walls — the IDF’s name for the 11 days of hostilities that began on May 10, after Hamas fired rockets at Jerusalem amid escalating Israeli-Palestinian tensions over the city — the military intercepted a number of drones launched toward Israel by the Gaza-ruling terror group.

In this month’s fighting, Hamas and other terror groups fired more than 4,300 rockets toward Israel while the Israel Defense Forces responded with roughly 1,500 airstrikes against targets in Gaza.

According to the Hamas-run Health Ministry in Gaza at least 243 Palestinians were killed, including 66 children and teens, with 1,910 people wounded. It does not differentiate between terror group members and civilians. The Israeli military maintained that it killed some 225 terrorist operatives and that the Palestinian death toll was in fact considerably higher than was reported. It said some of the civilian fatalities were caused by Hamas rockets falling short and landing in the Strip.

Thirteen people were killed in Israel, all but one of them civilians, including a 5-year-old boy and a 16-year-old girl.