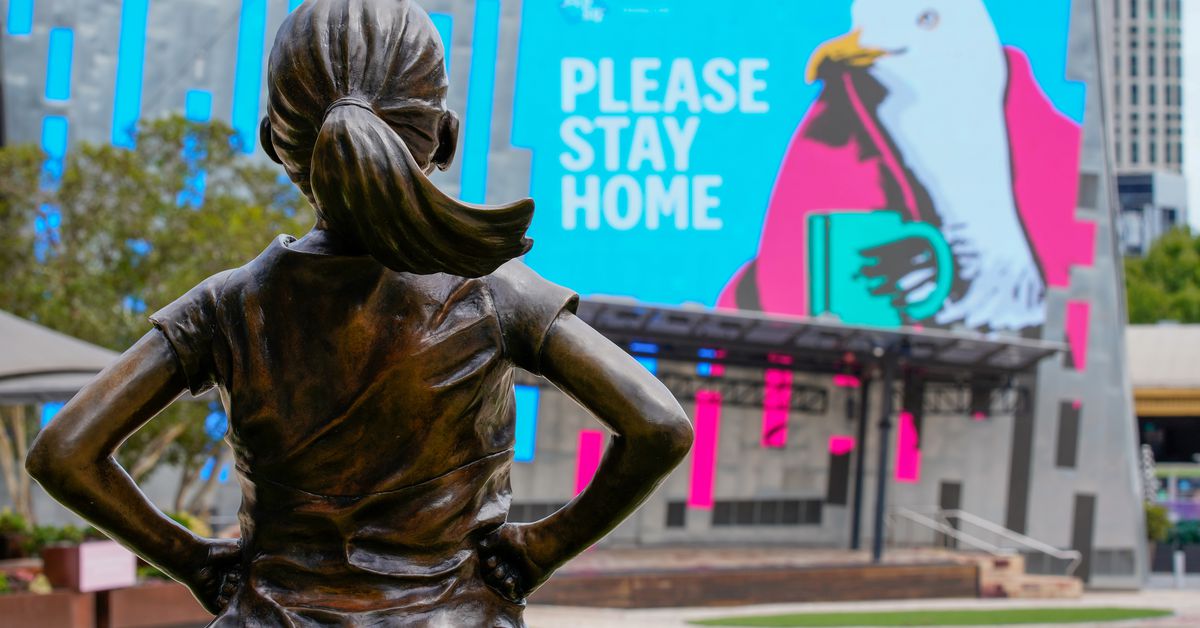 The Fearless Girl Statue looks at a “Please Stay Home” sign in an empty Federation Square on the first day of a five-day lockdown implemented in the state of Victoria in response to the coronavirus disease (COVID-19) outbreak in Melbourne, Australia, February 13, 2021. REUTERS/Sandra Sanders/Files/File Photo

Australia’s second largest city Melbourne reinstated COVID-19 restrictions on Tuesday as authorities scrambled to find the missing link in a fresh outbreak, prompting New Zealand to pause a “travel bubble” with the state of Victoria.

Amid worries the cluster, which has grown to nine cases in two days, could spark a major outbreak, Victoria imposed social restrictions and made face masks mandatory in hotels, restaurants, and other indoor venues from 6 p.m. (0800 GMT) on Tuesday until June 4.

Australia has avoided the high COVID-19 numbers seen in many developed countries by closing its international borders in the early stages of the pandemic and with lockdowns. It has reported just over 30,000 cases and 910 deaths.

Thousands of people in Melbourne have been ordered to self isolate and undergo COVID-19 tests with health alerts issued for several sites, including one of the largest shopping centres in the country.

One of the cases had a high viral load while he visited some venues prompting authorities to warn Melbourne’s five million residents to brace for more positive cases in the next few days.

Authorities urged Victorians to get vaccinated.

Victoria was the hardest-hit state during a second wave late last year, accounting for about 70% of total cases and 90% of deaths in Australia. The state, the country’s second most populous, only controlled the outbreak after one of the world’s longest and strictest lockdowns.

Five new locally acquired cases were reported in Victoria on Tuesday, a day after four infections were recorded in Melbourne.

All cases belong to one extended family across different households and could be traced back to the variant found in an overseas traveller who returned to Melbourne early this month after completing quarantine in the city of Adelaide.

Authorities, however, said they could not yet find how the latest cases contracted the virus from the overseas traveller.

“New Zealand officials have assessed that the most cautious option is to pause the travel bubble with Victoria as there are still several unknowns with the outbreak,” Hipkins said.

Melbourne’s fresh outbreak comes as Australian authorities try to ramp up a sluggish national vaccination drive with health experts worried many people were delaying getting inoculated because of the country’s success in effectively eliminating the virus.

(This story refiles to remove extra words in headline.)