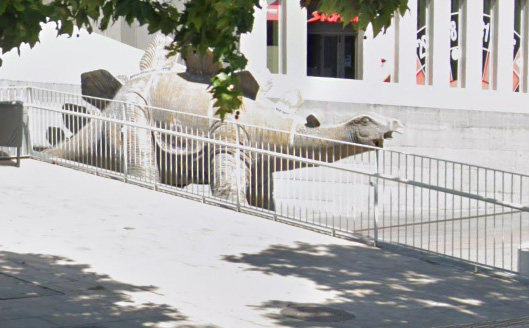 A man reported missing by his family was found dead inside a dinosaur statue on a Spanish street, police say.

It is thought that he became stuck while trying to retrieve a mobile phone.

The Spanish news site El Mirall said that a father and son had reported something suspicious around noon Saturday after they examined the stegosaur statue in Santa Coloma de Gramenet, a suburb of Barcelona.

“We found the body of a man inside the leg of this dinosaur statue. It’s an accidental death,” a police spokeswoman told the Guardian.

She said it looked as if the 39-year-old man had gone head-first through a hole in the statue’s belly to retrieve a phone that had fallen into a hind leg. There he apparently got stuck. “It seems he was there for a couple of days,” the police spokeswoman said.

The man had been reported missing by his family on Saturday morning.

The 9-foot-tall dinosaur, in a state of disrepair, was what remained of a display advertising a now-defunct cinema.
Sorgente articolo:
Missing man found dead inside dinosaur statue – The Mercury News