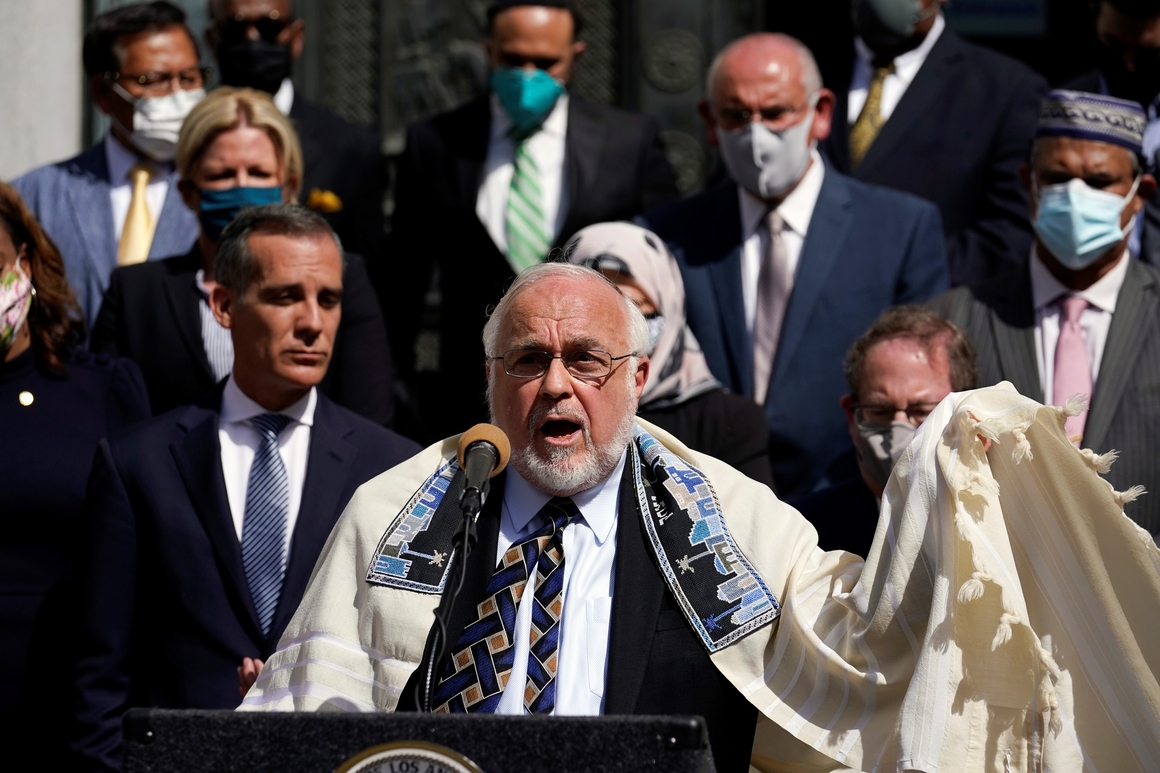 While fighting in the Middle East has ceased, the GOP is facing a fresh political headache of its own this week after Rep. Marjorie Taylor Greene (R-Ga.) refused to back down on her comparisons of mask requirements by House Democratic leaders to the persecution of Jews during the Holocaust. Greene went further with a tweet on Tuesday morning comparing vaccination efforts to the Holocaust: “Vaccinated employees get a vaccination logo just like the Nazi’s forced Jewish people to wear a gold star.”

Her initial comments were denounced by a few Republicans who had broken from their party over the impeachment of former President Donald Trump, but Greene’s Tuesday doubling-down drew criticism from House Minority Leader Kevin McCarthy.

“Marjorie is wrong, and her intentional decision to compare the horrors of the Holocaust with wearing masks is appalling,” McCarthy said in a statement. “The Holocaust is the greatest atrocity committed in history. The fact that this needs to be stated today is deeply troubling.”

The California Republican also sought to put the onus for rising antisemitism on his political opponents. “At a time when the Jewish people face increased violence and threats, antisemitism is on the rise in the Democrat Party and is completely ignored by Speaker Nancy Pelosi,” McCarthy said.

Lauren Fine, spokesperson for House Minority Whip Steve Scalise, said the Louisiana Republican “does not agree with these comments and condemns these comparisons to the Holocaust.” She added a similar rejoinder to McCarthy’s: “We also need to be speaking out strongly against the dangerous antisemitism that is growing in our streets and in the Democrat Party, resulting in an alarming number of horrific violent attacks against Jews.”

As temperatures rose on Capitol Hill, lawmakers in both parties lamented that the long-intractable Middle East crisis had bled into the seemingly universal fight against antisemitism.

Sen. Jacky Rosen (D-Nev.), who is Jewish, said she thought the rhetoric regarding the most recent conflict contributed to the current increase in antisemitic incidents, adding that she was “upset and discouraged” by what’s resulted.

Biden has been “doing everything he can diplomatically,” Rosen said of the shooting war between Israel and Hamas, but the “rise in antisemitic violence has to stop. And so we have to be very vigilant to figure out what to do about that moving forward.”

Rosen co-chairs the bipartisan Senate Task Force for Combating Anti-Semitism and has been outspoken about attacks motivated by discrimination against Jews. The president and his top deputies have vocally condemned the rise in antisemitic violence. And on the GOP side, Senate Minority Leader Mitch McConnell and Sen. Tom Cotton (R-Ark.) are set to introduce a bill this week to address the rise in antisemitic hate crimes.

Democrats have long underscored that their criticisms for Netanyahu’s government — which some progressives have described as an “apartheid” regime — should not be mistaken for antisemitism or even a lack of support for Israel’s sovereignty. They have pointed to recent actions including the possible evictions of Palestinians from the Sheikh Jarrah neighborhood in east Jerusalem to support their view that the U.S. should not be funding what they see as human rights violations.

Sophie Ellman-Golan, director of strategic communications for Jews for Racial & Economic Justice, said the ascendancy of the Jewish left was drawing a firmer distinction between alignment with the Israeli government and alignment with the interests of American Jews.

“For a long time, pro-Israel politicians and advocacy groups have spoken about Jews in the diaspora and the state of Israel as if we are one and the same,” she said. “We aren’t, and the increased visibility of the Jewish left is making it harder for people to claim otherwise.”

Some of the most vocal liberal critics of the Israeli government, like Rep. Alexandria Ocasio-Cortez (D-N.Y.), have spoken out against the recent spate of antisemitic attacks while also condemning the actions of the Israeli government. But that willingness of pro-Palestinian progressives to condemn antisemitism hasn’t stopped some more moderate Democrats from pushing liberals to do more on behalf of American Jews.

“I’ll say the quiet part out loud; it’s time for ‘progressives’ to start condemning anti-semitism and violent attacks on Jewish people with the same intention and vigor demonstrated in other areas of activism,” Rep. Dean Phillips, who is Jewish, (D-Minn.) wrote on Twitter. “The silence has been deafening.”

While Greene attracted outsized attention inside the Beltway, American Jewish advocates described her as an outlier and urged lawmakers to keep their focus on concrete actions to combat antisemitism.

“It’s just the latest manifestation of her mania, her lunacy. The reality is on the ground in public places, the Jewish community is worried about their own literal physical safety and security — and that’s what we need to keep focused on,” said Jonathan Greenblatt, the ADL’s CEO.

U.S. Jewish groups are calling for steps to stem the violence like increased security at synagogues and actions to curb a rise in white supremacy. The COVID-19 Hate Crimes Act, which Biden signed into law last week, included provisions to improve hate crime reporting at the state and local level long sought by civil rights groups, though the lack of uniformity among state-level hate crimes statutes has hampered data collection.

Sen. Mazie Hirono (D-Hawaii), who helped shepherd the legislation through Congress, said “there’s no reason why [antisemitic hate crimes] wouldn’t be” covered by her measure — which was inspired by a rise in attacks against Asian Americans during the coronavirus pandemic and amended to include additional anti-hate crime provisions.

Others just want cooler heads to prevail amid the inflammatory rhetoric.

Sen. Jon Ossoff (D-Ga.), who is Jewish, declined to link the antisemitic incidents to the Gaza conflict without talking to experts or learning more about the incidents. Ossoff said he was “deeply pained” by the increase and added: “For too long, there have not been serious efforts made to resolve the conflict between Israel and Palestinian factions.”

Joel Rubin, the executive director of the American Jewish Congress, said there was a “broad middle of American Jews” who wanted to see peace in the Middle East but were “incredibly dismayed” by the language that had entered American politics, and “that has to be turned around.”