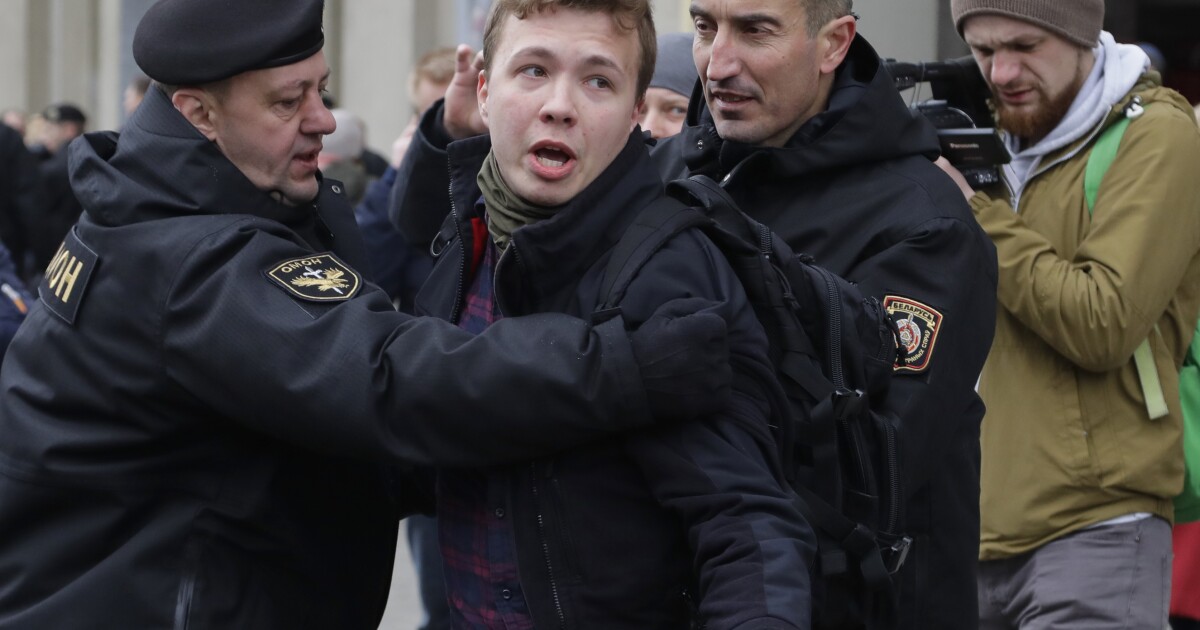 The European Union agreed Monday to impose sanctions on Belarus, including banning its airlines from using the airspace and airports of the 27-nation bloc, amid fury over the forced diversion of a passenger jet to arrest an opposition journalist.

Reacting to what EU leaders called a brazen “hijacking” of the Ryanair jetliner flying from Greece to Lithuania on Sunday, they also demanded the immediate release of the journalist, Roman Protasevich, a key foe of authoritarian Belarusian President Alexander Lukashenko.

“We won’t tolerate that one can try to play Russian roulette with the lives of innocent civilians,” said EU Council chief Charles Michel, who presided over the EU meeting.

A brief video of Protasevich, who ran a popular messaging app that played a key role in helping organize huge protests against Lukashenko, was shown on Belarusian state television Monday night, a day after he was removed from the Ryanair flight.

Sitting at a table with his hands folded in front of him and speaking rapidly, Protasevich said he was in satisfactory health and said his treatment in custody was “maximally correct and according to law.” He added that he was giving evidence to investigators about organizing mass disturbances.

In their unusually swift action in Brussels, the EU leaders also urged all EU-based carriers to avoid flying over Belarus, decided to impose sanctions on officials linked to Sunday’s flight diversion, and urged the International Civil Aviation Organization to start an investigation into what they viewed as an unprecedented move and what some said amounted to state terrorism or piracy.

The leaders called on their council “to adopt the necessary measures to ban overflight of EU airspace by Belarusian airlines and prevent access to EU airports of flights operated by such airlines.” In addition to calling for the release of Protasevich, they also urged authorities in Minsk to free his Russian girlfriend, Sofia Sapega, who was taken off the plane with him.

The text was endorsed quickly by the leaders who were determined to respond with a “strong reaction” to the incident because of the “serious endangering of aviation safety and passengers on board by Belarusian authorities,” said an EU official with direct knowledge of the discussions who was not authorized to speak publicly about the private talks.

At least one European airline already diverted a flight around Belarus. British Airways Flight 3599, which on Saturday and Sunday crossed over Belarus, bypassed the country Monday by using Russian airspace instead, according to the website Flightradar24.

Ryanair said Belarusian flight controllers told the crew there was a bomb threat against the plane as it was crossing through Belarus airspace Sunday and ordered it to land. A Belarusian MIG-29 fighter jet was scrambled to escort the plane in a brazen show of force by Lukashenko, who has ruled the country with an iron fist for over a quarter-century.

Belarus authorities then arrested the 26-year-old activist, journalist and prominent Lukashenko critic. Protasevich and his Russian girlfriend were taken off the plane shortly after it landed, and authorities haven’t said where they’re being held. Ryanair Flight FR4978, which began in Athens, was eventually allowed to continue on to Vilnius, Lithuania.

Von der Leyen added that a $3.7 billion EU investment and economic package for Belarus will remain on hold until Belarus “turns democratic.”

U.S. President Biden said late Monday that he asked his team to develop appropriate options to hold accountable those responsible, in close coordination with the European Union, other allies and partners, and international organizations.

“This outrageous incident and the video Mr. Protasevich appears to have made under duress are shameful assaults on both political dissent and the freedom of the press. The United States joins countries around the world in calling for his release, as well as for the release of the hundreds of political prisoners who are being unjustly detained by the Lukashenka regime,” Biden’s statement said.

Two U.S. senators urged the Biden administration to prohibit U.S. airlines to enter Belarus airspace because of the incident. “We must protect innocent passengers from despotic regimes and stand in solidarity with dissidents who are being targeted,” Sens. Richard J. Durbin, a Democrat from Illinois, and Marco Rubio, a Florida Republican, said in a joint statement.

EU leaders were particularly forceful in their condemnation of the arrest and the move against the plane, which was flying between two of the bloc’s member nations and was being operated by an airline based in Ireland, also a member.

EU leaders have tried to bring Belarus closer to the bloc — to encourage democratic reforms and reduce the influence of Russia — but have failed so far.

British Transport Secretary Grant Shapps said he instructed the U.K. Civil Aviation Authority “to request airlines avoid Belarusian airspace in order to keep passengers safe.” He added that he was suspending the permit allowing Belarusian state-owned Belavia to operate in the U.K.

Ukraine President Volodymyr Zelensky ordered officials to move to cut the air link with Belarus and ban Ukrainian flights via the neighbor’s airspace.

The U.S. and the EU have imposed sanctions on top Belarusian officials amid months of protests, which were triggered by Lukashenko’s reelection to a sixth term in an August 2020 vote that the opposition rejected as rigged. More than 34,000 people have been arrested in Belarus since then, and thousands beaten.

The Belarusian Foreign Ministry bristled at what it described as “belligerent” EU statements, insisting Minsk acted “in full conformity with international rules.”

It ordered all Latvian diplomats out of the country after the Belarusian flag was replaced Monday with the white-and-red one used by the opposition at the world ice hockey championship in Riga, Latvia. The event was moved from Minsk amid the international outcry over the crackdown.

Lufthansa said a flight from Minsk to Frankfurt, Germany, with 51 people aboard was delayed Monday following a “security warning.” It was allowed to depart after the plane, passengers and cargo were searched.

On Sunday, flight tracker sites indicated the Ryanair flight was about six miles from the Lithuanian border when it was diverted. There were conflicting reports on what exactly happened.

But Ryanair said in a statement that Belarusian air traffic control instructed the plane to divert to the capital. The plane was searched, and no bomb was found. Ryanair CEO Michael O’Leary described the move as “a case of state-sponsored hijacking … state-sponsored piracy.”

Passengers described Protasevich’s shock when he realized the plane was going to Minsk.

“He freaked out when the pilot said the plane is diverted to Minsk. He said there’s death penalty awaiting him there,” passenger Marius Rutkauskas said after the plane finally arrived in Vilnius.

Protasevich was a co-founder of the Telegram messaging app’s Nexta channel, which played a prominent role in helping organize the anti-Lukashenko protests. Nearly 2 million Belarusians in the nation of 9.3 million people have followed the channel. Belarus authorities have labeled the channel “extremist” and charged Protasevich in absentia of inciting mass riots and fanning social hatred. He could face 15 years in prison.

Amid the international outrage, Moscow quickly offered a helping hand to its ally.

Russian Foreign Minister Sergei Lavrov said the episode needs to be investigated — but that it couldn’t be rushed. Moscow and Minsk have close political, economic and military ties, and Lukashenko has relied on Russian support amid Western sanctions.