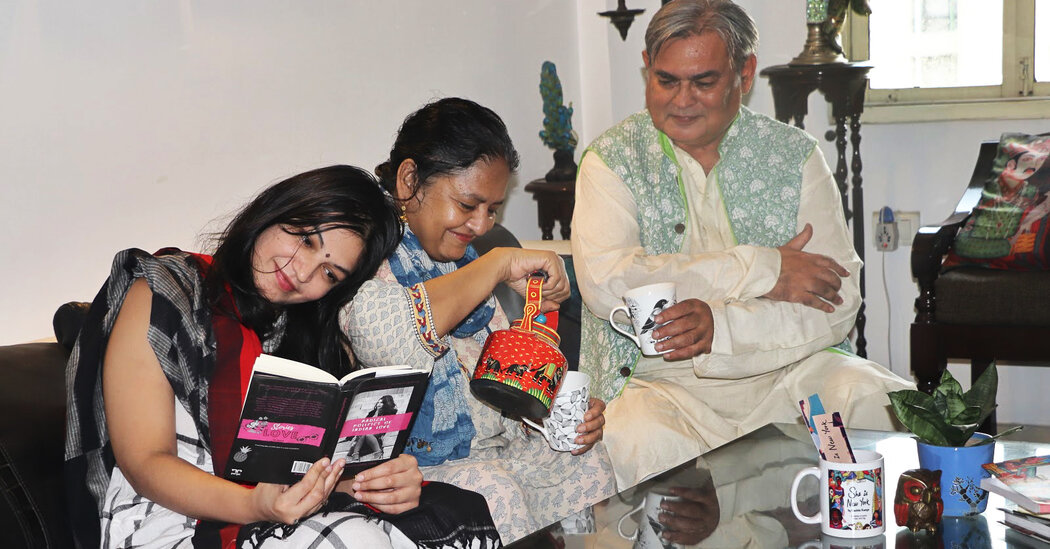 Infections are soaring. So are deaths. Whole cities are under lockdown. And the government seems powerless to help.

India is in the grip of a coronavirus crisis. Experts agree that the spread is probably even worse than the official statistics suggest. In many parts of the country, hospital beds, supplemental oxygen and other vital supplies are running short.

As Western countries roll out mass vaccination campaigns, only about 3 percent of India’s population is fully inoculated. Though conditions are slowly improving in New Delhi and Mumbai, the virus appears to be spreading largely unchecked through the rest of the country.

The New York Times asked readers in India to describe their lives in the midst of the pandemic with words and photos. They wrote about fear and loss, anxiety and boredom. Some wrote about their anger at the stumbling response by India’s government under Prime Minister Narendra Modi. But they also wrote about family and friends who have helped them cope, and efforts they have made to help neighbors and strangers alike.

‘You can’t leave it to the citizens to bear the brunt of a health care system that’s crumbling.’

“A lot of people my age have been helping people find resources like hospital beds, oxygen cylinders, medication, etc., through social media by verifying whatever leads are floating around on the internet and sending them to whoever needs them. I’ve been working with one such group. I realize that it is a necessary job in these times, but it’s also incredibly draining. It is the sign of a completely broken system that teenagers have to band together and work themselves to exhaustion trying to answer all these desperate pleas all over Twitter. And it’s getting harder to do by the day as things worsen because resources get exhausted very quickly. Most of the time we just end up calling a lot of numbers and get no response, and when we do it’s usually people saying there’s nothing they can do for us. It’s heartbreaking when people around are just suffering and dying and there’s so little you can do to help. We’re all terrified and burnt out and this is a very unsustainable system of getting people access to health care. You can’t leave it to the citizens to bear the brunt of a health care system that’s crumbling.” — Arunima Tiwari, New Delhi

‘I’m trying not to focus on what could have been.’

“I miss spontaneity. I hate that I now have to plan everything out and even when I do, the plans feel like they can just disappear. I’m trying not to focus on what could have been. Instead, I’m determined to stay focused on what I can do. I have reactivated my long-dormant social media accounts to amplify what I can, and I now volunteer at a response center that offers assistance to Covid-positive patients. I don’t have a choice but to help because elected authorities have made it loud and clear that they aren’t going to.” — Anindita Nayak, Bangalore

‘It’s hard to imagine this is actually real and happening.’

“Life in Delhi at the moment feels like you’re having an out-of-body experience. It’s hard to imagine this is actually real and happening. Every social media feed, every WhatsApp group is full of requests from people looking for oxygen, hospital beds, critical lifesaving medicines. The worst part: There’s almost nothing you can do to help anyone immediately. It takes hours of verifying, calling, begging for help to actually find some solutions, if that even happens. By that time, you feel almost too scared to call back and find out if help is still needed for fear of hearing the inevitable — that the person has died without getting adequate care. Indians are dying not because of Covid but because they’re not receiving treatment and care.” — Shweta Bahri, Delhi

‘I lost my mother yesterday.’

“Both my parents got Covid. I lost my mother yesterday. Father is on ventilator support. The reason I lost my mother is because she didn’t get treatment. I live in Bangalore, and there is no way you can get a bed in any hospital. The help line numbers never work. If they do, then they just take details or transfer your call with no help. Being completely helpless, I took my mother to a hospital that I’m not sure is even legitimate. They just wanted money from me. They did not have trained staff. Oxygen was always in short supply. I felt helpless that I could not take her anywhere. I knew that if I kept her there she would not survive. I had to bring my father there, and his condition deteriorated due to lack of oxygen. I managed to take him to a different hospital, but it was too late. Now he is on a ventilator.” — Paresh Patil, Bangalore

Rahul Patil died on May 17, Paresh Patil said, after this submission was received.

‘My extended family has been very helpful during this time.’

“It has been challenging, but I maintain a mood log throughout the day and encourage my family to do the same. I also post a mood meter on social media so people can reply with how they are feeling using an emoji and we can talk about it. I also help my parents with their medicines, food, oximeter and temperature readings. Since both have different sets of medications, it’s really important we keep a record of the medicines along with a chart of the vitals. My extended family has been very helpful during this time. They remain connected through calls and texts and remind us not to lose faith.” — Rachita Ramya, Delhi

‘We played dumb to something which we clearly saw coming.’

“Since I have been going to work every day, I have not really experienced the lockdown in terms of staying inside. But it has been a very stressful year when it comes to working. When the lockdown lifted last year, people immediately rushed into the bank where I work. It has been very difficult and almost impossible here, in a rural part of India, to make people understand the importance of masks and social distancing.”

“The government has done little to make people aware of the situation. Also, the lockdowns initially were more of a television ratings stunt rather than a precautionary measure. A lot of workers in banks have died on duty, and some have been denied leave even when they were sick. The precautionary measures on paper are nowhere close to reality. In the past few months, we played dumb to something which we clearly saw coming.” — Shweta Beniwal, Kolar

‘Three of us have now developed Covid symptoms.’

“As I type this out, four doors lay ajar or wide open in my home. Three of us have now developed Covid symptoms. My old dad has been taking care of cooking, cleaning, medicating and sanitizing all day. My dad sleeps in fits through the day and night, interrupted by calls for food, tea, hoarse coughing, and groans of pain and frustration. How do I cope? Each night, as a 21-year-old, lying wide-awake — the weather is unbearably hot, and my fever rarely subsides — I make up positive scenarios in my mind. Getting a job and earning enough to secure my family’s well-being in this cruel dog-eat-dog world. Being more bold, less hesitant, in fighting people who didn’t see the warning signs of a corrupt, inept distribution of resources. Slapping each of those complacent idiots who voted into power a ruthless demagogue who wins elections by stoking fear and resentment but is a dud when it comes to long-term policymaking, tough decision-making and leadership.” — Harmandeep Khera, Chandigarh

Since sending his submission, Mr. Khera said, he and his family have recovered.

‘Still frightening, but we are coping.’

“Many friends have been infected, and we call each other every day to share a joke and to stay positive and make plans to meet in the future. Still frightening, but we are coping. I also try to help people overcome disinformation and keep telling people that most of us who are infected will recover. I ask people to avoid panic buying and seeking unvalidated cures. Since last year I have exercised regularly and continue to do so even while infected and isolated. I am also a pistol shooter for my state of Maharashtra, so mental conditioning has been an important part of my training. I meditate for 10 minutes each day to stay positive.” — Raj Khalid, Mumbai

‘We need to hold on to humanity and have faith in whatever you believe in.’

“It is very frightening. Half of the people I know have been tested positive or have been previously infected. We haven’t stepped out of the house for the past two weeks, and it has taken a greater toll on our physical and mental health. The only rule is to avoid contact. If you want to keep your close ones safe, then you need to keep them away for a while. My mother is an essential worker, and I have seen her doing grocery shopping for many needy people who are quarantined. It’s something I’m proud of. In times like these, we need to hold on to humanity and have faith in whatever you believe in. Being an atheist, I have faith in science and myself.” — Akash Helia, Mumbai

Sorgente articolo:
What It’s Like to Be in India’s Covid-19 Crisis – The New York Times