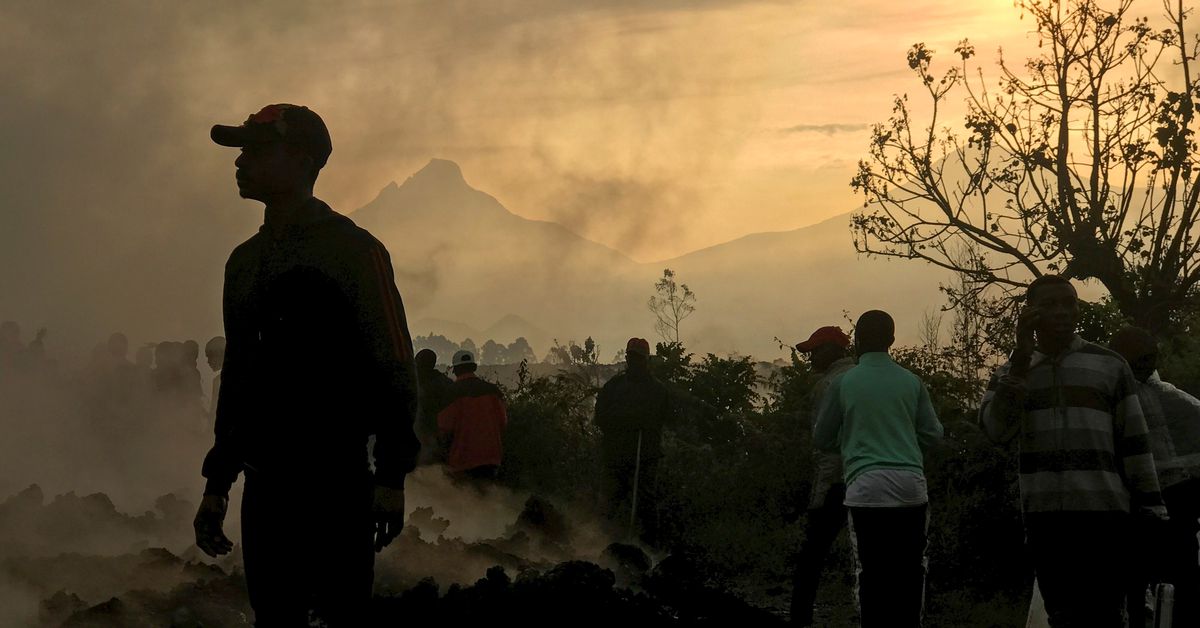 Repeated tremors shook the Congolese city of Goma on Monday, unnerving families still reeling from a volcano eruption at the weekend that destroyed nearby villages, displaced thousands and killed at least 32 people.

Mount Nyiragongo, one of the world’s most active and dangerous volcanoes, erupted on Saturday evening, sending a smouldering wall of lava half a mile wide downhill towards the city of 2 million people. read more

The lava flow stopped a few hundred metres short of the city limits, but wrecked 17 villages on the way, cut the principal electricity supply and blocked a major road, disrupting aid deliveries.

The death toll rose to 32 on Monday, including seven killed by lava, three by smoke, two asphyxiated by volcanic gas and four who died while trying to escape Munzenze prison in Goma, said Joseph Makundi, the head of civil defence in North Kivu province.

A string of small earthquakes has since struck the city, the surrounding region in eastern Democratic Republic of Congo and across the border into Rwanda.

One reached a 5.1 magnitude at 10:37 a.m. (0837 GMT) on Monday, according to the Rwanda Seismic Monitor, which is managed by the Rwanda Mines, Petroleum and Gas Board.

Shops briefly reopened in Goma on Monday but many closed again as the tremors grew more severe and residents worried that these could trigger another eruption.

Tremors struck every 30 minutes in the city from midday on Sunday. In Rwanda, a Reuters reporter saw several buildings damaged by the tremors.

Dario Tedesco, a volcanologist based in Goma, told Reuters the lava lake in the volcano has refilled, having emptied before the initial eruption on Saturday evening, although its significance was as yet unclear.

“The danger is small at the moment, but the earthquakes are an immediate danger as they could open another fracture, so this is why I’m a little bit worried. We have to be very careful,” he said.

“In view of the earthquake, which is becoming more severe, parents are asked not to send their children to school until further notice,” army spokesman Guillaume Ndjike said.

About 1,000 houses were destroyed and more than 5,000 people displaced by the eruption, the United Nations aid coordinator in Congo, Diego Zorrilla, told Reuters on Monday.

Goma is a hub for humanitarian aid in Congo’s east, but delivery efforts have been hindered by the closure of Goma’s airport, Zorrilla said, and it could be days before the main road from Goma to the north reopens, he added.

“We have humanitarian operations in North Kivu that target 1.4 million people, that risk being disrupted if access to and from Goma is not restored,” Zorrilla said.

The death toll could rise further. Residents told Reuters about relatives lying dead in the wreckage or missing. UNICEF said around 170 children were among the missing.

“I was at the market selling when the eruption happened. I had at first to gather the goods that I sell. When I arrived at the house, I found that the children had already fled,” said Sifa Ombeni, 30, a trader.

“I had lost hope, I went everywhere to all the hospitals, I even went to the morgue at the general hospital (in Goma). They even showed me the bodies of certain children. When they weren’t there it gave me some hope.”