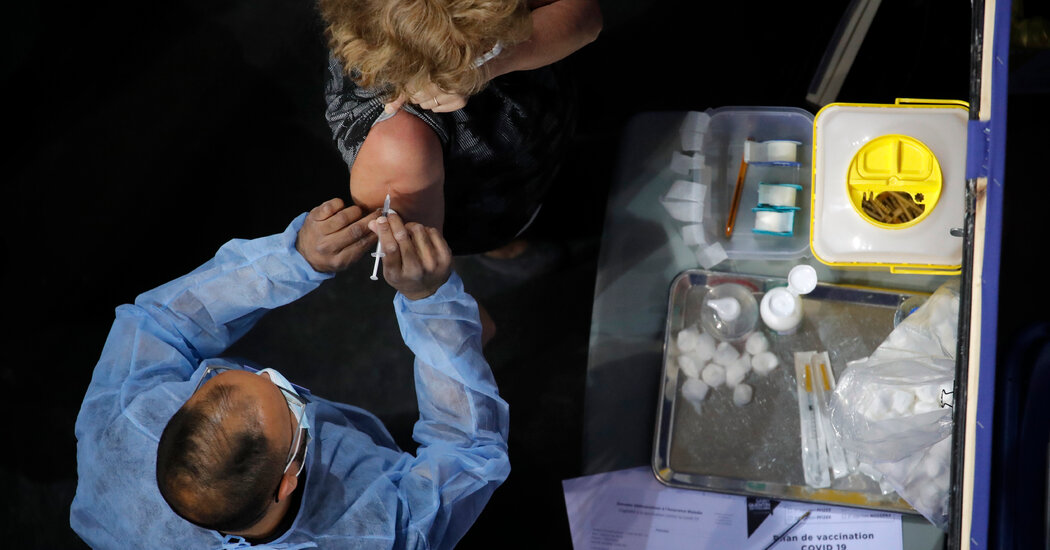 PARIS — The mysterious London public relations agency sent its pitch simultaneously to social media influencers in France and Germany: Claim that Pfizer’s Covid-19 vaccine is deadly and that regulators and the mainstream media are covering it up, the message read, and earn thousands of euros in easy money in exchange.

The claim is false. The purported agency, Fazze, has a website and describes itself as an “influencer marketing platform” connecting bloggers and advertisers. But when some of the influencers tried to find out who was running Fazze, the ephemeral trail appeared to lead to Russia.

“Unbelievable. The address of the London agency that contacted me is bogus,” Léo Grasset, a popular French health and science YouTuber with more than one million followers, wrote on Twitter Monday. “All the employees have weird LinkedIn profiles … which have been missing since this morning. Everyone has worked in Russia before.”

Mirko Drotschmann, a German health commentator with 1.5 million YouTube subscribers, said in a tweet that the P.R. agency had asked if he wanted to be part of an “information campaign” about Pfizer deaths in exchange for money. After doing some research, he concluded: “Agency headquarters: London. Residence of the CEO: Moscow.”

Their responses prompted two other social media influencers to come forward and say they, too, were approached last week with the offer of a “partnership” to criticize the Pfizer-BioNTech vaccine. One was offered 2,000 euros. It’s uncertain how many influencers received the solicitations, or if any acted on them.

And it’s not at all clear that there ever was a Fazze agency. Within hours of the questions on social media, the employee profiles on the agency’s LinkedIn account had disappeared, and someone scrubbed its Facebook page blank. Its Instagram account was made private. Its website offers no way to contact the company.

The French health minister, Olivier Véran, denounced the operation on Tuesday, calling it “pathetic and dangerous.” He did not elaborate on whether the government was investigating the matter.

While France is trying to speed efforts to achieve so-called herd immunity from Covid-19 before summer with faster vaccine rollouts, it remains one of Europe’s largest vaccine-sceptic countries, with nearly a third of its people saying they don’t want a jab. Since spring, many residents have refused to take the AstraZeneca vaccine after reports that it may cause blood clots, prompting the government to switch largely to Pfizer, which more people have been willing to accept. About 15 percent of the population has been fully vaccinated.

President Emmanuel Macron last week reopened restaurants, stores and other parts of the economy that had been more or less shuttered since November. He is betting that widespread immunization will be key to keeping the economy up and running, while luring tourists back after a devastating pandemic-induced recession. Any further outbreaks could lead to a reclosing of parts of the economy, his government has warned.

The messages from the so-called Fazze agency, in broken English, urged the social media influencers to create posts and videos on YouTube, TikTok and Instagram to “explain” that “the death rate among the vaccinated with Pfizer is almost 3x higher than the vaccinated by AstraZeneca.”

In Mr. Grasset’s case, a message from a person who identified himself as Anton boasted that the agency had a “quite considerable” budget for an “information campaign” about “Covid-19 and the vaccines offered to the European population, notably AstraZeneca and Pfizer.”

Mr. Grasset, who posted screenshots of the messages he received, said Anton had been willing to pay for 45- to 60-second videos on Instagram, TikTok or YouTube warning that the Pfizer vaccine was deadly. Anton also asked him to “act like you have the passion and interest in this topic,” while avoiding the terms “advertising” and “sponsored” in posts. “The material should be presented as your own independent view,” the pitch said.

“Encourage viewers to draw their own conclusions, take care of themselves and their loved ones,” the instructions continued.

The influencers described being urged to question why governments were buying the Pfizer vaccine, and to portray the European Union, which signed a deal last month for 1.8 billion doses of the Pfizer-BioNTech vaccine, as a monopoly that was causing harm to public health. They were also asked to tell their followers that “the mainstream media ignores this theme.”

Before the coronavirus broke out, Russian trolls were already using vaccine debates to sow discord, according to a 2018 study published in the American Journal of Public Health. Twitter accounts that Russian agents used to meddle in the 2016 presidential election also sent both pro- and anti-vaccine messages and insulted parents.

In April, a European Union report said Russian and Chinese media were systematically seeking to sow mistrust in Western Covid-19 vaccines in disinformation campaigns aimed at the West.