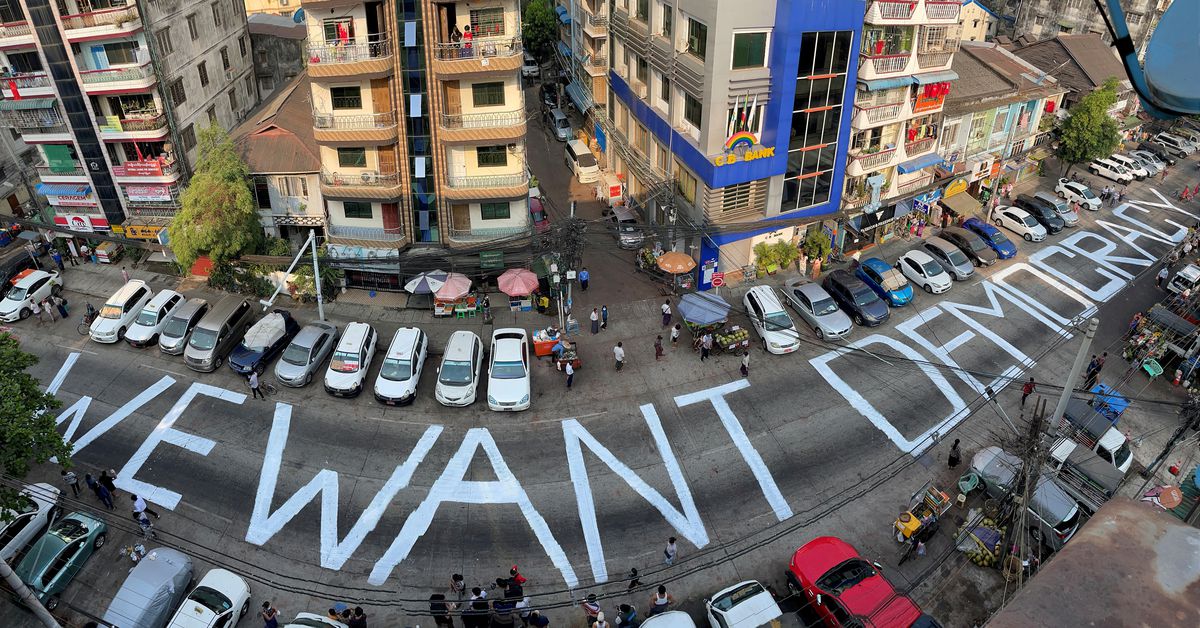 A slogan is written on a street as a protest after the coup in Yangon, Myanmar February 21, 2021. Picture taken with iPhone panoramic mode. REUTERS/Stringer/File Photo

Myanmar’s Roman Catholic leader has called for attacks on places of worship to end after he said four people had died and more than eight were wounded when a group of mainly women and children sought refuge in a church during fighting this week.

The conflict between the army and forces opposed to military rule has escalated in recent days in eastern Myanmar near the border of Shan and Kayah states, with dozens of security forces and local fighters killed, according to residents and media reports.

Thousands of civilians have also fled their homes due to the fighting and have also suffered casualties.

“It is with immense sorrow and pain, we record our anguish at the attack on innocent civilians, who sought refuge in Sacred Heart Church, Kayanthayar,” Cardinal Charles Maung Bo, who is the Archbishop of Yangon, said in a letter posted on Twitter.

The church in the district of Loikaw, the capital of Kayah State bordering Thailand, suffered extensive damage during the Sunday night attack, Bo said.

Myanmar is predominantly Buddhist but some areas including Kayah have large Christian communities.

“The violent acts, including continuous shelling, using heavy weaponary on a frightened group of largely women and children” had resulted in the casualties, he said.

“This needs to stop. We plead with you all…kindly do not escalate the war,” he said.

Bo said that churches, hospitals and schools were protected during conflict by international conventions.

He said the attack had prompted people to flee into the jungle with more than 20,000 now displaced and in urgent need of food, medicine and hygiene.

Another resident in the area trying to help displaced people estimated on Wednesday the number who had fled their homes had now risen to between 30,000 and 50,000 and were still using churches to shelter in.

“The elderly and children are in the churches. All the churches have put up white flags in order to stop the shelling,” said the 20-year-old, who asked not to be identified.

She said the situation remained tense in the area and accused the military of continuing to use heavy weapons against lightly armed local militia.

A junta spokesman did not answer phone calls seeking comment.

Myanmar has been in chaos since the army took power on Feb 1 and ousted the elected government of Aung San Suu Kyi, with daily protests, marches and strikes nationwide against the junta, which has struggled to impose order as opposition against it grows.

It has responded with lethal force, killing more than 800 people, according to the Assistance Association for Political Prisoners activist group. The military disputes this figure and coup leader Min Aung Hlaing recently said about 300 people had been killed in the unrest, including 47 police.

The military is also fighting on a growing number of fronts, against established ethnic minority armies, and rag-tag local militias formed in the past few weeks, many armed with rudimentary rifles and home-made weapons.

Min Aung Hlaing has played down the risk of violence spiralling into a bigger conflict.

“I don’t think there will be a civil war,” he told Hong Kong-based Chinese language broadcaster Phoenix Television Phoenix in a May 20 interview.