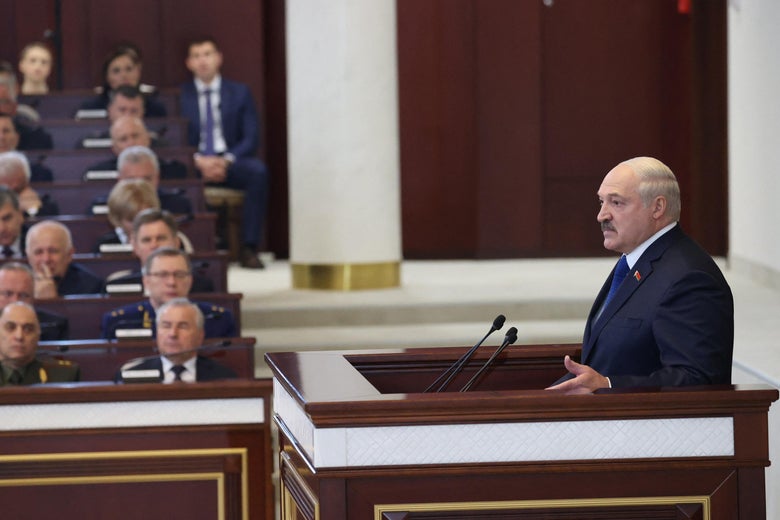 Belarus President Alexander Lukashenko defended his decision to intercept an international Ryanair flight over the weekend and force it to land, claiming in a speech to parliament that the country was under “hybrid attack” from western governments trying to “suffocate” it. Western governments have indeed condemned the brazen midair heist of a commercial jetliner, which by every measure appeared to target Roman Protasevich, a 26-year-old dissident journalist and vocal Lukashenko critic. Protasevich and his companion Sofia Sapega were subsequently arrested when the plane touched down in Minsk. The European Union responded, promising punitive measures and began lining up retaliatory sanctions against the regime, as well as revoked permission for Belarussian carriers to enter European airspace. “As we predicted, our ill-wishers from outside and inside the country have changed the methods of attacking the state,” Lukashenko said of the moves Wednesday. “No sooner had the plane landed in Minsk, carbon-copy accusations from the West and flight bans started pouring in.”

Lukashenko, an autocrat who has been propped up by the Kremlin for years, accused Brussels of plotting to target Russia next. The inflammatory and often contradictory statements pull directly from the Kremlin propaganda playbook, hinting at the close interplay of interests between the two regimes and the likely influence of Russian President Vladimir Putin, potentially in the former Soviet republic’s midair provocation. Using the language of the international community, making hazy justifications based on terrorism and national security, Lukashenko said he had acted in the state’s interest in commandeering the plane and arresting Protasevich, who has been branded a “terrorist” and subjected to criminal proceedings for organizing political protests following the disputed 2020 presidential election. The contest was widely considered a sham by outside observers and opposition parties and prompted protests in the country before a crackdown by the Lukashenko regime.

Lukashenko now says the military aircraft that was scrambled and intercepted the Ryanair flight, which had embarked from Athens and was already approaching its final destination in Vilnius, Lithuania, was to “provide communication” with the plane, not intimidate it into changing course. The Lukashenko government first said they approached the plane because there was a bomb on it, linking it to the militant Palestinian organization Hamas. On Wednesday, he indicated the bomb threat was relayed from Switzerland. “Hamas or no Hamas—it doesn’t matter today,” Lukashenko said. “I acted legally, protecting people, in accordance with all international rules.”

When the plane landed, shockingly, no bomb was found onboard. When asked about the developments in its neighbor, the Kremlin said it saw “no reason” to doubt the sincerity of Lukashenko’s terrorism claims. “We have not seen any denials,” Kremlin spokesman Dmitry Peskov said. “So far we have not even heard any statements from European countries to somehow work this situation out. They are just shooting from the hip.” The U.N. Security Council is expected to meet to discuss the incident Wednesday.

Sorgente articolo:
President of Belarus Is Shocked No One Believes His Flimsy Rationale for Hijacking a Commercial Airliner – Slate