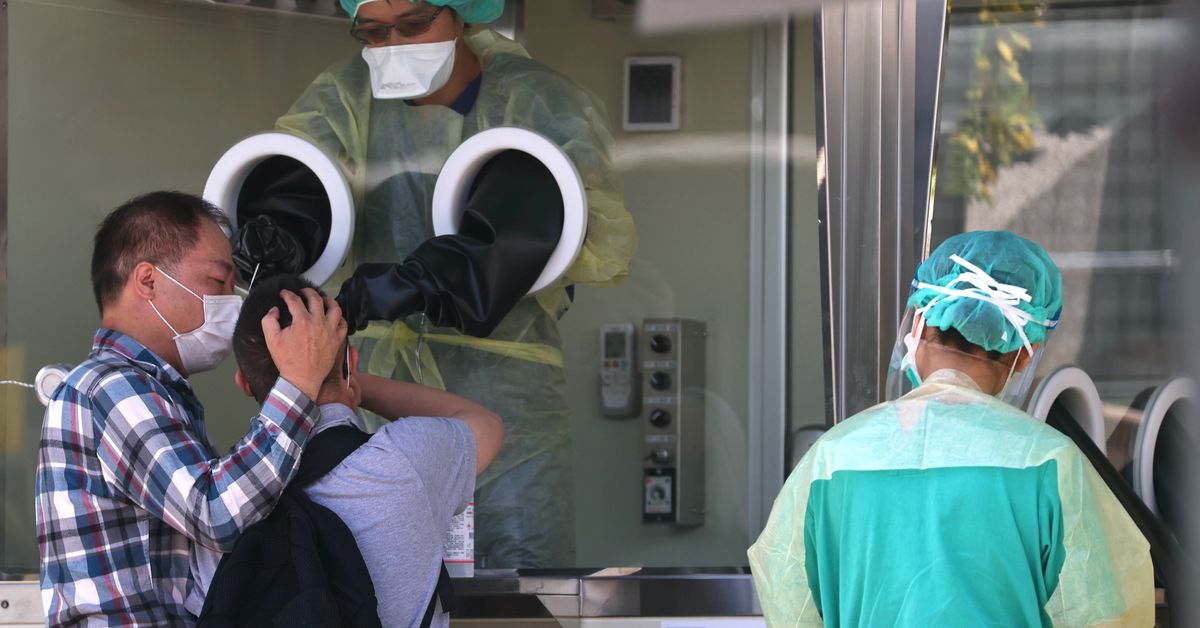 Medical workers use a rapid test for coronavirus disease (COVID-19) on a Taiwanese resident following an increasing number of locally transmitted cases in Taipei, Taiwan, May 25, 2021. REUTERS/Ann Wang

Taiwan directly accused China for the first time on Wednesday of blocking a deal with Germany’s BioNTech SE (22UAy.DE) for COVID-19 vaccines, in an escalating war of words after Beijing offered the shots to the island via a Chinese company.

Taiwan has millions of shots on order, from AstraZeneca Plc (AZN.L) and Moderna Inc (MRNA.O), but has received only slightly more than 700,000 to date, and has only been able to vaccinate about 1% of its population as COVID-19 cases surge.

While Taiwan has previously said it had been unable to sign a final contract with BioNTech, it had only implied that Chinese pressure was to blame. read more

China claims Taiwan as its territory and frequently puts pressure on countries and firms to curtail their dealings with the island.

President Tsai Ing-wen told a meeting of her ruling Democratic Progressive Party that orders for the AstraZeneca and Moderna shots had been “smoothly” booked.

“As for Germany’s BioNTech, we were close to completing the contract with the original German plant, but because of China’s intervention, up to now there’s been no way to complete it,” she said.

Taiwan, which has a population of more than 23 million people, had bought nearly 30 million shots, Tsai said, without giving details.

BioNTech, which sells its vaccine in partnership with Pfizer Inc (PFE.N), declined to comment on Tsai’s remarks, but added “we are supportive of global vaccine supply”.

China has denied trying to block vaccines for Taiwan and has offered to provide them to the island as a goodwill gesture.

At an online event hosted by the German Marshall Fund of the United States that also involved a U.S. and an EU official, Hsu said Taiwan was developing its own vaccine, but the earliest that would be ready for use was July. She repeated calls Taiwan has made for U.S and EU assistance.

“Because of the recent outbreak we desperately need vaccines … we do need assistance in getting vaccines before our domestic vaccine is ready for use, she said.

The top U.S. diplomat in Taipei, Brent Christensen, said on Wednesday he was confident Taiwan could control its spike in COVID-19 cases, noting its infection numbers remained quite low. He said the United States and Taipei were in talks on vaccines but did not say shots were on the way. read more

But Tsai said the island would only buy directly from the original manufacturers, or discuss purchases with them via the COVAX global vaccine sharing scheme.

China was “happy to see” Fosun’s willingness to provide vaccines to Taiwan, the Chinese office added.

Several Taiwan politicians have said the need for the Fosun shots was so urgent the government should bring them in.

But Taiwan’s Health Minister Chen Shih-chung told a daily news briefing Taiwan had seen no supporting documentation about Fosun’s version of the vaccine.

“Bring out the official documents and we can talk about it again.”