In footage first aired by Kan news, Janna Kiswani, 16, and several of her relatives can be seen stepping out of the door of their home in the flashpoint neighborhood of Sheikh Jarrah on May 18, as a protest was held nearby.

Video taken from a second angle shows officers outside the home, one of whom threatens “to give you one” if they didn’t go back inside.

As the family walks back inside, an officer fires his gun toward the home. In the first video, the girl is then seen collapsing after being struck in the back and can be heard crying out.

In the second video, the same officer then appears to remove a stun grenade from his vest, moments before it too was thrown into the home.

Janna’s father, Muhammad Kiswani, was also hit in the leg with a sponge-tipped bullet fired into the home, according to the Haaretz daily newspaper.

Police suspended the officer from “operational activities” until the matter was clarified and handed over materials to the Justice Ministry’s Police Internal Investigations Department (PIID).

As the PIID investigation concluded, with evidence and witness testimonies gathered, two other police officers were suspended for one week.

Two of the policemen were interrogated over the gunfire, while the others were suspected of obstruction of justice, Hebrew media reported Thursday morning. The questioned cops reportedly included two higher-ranking officers.

Since the incident Janna Kiswani has been in the hospital, where she is being treated for a fractured vertebra and breathing difficulties. Her recovery is expected to be lengthy.

“Right now I’m being treated by a neurologist and a surgeon, and in a few months I’ll start physical therapy,” Janna Kiswani told Kan.

Her father accused the officer of “wanting to commit murder.” 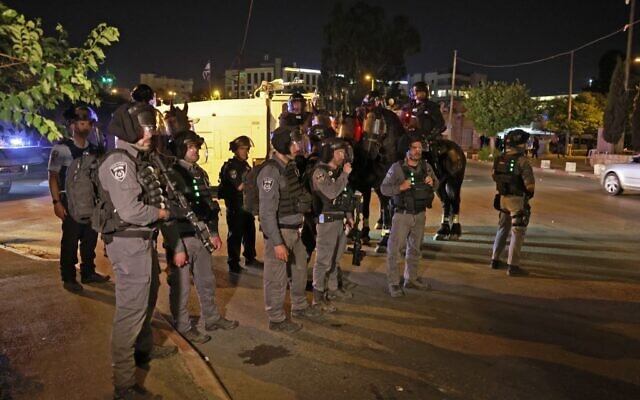 Illustrative: Israeli security forces in the Sheikh Jarrah neighborhood of East Jerusalem on May 8, 2021. (Menahem Kahana/AFP)

“In this complex time the police commissioner gives full backing to officers, but will not allow any deviation from police regulations,” sources close to Israel Police Commissioner Kobi Shabtai were quoted as saying.

The sponge-tipped bullets used by Israeli security forces are generally considered a type of “less lethal” ammunition, as they are less likely to kill a person hit by them than standard bullets, but they have still been responsible for a number of serious injuries and deaths, especially when they are aimed at a person’s head or chest.

Last year, a police officer was convicted for shooting a Palestinian in the back with a sponge-tipped bullet as he walked away from a West Bank checkpoint.

Sheikh Jarrah, where the Kiswanis live, has been at the center of recent protests over the pending eviction of several Palestinian families from homes claimed by Jewish nationalists as part of a years-long legal fight.

The Sheikh Jarrah eviction was a central reason for the major unrest in Jerusalem earlier this month that ended up sparking an 11-day conflict between Israel and terror groups in Gaza, after Hamas fired rockets at Jerusalem.

Sorgente articolo:
7 cops questioned over shooting of Sheikh Jarrah girl in back with sponge round – The Times of Israel