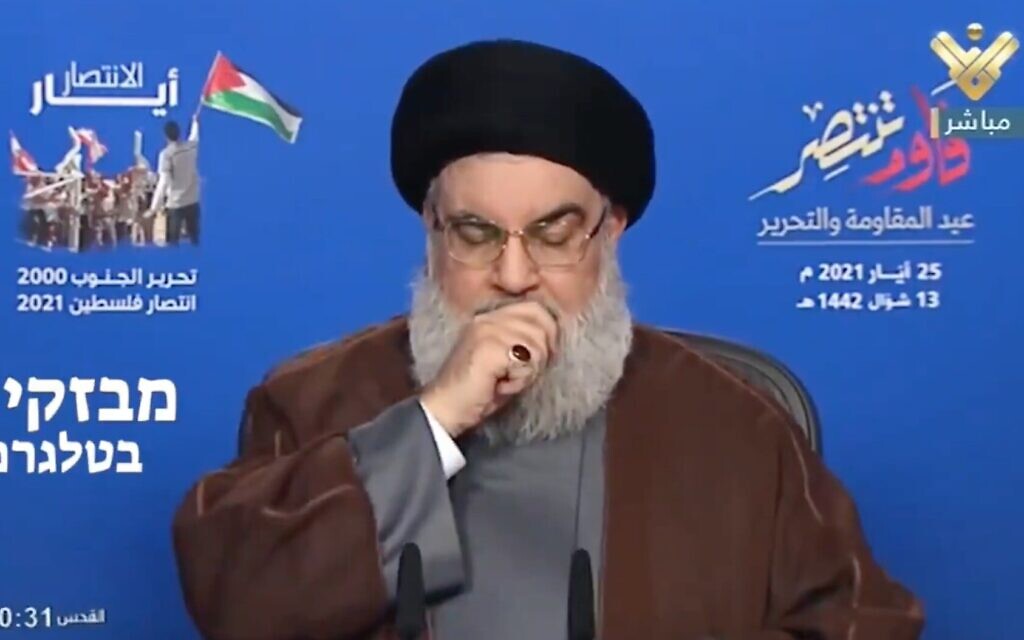 The Israeli military believes Hezbollah chief Hassan Nasrallah may have contracted the coronavirus, following a speech on Tuesday in which the terrorist leader was seen coughing and occasionally struggling for breath, The Times of Israel has learned.

The Israel Defense Forces’ assessment appeared to be largely based on circumstantial evidence as, according to Israel’s Channel 13, Nasrallah has not yet actually been tested for COVID-19.

During his speech, the terror leader threatened “regional war” if Israel attacked holy sites in Jerusalem.

“The Israelis must understand that breaching the holy city and Al-Aqsa mosque and sanctuaries won’t stop at Gaza resistance,” Nasrallah said, referring to the Temple Mount compound in Jerusalem’s Old City.

“Jerusalem means a regional war. All the resistance movements cannot stand by and watch this happening if the holy city is in real, grave danger,” he added.

The speech came on the 21st anniversary of the IDF’s withdrawal from southern Lebanon, following an 18-year occupation of the area, and days after Israel and the Hamas terror group fought an 11-day battle in and around the Gaza Strip, which began when the latter fired multiple rockets toward Jerusalem after Israeli police officers responded forcefully to a riot on the Temple Mount.

Israeli military officials derided the speech by Nasrallah, who appeared pale and weak on camera, calling it a mistake.

Hezbollah leader Hassan Nasrallah is speaking on TV, and he’s not looking well. Pale, thin, a bit breathless and coughing from time to time.

Hezbollah’s shadow loomed large during Israel and Hamas’s conflict, with the possibility it could unleash its arsenal of missiles — far more powerful than Hamas’s — in support of the Palestinians. But the Iran-backed group largely remained on the sidelines.

Though Hezbollah did not play an active part in the fighting, three barrages of rockets were fired toward Israel from southern Lebanon during the Gaza battle, which Israel believes Hezbollah at least tacitly approved.

Daily protests, including by members of Hezbollah and Palestinians in Lebanon, took place along the frontier with Israel in solidarity with Gaza. One Hezbollah member was killed when Israel opened fire to push back against protesters who tried to break through the volatile frontier.

Sorgente articolo:
After cough-filled speech, Israeli military hints Nasrallah may have COVID – The Times of Israel