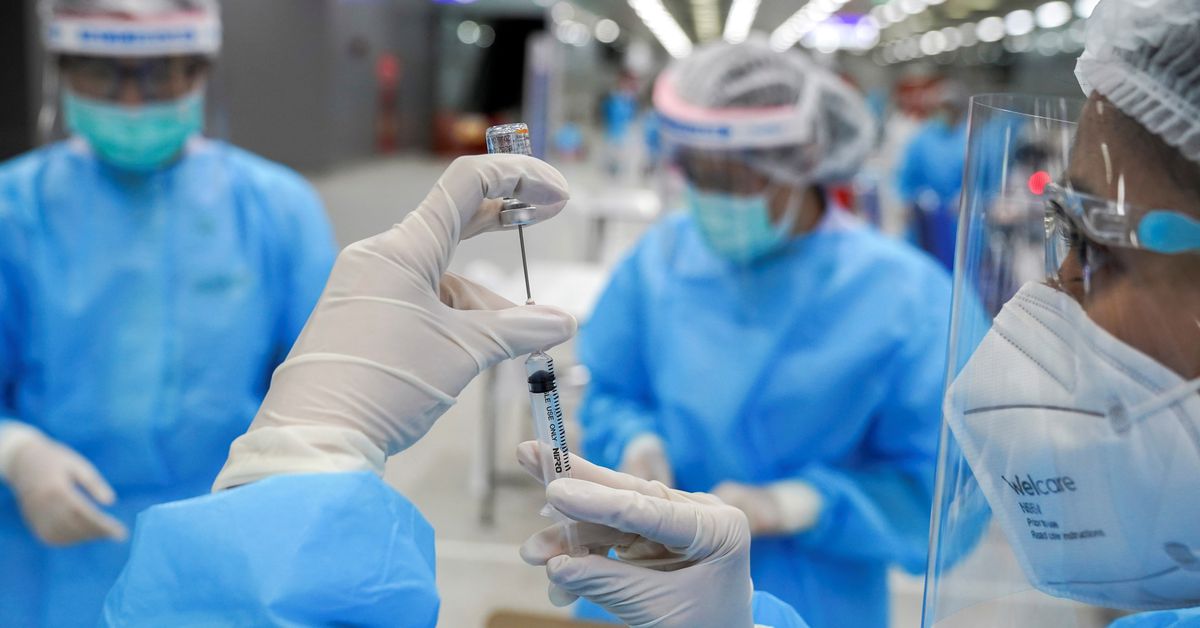 A medical worker prepares a syringe with a dose of China’s Sinovac coronavirus disease (COVID-19) vaccine at the Central Vaccination Center, inside the Bang Sue Grand Station, in Bangkok, Thailand, May 24, 2021. REUTERS/Athit Perawongmetha

The Thai king’s sister has approved coronavirus vaccine imports by an institution she sponsors, bypassing the government as it deals with surging infections and growing public anger over a slow and chaotic rollout.

The secretary-general of the Chulabhorn Royal Academy wrote on Facebook that the “alternative vaccines” would supplement the government campaign until it could meet the country’s needs.

The government has long insisted it must handle all vaccine imports and next month starts its mass immunisation drive, which relies heavily on AstraZeneca (AZN.L) vaccines manufactured locally by a company owned by the king.

The announcement in the official Royal Gazette took some in the military-backed government by surprise, and comes as Thailand suffers its most severe COVID-19 outbreak yet, and growing unease about the vaccine plan.

So far, less than 1 million of Thailand’s more than 66 million people have been fully vaccinated.

The decree was announced late on Tuesday and expanded the Chulabhorn Royal Academy’s ability to respond to coronavirus. It was signed by Princess Chulabhorn, its chairwoman and the youngest sibling of King Maha Vajiralongkorn.

“The Royal Academy will procure ‘alternative vaccines’ until vaccines that are produced in the country reach a capacity that can sufficiently protect against outbreaks,” its secretary-general, Nithi Mahanonda, posted on Facebook.

It was not immediately clear how many vaccines the academy would import and when.

The government is expecting to have available 6 million AstraZeneca doses and 3 million doses of the Sinovac (SVA.O) vaccine next month, as it starts its main drive to inoculate 70% of its people by year-end.

Other private hospitals plan to buy 10 million doses of Moderna (MRNA.O) vaccines through a state-run company.

Health Minister Anutin Charnvirakul said he was unaware of the royal order before it was published.

“I just saw the announcement last night,” Anutin said when asked about it during a local television interview.

“But if it is a benefit to the country, we are ready.”

The Chulabhorn Royal Academy, which includes a hospital and research institute, has organised a news conference for Friday about what it said was its importation of the vaccine of Sinopharm. Thailand is expected to approve the Chinese vaccine for emergency use this week.

Fuadi Pitsuwan, a scholar at the School of Public Policy at Chiang Mai University, said the royal procurement “risks subjecting the Chulabhorn Royal Academy to politicisation and by extension, the princess herself.”

“It’s a move brought about by the incompetence of the government,” he said.