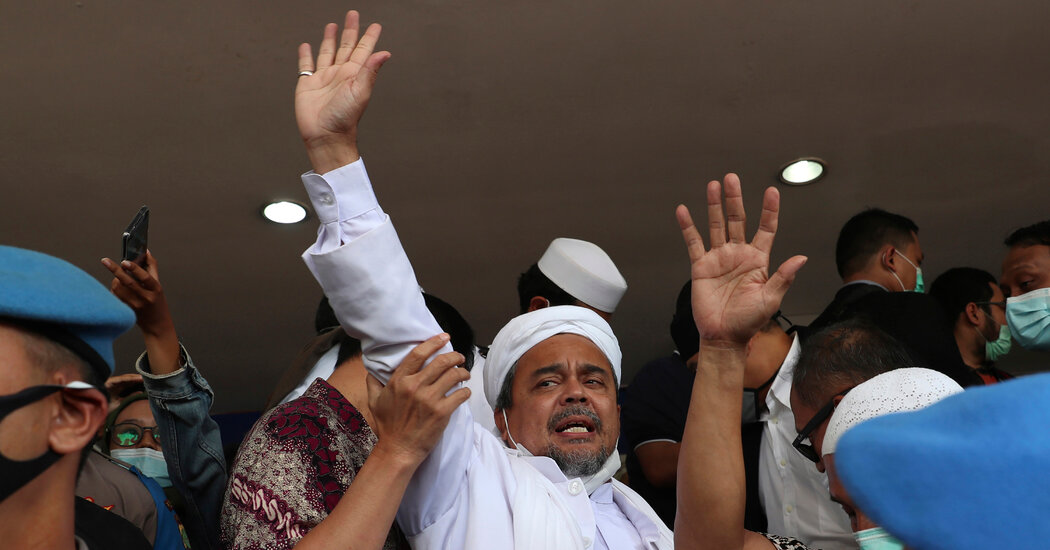 The fiery Islamic cleric Rizieq Shihab, who returned to Indonesia last year from self-imposed exile pledging to lead a “moral revolution,” was sentenced to eight months in prison on Thursday for attracting people to attend mass gatherings in violation of coronavirus protocols.

A three-judge panel in Jakarta, the Indonesian capital, found Mr. Rizieq guilty of drawing thousands of followers to two large events after he returned in November from Saudi Arabia, where he had fled in 2017 to avoid a pornography charge. That charge was later dropped but could be reinstated.

On his arrival in Indonesia, Mr. Rizieq, 55, was welcomed as a returning hero by his followers. Many thousands of people thronged Jakarta’s international airport to receive him. Soon after, he attracted thousands more to his daughter’s wedding and an event straight after where he preached about his vision of Islamic law for Indonesia.

Mr. Rizieq, the leader of the Islamic Defenders Front, a prominent Islamic group known for its extremism, has been branded “a thug” by his critics. But his ability to attract crowds and his radical message could pose a political threat to Indonesia’s president, Joko Widodo.

Mr. Rizieq, who claims to be a descendant of the Prophet Muhammad, could be freed from prison relatively soon, since he has already served nearly six months while awaiting trial and may be eligible for a reduced sentence for good behavior.

Things turned sour for Mr. Rizieq within weeks of his return from Saudi Arabia. The police accused him of violating limits on public gatherings by inviting people to attend the wedding and preaching event in Jakarta and by attracting followers to the breaking of ground for a mosque in the nearby city of Bogor.

Soon after, six of his followers were shot and killed by undercover officers who had been trailing them. The police said that the men had attacked the officers, who fired in self-defense. The Islamic Defenders Front said that the men were bodyguards for Mr. Rizieq.

On Dec. 12, 32 days after he returned to Indonesia, Mr. Rizieq surrendered to the police on the coronavirus protocol charges. By the end of the month, the government had outlawed the Islamic Defenders Front, which he co-founded in 1998.

On Thursday, 2,300 police officers and soldiers were deployed around the courthouse to provide security.

The judges sentenced him to eight months in prison for the wedding-day gathering, which they found was linked to a surge in coronavirus cases, and ordered him to pay a $1,400 fine for the mosque groundbreaking.

Indonesia, the world’s fourth-most populous country, with about 275 million people, has reported almost 1.8 million coronavirus cases and nearly 50,000 deaths, more than any other Southeast Asian country.