Prime Minister Benjamin Netanyahu on Wednesday denounced French Foreign Minister Jean-Yves Le Drian for saying earlier this week that Israel is at risk of “long-lasting apartheid” if a Palestinian state is not established.

Le Drian, whose remarks made him one of the first senior French officials to use the term “apartheid” in reference to Israel, was referring to Palestinians but also to violent riots by Arab Israelis that erupted in multiple cities and towns amid the recent fighting with terror groups in Gaza.

Speaking at an event in Tel Aviv, Netanyahu expressed “a strong protest against the French government and the outrageous comments of the French foreign minister on television.”

He rejected Le Drian’s comments as “an insolent, false claim that has no basis. In the State of Israel, all citizens are equal before the law, regardless of their ethnicity. Israel is a beacon of democracy and human rights in our region… We will not suffer any hypocritical and false moral rebukes on this matter.” 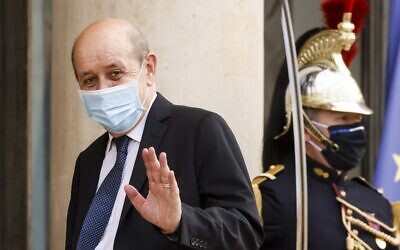 French European and Foreign Affairs Minister Jean-Yves Le Drian arrives for a dinner at the Elysee Presidential Palace in Paris, on May 17, 2021. (Ludovic Marin/AFP)

In the Sunday interview, Le Drian said the “risk of apartheid is high,” if Israel were to continue to act “according to a single-state logic,” and also if it were to maintain the status quo.

“Even the status quo produces that,” he said.

The term apartheid refers to the white supremacist oppression of blacks in South Africa from 1948 to 1991.

Israel has long adamantly denied apartheid accusations, saying its Arab minority enjoys full civil rights, as well as the term “occupation” to describe its activities in the West Bank and Gaza. It views Gaza, from which it withdrew soldiers and settlers in 2005, as a hostile entity ruled by the Islamic terror group Hamas, and it considers the West Bank to be disputed territory subject to peace negotiations — which collapsed more than a decade ago. Israel also points to the existence of the internationally recognized Palestinian Authority, which administers parts of the West Bank under the Oslo Accords.

The past weeks saw escalating ethnic tensions between Jews and Arabs inside Israeli cities alongside the armed conflict with Gaza terror groups. Protests by Arab Israelis against Israeli policies in Jerusalem and Gaza exploded into violent mob attacks. Jewish extremists struck back with revenge attacks.

Two people, one Arab and one Jewish, were killed in separate incidents in the city of Lod, and dozens were injured in clashes across the country, many of them seriously.